Scroll down to learn about what termites look like, their behavior, how to control them, and more.

Termites can be a homeowner's worst nightmare. They can cause significant structural damage to homes, which often goes unnoticed until costly repairs are needed. However, knowing the warning signs of a termite infestation can help you take the right steps toward preventing or mitigating the problem.

Read on to learn more about termites, how to identify them, some of the more common species of termites in the United States, as well as the signs of a termite infestation in your home.

Termites are small insects that are usually less than a half-inch in length. These insects live in colonies with their own hierarchies. Termite colonies can vary in size, including just two termites -- a king and queen -- to a few hundred individuals. However, mature termite colonies can contain 60,000 to 1 million termites, depending on the type of termite colony. These large colonies can quickly cause damage to wooden structures.

In addition to a king and queen, colonies are comprised of several other castes of termites, including reproductives, workers and soldiers. When a reproductive termite is ready to reproduce, it gains wings and flies off to mate and start a new colony. These male and female reproductive termites are called “alates" or “swarmers." While alates have wings, worker and soldier termites remain wingless.

Termites are found all around the world and there are more than 2,000 species. Approximately 50 of these species can be found in the United States, with roughly 20 species of termites that are classified as structural pests that can cause damage to property. Termites feed on wood for the cellulose -- the main ingredient in paper, cardboard, and wood.

In order to know if you have a termite problem, you must first be able to recognize what a termite looks like. Though there are many species of termites, these insects do tend to have a few characteristics in common. Here's what to look for when identifying termites:

What types of termites live in the U.S.?

There are a few different types of termites that call the United States home. To the untrained eye, these species may look the same. Below, we'll take a look at some of the most common types of destructive termites in the U.S., their behavior patterns and more so you can better learn to spot termite activity in your home.

This species of termite can range between ⅜ to ½ inch in length. These termites often leave behind mud tubes in the foundation of a home. Other telltale signs of an eastern subterranean termite infestation include hollowed wood (tap on it and listen for the sound) and blistered flooring. 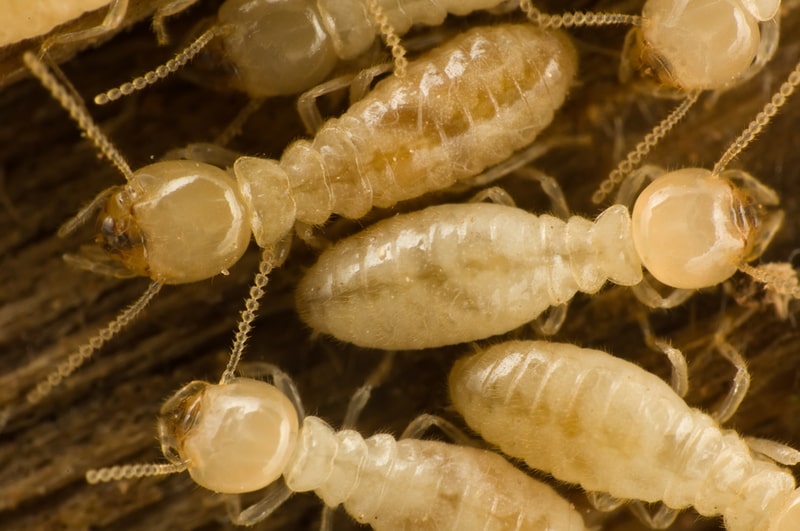 Like all other termite species, the Formosan termite is able to tell light from dark and stays in darker places to avoid predators. However, Formosan termites are especially destructive. They can eat anything containing cellulose, including wooden structures, trees, cardboard, and paper. And Formosan termite colonies generally grow quicker and are more destructive to homes.

Drywood termites don't live underground, meaning they can be found in different places in your home than the subterranean termites. Alates are roughly ½ inches in length, while soldiers are often ⅜ inches long. They can range between pale brown to dark brown or light yellow-tan in color. The winged alates can often be translucent or smokey grey in color.

Drywood termites are most common in warmer climates, particularly a narrow swath of land along the southern border of the U.S. One distinguishing feature of drywood termites is that they eat across the grain of wood, eating the harder layers compared to other species of termites that prefer softer layers. While these voracious termites will devour anything with cellulose found in wooden home foundation materials, you can also find signs of them in trees and fences as well.

Signs of termites in your home

Though it can be tricky to spot a termite infestation in your home, there are a few things you can look out for. Here are the most common signs of termites: 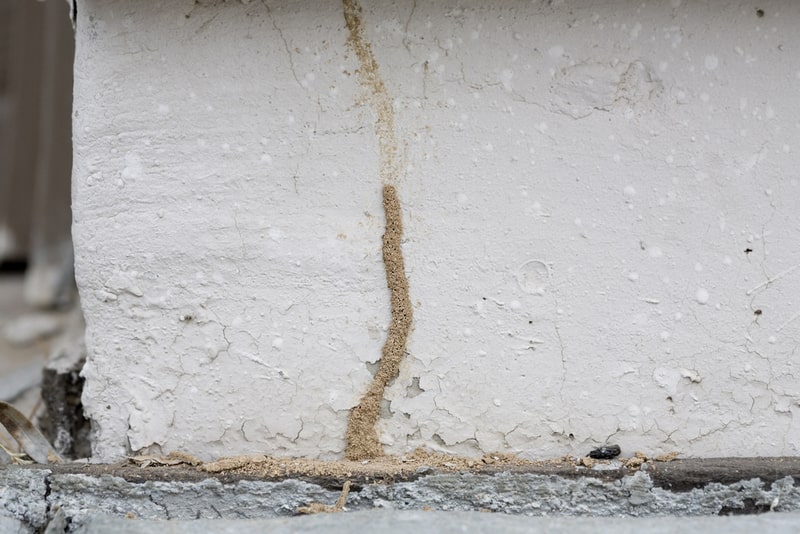 Termite damage is distinct, and you'll be able to recognize it by the "waffled" or layered appearance of damaged wood. Termites can damage wooden walls, furniture and trees on your property. They will hollow these structures out, tunneling through them, leaving holes and empty spaces behind. Keep an eye out for small holes, hollow wood and anything that resembles water damage on wooden surfaces. Similarly, looking for mud tubes in walls, fences and other wooden structures may be among the telltale signs of termite damage.

What to do if you have termites in your house

The warning signs of a termite infestation are easy to miss if you don't know what to look for. If you've noticed some of the signs above, chances are, your home may already be infested. It can be difficult to get rid of termites on your own, especially if the infestation is already more advanced. The best thing you can do is hire a termite control professional to tend to the problem.

If you're wondering what to do if you find termites, your best bet is to call a professional. When you call in termite control professionals, they'll be able to recognize the type of termite in your home, and how far the infestation has progressed. They will also be able to help take care of it before the termites cause further damage.

Get started with termite control
Frequently Asked Termite Questions
What are the first signs of termites?

One of the first signs of termites can be mud tubes. Subterranean termites will build mud tubes to protect themselves from the sun and air as they find a food source. You may see these tubes that are about the width of a pencil around the foundation of your home. If you do, contact a professional immediately.

What attracts termites to a house?

How big are termites?

How long do termites live in a house?

Termites can live in a home for as long as conditions are right and they are not disturbed. That means that a colony can keep growing and growing to up to 1 million termites if left alone. These pests are difficult to detect as they usually live underground and out of sight. The only way to be sure you don't have termites in your home is to partner with a termite treatment professional.

How fast can termites destroy a house?

The termites' large colonies paired with their voracious appetites make for a formidable pest. The specific timeframe that termites need in order to cause damage can vary based on several factors. However, a colony of only about 60,000 termites could eat about two feet of a 2x4 piece of wood in about 5 months. That kind of damage could be costly over time, if left untreated.

1Treatment and terms defined in your Plan. Applies only to subterranean termites. Limitations apply. See Plan for details.

2THE NIX & FIX TERMITE GUARANTEE IS AVAILABLE FOR QUALIFYING HOMES ONLY. Applies only to subterranean termites. Not available in all areas. Limitations apply. See Plan for details.

Most Destructive Types of Termites and Areas They Are Found

How to Identify Termites

How Long Is a Termite Lifespan?

Top 5 Termite Signs to Look For in Your Home