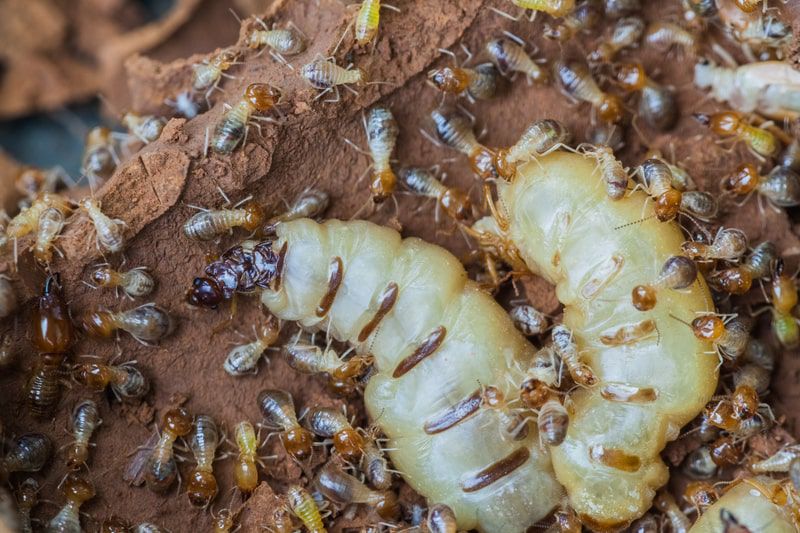 Termites are some of the most destructive insects that homeowners have to worry about. They can feed on your house, burrowing into the wood and threatening the structural integrity by nesting in the building itself.

But that damage doesn't happen overnight. It takes time and, in most instances, it's not until the termite colony takes up residence in your home that you even realize you may have a serious problem on your hands.

So how do colonies form, and what should you look for when you're checking for evidence of termites in your house?

How termite colonies are formed

Like many nesting insects, termites are social creatures. They form large colonies based on a hierarchy or caste structure that is comprised of three main groups: reproductives, workers and soldiers. Each caste or group takes care of a different job within the colony.

A typical termite colony will have a single pair of reproductives: the king and the queen. The termite king and queen produce pheromones, scents that signal nesting and mating, that spread throughout the colony to prevent the worker termites from becoming reproductive adults.

Depending on the species, a colony will contain several forms or castes of termites, including immature termites, workers, soldiers, nymphs and reproductives. The queen starts the colony and lays all the eggs until the colony reaches a certain size. She then allows some of the immature termites to develop into secondary queens which lay the additional eggs needed to keep the colony thriving. Let's delve more into the inner workings of a termite colony, exploring the roles within the hierarchy and how they interact with one another.

In termite colonies, workers are wingless and soft-bodied. They often comprise the largest group within a colony, and are most frequently seen when infested wood is disturbed.

In some termite colonies, it is actually the immature termites or the sterile adults that are the workers instead.

The workers take care of eggs and immature termites (nymphs), forage for food, feed and groom nest mates and take care of the building and maintenance of the colony structures.

Soldiers are the protectors of a colony. They can vary greatly in appearance from other members of the termite colony and are typically larger.

They may also have darker heads and larger mandibles than workers. Soldiers guard the termite colony and defend it against predators.

Reproductives are the termites that procreate. They look different from the others in that they often have darker bodies.

At maturity, they initially have two pairs of wings of equal size and are called alates. After the swarming flight, they shed their wings and establish new colonies.

The queen is largest in physical size, attaining mass several times that of workers. Her main function is to lay eggs, sometimes thousands in a single day.

In some termite colonies, other individuals are capable of replacing kings or queens if they die. But it's the queen's job to control the population and manage the growth of the colony over time.

After mating, the new king and queen spend the rest of their lives underground being fed by the worker termites. The new queen lays her first batch of six to 12 eggs within a few days or weeks of mating, establishing a new termite colony. A mature queen can lay thousands of eggs each year.

The termite king is the other half of the reproductive equation. He helps keep the colony viable and strong. He's smaller than the queen and typically remains about the size of an average worker termite. The main distinction lies in his darker coloring.

Beyond supporting colony growth and structure, the role of the termite king is largely unknown. But it is clear that the colony wouldn't grow and thrive without his help.

The new colony has the capacity to produce its own reproductives and develop rapidly as an independent colony. Unfortunately, those colonies can pop up just about anywhere on your property, not just near the original colony.

Termites can take up residence in your house, underground or in your landscaping, and they're able to establish themselves without maintaining contact with their original colony.

Subterranean colonies are the most common. This is because termites love the cool, humid environments found deep beneath the surface.

Once underground, subterranean termites have the appropriate humid conditions to thrive. But they exist on cellulose, the organic compound found in wood and plant matter. If wooden deck posts, steps or door frames touch the ground, termites get easy access from their underground homes to a food source. But they can also access the wood in your home via cracks in your foundation or by building exterior mud tubes that act as highways for workers to travel from the colony to the wood food source.

Though underground nests are the most common, termites can and will occassionally form nests in your house. It all depends on the species common in your area and the risk factors inside your house. Aside from subterranean termites, others that can damage your home include:

Unlike subterranean termites, drywood termites do not need to live in moist soil to survive. As their name suggests, they ingest dry wood. This might mean taking up residence in a fallen log or dead tree on your property, but often it means moving into the lumber within your house. There, they can do serious damage to your home.

Dampwood termites prefer moist, humid or even fully wet environments. When they're forming a termite nest in your home, they look for damp areas. This could be wood that's been damaged by a leak or wood in basements and crawl spaces where humidity levels keep the wood moist.

Like drywood termites, dampwood termites can live completely inside the wood that they eat.

How do termite colonies expand?

Established subterranean termite colonies typically mature in about six to seven years and after that they are ready to expand. At that time, alates (swarmers) are produced. Termite swarmers are male and female reproductive members of the colony and can be brown-black to pale reddish-brown in color depending on the species. They're generally about 1/4" to 3/8" long, with pale or smoke-gray wings. During late winter or early spring, male and female swarmers leave their nest on a mating flight with thousands or even millions of other winged termites.

The swarmers are poor fliers, so they usually only fly a few yards from their old nest. However, they may be carried great distances by the wind. Winged termites can land on the roofs of buildings and sometimes move inside. Many of the alates are eaten by frogs, lizards, birds or spiders during this mating flight, so relatively few alates survive to find nesting sites, reproduce and form new colonies. The termite colonies produce many alates so that at least a few survive the mating flight.

What happens during the flight?

Male and female swarmers pair up during the mating flight. The female alate releases a pheromone to attract a male for nesting and mating. The winged termites shed their wings shortly after landing and spend the rest of their lives without flight. The male and female termite couple look for a nesting site near moist soil.

As the colony increases in size, the queen may allow more non-swarming reproductives to help produce enough workers to feed the colony. Mature termite colonies typically contain 60,000 to 1 million termites.

What does that mean for your home?

If you see winged termites or other evidence of termites inside or near your house, you probably have a termite colony nearby. That means it's time to call your Terminix® specialist for a termite inspection and treatment.

Termites differ from many other insects in that they live in organized social colonies. A termite colony can vary in size from only two termites (a king and queen) to a million or more. The sooner you can deal with the infestation, the better.

Termite infestations can happen anywhere, at any time. It doesn't mean you're neglecting your house or that there's something inherently wrong in your property. But it does mean you'll want to take care of the problem as quickly as possible.

Contact Terminix to schedule a free termite inspection and let our termite control professionals create a treatment plan for your home. Whether you're dealing with an active infestation or simply want to keep termites from becoming a problem in the first place, our team can help.