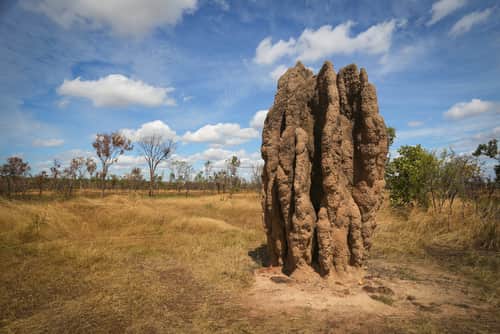 However, what might not be as well known is that termites are extraordinary architects and builders and termite mounds have long been a curiosity of humans. Complex above ground mound structures do not occur in all geographic regions. Some termite species, including all of the species in the United States, do not build above ground mounds, but exist entirely underground. In South America, Africa and Australia, some species of termites can build mounds up to 26 feet high. In some cases, termite mounds can take up to five years to build and termites are constantly repairing damaged areas.

WHY DO SUCH SMALL INSECTS NEED TO BUILD SUCH LARGE HOUSES?
Termites live in large colonies and must maintain acceptable levels of temperature, moisture and respiratory gases (e.g., carbon dioxide) to survive. In some termite colonies that live symbiotically with fungi, a temperature of about 86 degrees Fahrenheit must be maintained for optimal growth and survival. Inside the termite mounds are air channels that promote ventilation and circulation of air to increase gas exchange and improve thermoregulation. The fungi receive food, water and shelter from the termites in exchange for their digestion of cellulose for the termites.

Heat is produced by the fungi and termites and this heat must be dissipated to maintain an acceptable temperature. In general, there are thin buttress-like “chimneys” surrounding the wider core of the mound. In savannah-type environments, the outer chimneys are warmer and release heat during the sunny daytime hours, while the core is warmer during nighttime. Some scientists believe that, during daytime hours, the warmer air rises through the chimneys and pushes cooler air down into the core, hence providing ventilation. Other scientists believe that the smaller tunnels allow external air to flow in and out of the mound, hence introducing fresh air and maintaining the mound’s appropriate temperature.

The termite young and fungus inhabit the lower levels of the mound, but termites will travel to the upper parts of the mound to repair areas that have become damaged by weather or other means.

HOW DOES TERMITE NEST BUILDING WORK?
Termite mounds are primarily composed of termite saliva, feces and clay. Termites carefully construct mounds that are composed of a series of tunnels for air flow and also traveling when they are foraging for food.

Scientists have described the nest building in a common South American termite, Cornitermes cumulans (Kosarinsky 2011). The beginning stages of this termite colony’s nest is subterranean with a small portion above ground made of sand and clay materials. As the termites continue to build up the mound, the microstructure and wall porosity changes with height and, in this case, the termites built a mound about 1.5 meters high. The walls are very porous, hence facilitating air flow.

In many cases, nature (e.g., insects) can provide insight into human-mediated design. Some architects and engineers are studying the structures of termite mounds to potentially design buildings (particularly high rises) with greater energy efficiency. The way in which the mounds are constructed to provide internal ventilation may be useful for future designs to reduce the need for air conditioning.