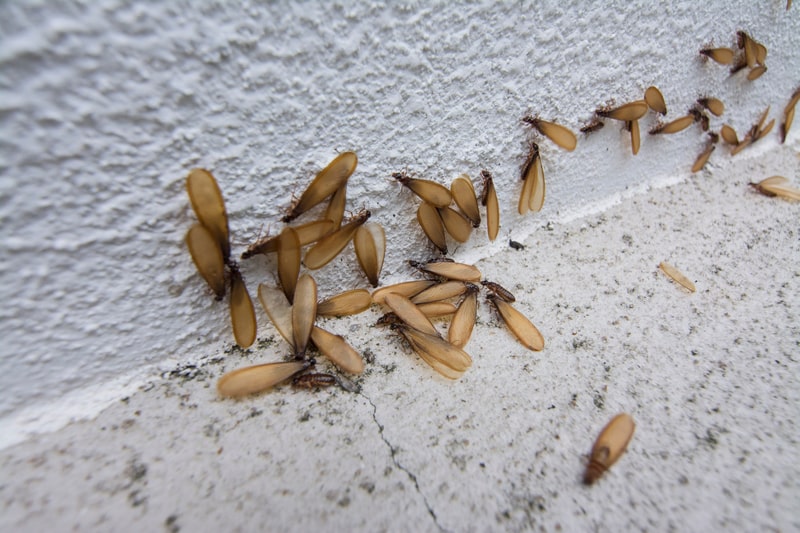 What are termite swarmers?

Swarmers typically only emerge at certain times of year. However, their presence inside your home can be a surefire sign that termites have taken up residence within your walls and may be expanding their reach. Learn more about the warning signs of termites, what swarmers look like, their mating habits and what to do if you suspect termites in your home.

Swarmers can be found among all species of termites, including those most common in the United States, such as drywood termites, subterranean termites, and dampwood termites. 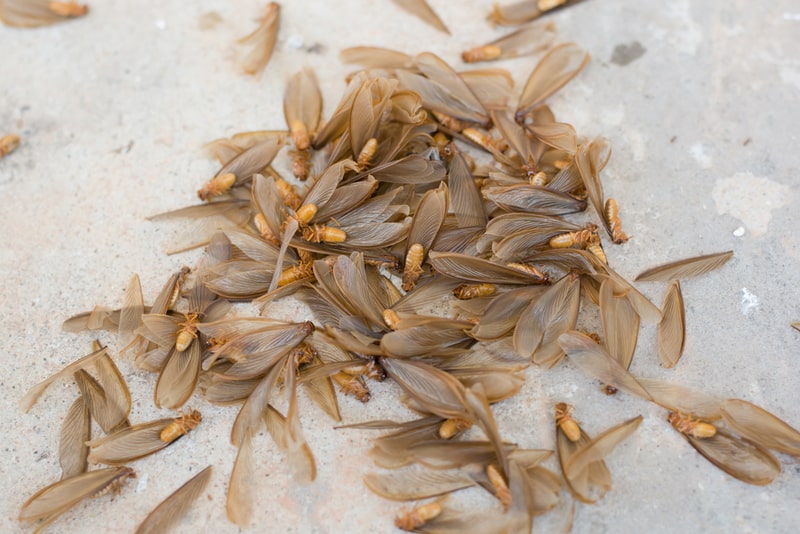 Although swarmer termites look similar to winged ants, there are a few key differences. Termite swarmers have four wings (a front and back pair) that are equal in size, straight antennae and a broad waist. By contrast, winged ant swarmers have a much narrower waist than termite swarmers. Additionally, flying ants have a larger set of forewings and smaller set of rear wings and bent antennae.

Why do termites swarm?

The purpose of termite swarming is to begin new colonies. As a colony matures, it begins to produce alate nymphs that will develop into swarmers with wings. Swarmers fly from the colony during the spring or summer when conditions are just right. After their wings drop off, a pair will find a suitable location to mate and start a new colony.

The female member in each of these new partnerships becomes the queen of her new colony. She lays her eggs, which eventually hatch and become workers in the colony. Some of the young termites will develop into soldiers and will be tasked with defending the queen and the other members of the colony.

Why is it called a swarm?

This mating flight is called a ‟swarm" because of the sheer number of flying termites emerging from the colony. Most species produce large numbers of flying termites to ensure enough will survive to continue the species. Swarming termites do not fly very well and many fall prey to common predators such as birds and other insects. Some are carried off by wind currents, smashing into cars and trees. In fact, only about 10 percent of the actual number of swarming termites survive this mating ritual.

During certain times of the year, termite swarmers come out in full force. These swarmers leave their underground nests to fly away and locate mates. When is termite season? When they swarm depends on the species of termite, the geographic location and is fairly weather dependent. Eastern subterranean termites usually swarm in the spring on a warm day following a rain event, first in the more southern states and then further north as temperatures rise.

Another factor that triggers swarming - the maturity of a colony. There is no specific age at which a termite colony swarms, but subterranean termite colonies typically do not produce a swarm until they are at least three years old.

Before and during swarm season (February through May)

February through May is generally considered termite swarm season, a period of time during which termites leave their established, mature colonies in search of new areas to colonize. These months are typically characterized by warm, moist weather, which is favorable to termite swarmers.

A few months after swarm season

One to two years after swarm season

The queen can live up to 30-plus years and the colony can survive much longer as other queens take over when previous queens die. That's why it's imperative to stop termites from ever establishing themselves in your home. But, it all begins with swarm season. Learn the signs of a termite infestation and what you can do to nip the problem in the bud.

What if termites swarm inside my house?

It's not uncommon for termites to swarm inside of a structure. Alternatively, you might only see a few alates that found their way inside. So, why do termites swarm inside your home in the first place? If termites swarm from within your home, it's a good indication your house may have an infestation. Termites swarming inside your home tend to gather around light fixtures and windowsills because they are looking for a way out of the house to form another colony. Their instinct is to fly toward lighted areas.

Does killing the swarmers solve my termite problem?

Unfortunately, no. Swarming termites are not the colony members that consume the cellulose found in wood, causing damage to your property. In actuality, the culprit that wreaks havoc on the wood in your home is the worker termite. Within the termite colony hierarchy, swarmers depend on the workers for food, which is done by regurgitating digested wood to the swarmers and other colony members. However, the offspring of these swarmers may one day become the worker termites of this new colony and continue a cycle of destruction within the walls of your home if left unchecked.

If you spot signs of termite swarms in or around your house, call a termite control professional to inspect your property to confirm if termites are present. When you schedule a free termite inspection with Terminix termite control specialists, our team will pay a visit to your home, evaluate the situation and recommend a customized treatment or protection solution to best target any termites in or around your home and keep these destructive pests at bay.

Termites: What To Do About Them

What Do Termites Eat?

What Happens to Termites in the Winter?

Where Do Termites Live?

Do Termites Have Eyes?

Did Termites Evolve From Cockroaches?

What Type Of Termites Are Flying Termites?

Top 12 Termite Signs to Look for in Your Home

Termite Damage and Repair in Ceilings and Drywall

Are There Termites In Your House Foundation?

Signs Of Termites In Trees: How To Check For Damage

How To Identify Termite Exit Holes

How to Prevent Termites When Building a New House

Types of Termites and Areas They Are Found