There are more than 2,000 species of termites in the world, but only about 50 of them are found in the United States. Of these, about 20 species fall into the category of structural pest. This means these types of termites are known to invade – and eat – wooden structures.

Alaska is the only U.S. state where termites are not found. A recent study published in the Science journal doubled down that termite activity aligns with warmer temperatures and increased rainfall. Termites thrive in warmer climates, so their activity is greatest in the South, Southeast, West and Southwest.

The three most important types of termites in the U.S. – in terms of activity and damage – are drywood, dampwood and subterranean termites.

Where are termites most common?

Hot, humid areas provide an ideal area to thrive — ideal for termites, that is. These areas aren't so ideal for homeowners stuck with the potential for the damage that can be caused by these pests.

Because of global warming, in the near future, termites will probably be able to thrive in some areas they previously could not. Areas of the U.S. that see moderate termite pressure, such as the mid-West, may eventually start to see higher termite pressure. These regions may also see the aggressive Formosan termite invade their area. Although previously only found around the Gulf coast, some areas on the southern Atlantic coast and parts of California, Formosan termite pressure could increase in other parts of the country if global warming persists.

To help homeowners see the level of termite pressure they are likely to experience based on where they live, we've created this map to show where termites are most prevalent, and what types of termites live in those areas: 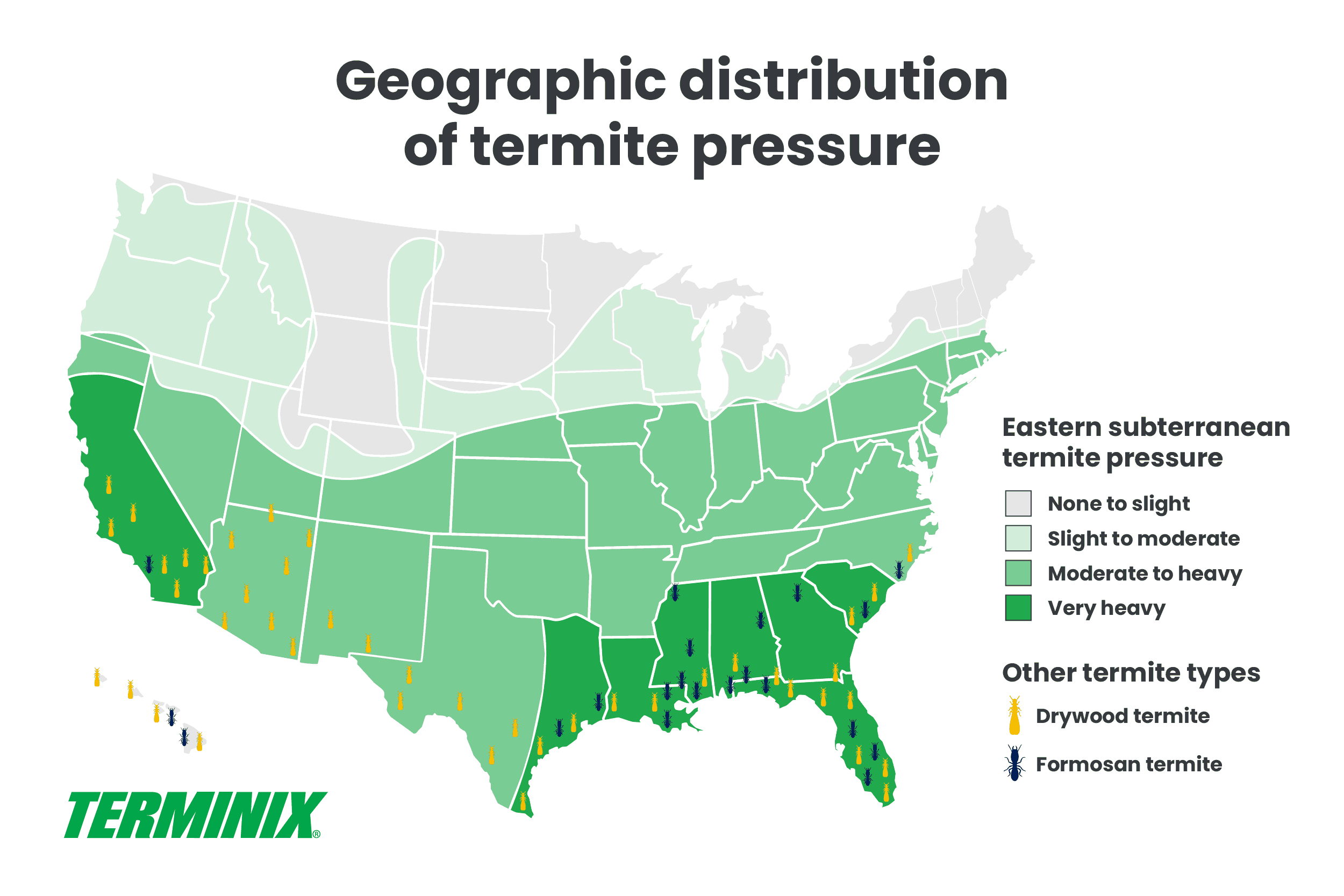 Because termites have been a longtime threat to the structural integrity of properties, the U.S. government has designated termite infestation probability zones (TIP zones). These areas were designed to “tip" off homeowners to areas where these pests may pose an infestation problem.

The TIP zone map is coded into four areas of termite activity:

These TIP zones are used by the U.S. Department of Housing and Urban Development (HUD) and even mortgage lenders to determine appraisals and property requirements for areas heavily impacted by the likelihood of termites in a given geographic area.

Colder portions of the country – such as several New England states, including Maine, and some of the states surrounding the Great Lakes fall into the Region 4 category with no to low termite activity. (Although not always pictured on a TIP zone map, Alaska falls into this grouping, as well.)

If you live where termites are most common and suspect these pests may be in your home, call Terminix® for a free termite inspection.

Termites: What To Do About Them

What Do Termites Eat?

What Happens to Termites in the Winter?

Where Do Termites Live?

Do Termites Have Eyes?

Did Termites Evolve From Cockroaches?

What Type Of Termites Are Flying Termites?

Top 12 Termite Signs to Look for in Your Home

Termite Damage and Repair in Ceilings and Drywall

Are There Termites In Your House Foundation?

Signs Of Termites In Trees: How To Check For Damage

How To Identify Termite Exit Holes

How to Prevent Termites When Building a New House

Types of Termites and Areas They Are Found