How Long Do Bugs Live?

How long do bugs live? That depends on several factors... 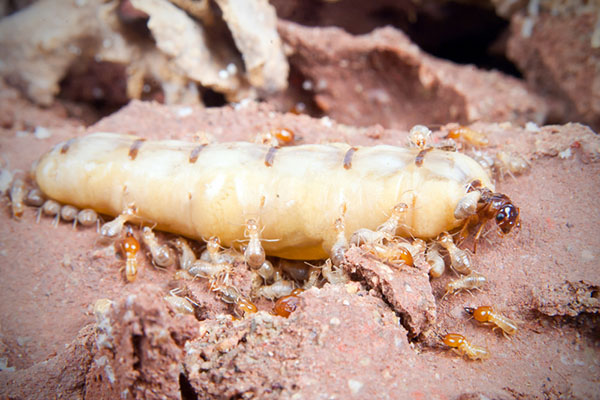 If there’s an insect fountain of youth, the termite queen (pictured above) must be drinking from it. Termite queens can live up to 50 years. Though some bug species can live to be old-timers, most live for only a few days or even a few hours. How long bugs live depends on several factors, including species, sex, caste and life cycle.

This chart shows how long different types of insects live compared to other animals. For more facts about the bugs you see in your house and how to control them, visit the Terminix Info Center. 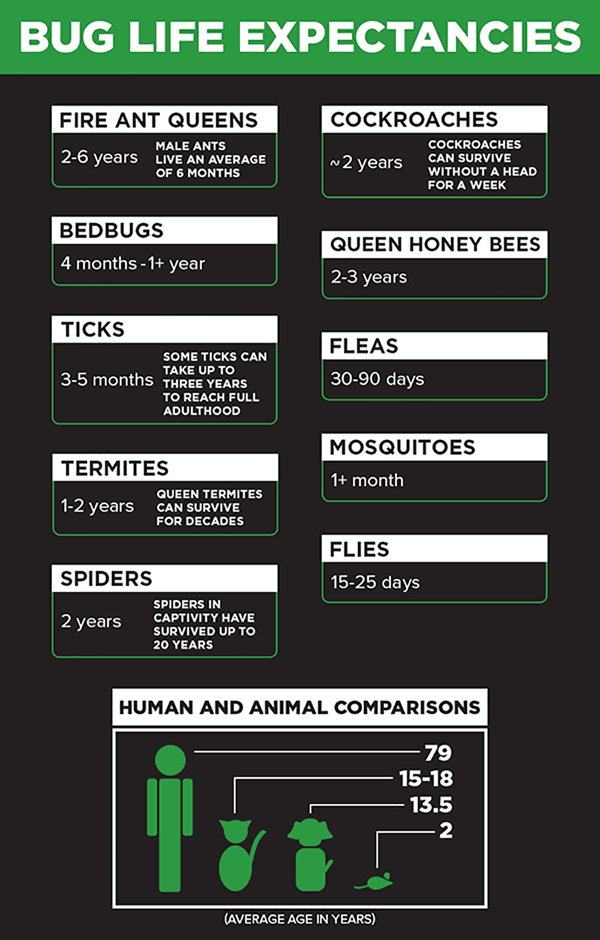 Although fire ant queens live between two and six years on average, the record is seven years. The male fire ant lifespan is much shorter, as they tend to live between one and six months.

The queen is the most important member of the colony, depositing up to 1,000 eggs a day. The sole function of the male is to mate with an unfertilized reproductive female. After mating occurs, the male dies.

An adult bed bug lives anywhere from four months to more than a year with the right conditions. Bed bugs can go an entire year without feeding, survive temperatures ranging between freezing and 122 degrees Fahrenheit and are constantly evolving, even adapting to resist standard insecticides.

A queen honey bee lives two to three years, on average, with a few species living up to five years.

On average, worker bees live for five to six weeks in the summer. During the winter months, a worker may live up to six months in order to help sustain the hive and raise new workers for spring.

A worker bee can only sting once and dies after stinging its victim. It stings to protect the hive or when it feels threatened.

The lifespan of the adult female German cockroach varies from 20 to 30 weeks.

The average lifespan for adult American cockroach females is about 440 days.

Adult American cockroaches can live approximately a year to a year and a half.

Fleas can travel through an entire life cycle (egg, larvae, pupae, adult) in as little as two weeks or as long as a year or more. Larval fleas spin cocoons to enter the pupal stage and can remain in their case until they sense the vibrations of food source nearby — this could be weeks. That's how fleas can suddenly seem to be everywhere — they've been waiting for the right moment to spring into adulthood.

Adult fleas can live roughly two weeks without a host, while their pupa can live for several months.

In fact, flies reach full adult maturity after just 12 days. Once mature, the female house fly can lay up to 150 eggs at a time in a batch. She can lay about five or six batches before she dies. Flies move quickly from egg (eight to 20 hours) to their three larval/maggot stage (taking three days to eight weeks depending on the climate) to the pupal stage (four to six days) and finally, to adulthood (approximately ten days).

It's interesting to note that the temperature can affect how quickly flies mature, as the warmer the weather the faster flies will grow and reproduce.

Adult female mosquitoes can live for more than one month. Males typically die one to two weeks after they become adults.

Female mosquitoes — the ones that bite — rely on blood meals to give them the nutrients they need to reproduce. After their blood meal, they lay their eggs — sometimes a single egg (certain Aedes mosquitoes), sometimes as many as 300 at a time (Culex spp.) — in or near bodies of water. Eggs hatch and become larvae or wigglers. Wigglers move into the pupal stage as quickly as their species and surrounding weather dictates, but typically a few days. Pupa become adults in just two to seven days and are then on the hunt for either nectar or blood to start the cycle over again.

Mosquitoes can spend anywhere from four days to one month in the water, which is why it's imperative to rid your property of standing water to help control the mosquito population.

Most spiders live about two years but some have been known to live up to 20 years when in captivity. Female spiders tend to live longer than male spiders.

Many male spiders reach maturity within two years and die after mating. This is often because female spiders eat them.

A worker termite may live from one to two years. A queen termite can live for decades, up to 50 years in some species.

Ticks can live as long as three to five months between each stage (egg, larva, nymph, adult). Ticks that require multiple molts before reaching maturity can take up to three years to reach full adulthood. Once a tick has reached maturity, its sole purpose is to reproduce.

A male tick will die soon after mating. Some female ticks lay one large batch of eggs before dying while others will lay a few smaller batches before reaching the end of their life.

By knowing the facts about the lifespan and habits of common household bugs, you can take steps to control them and keep them from jeopardizing your family's health or damaging your home.