Why Caterpillars Whistle: A Look At The Butterfly Life Cycle

Explore the fascinating butterfly life cycle, including the butterfly metamorphosis that caterpillars undergo and the defense mechanisms they rely on to reach maturity. 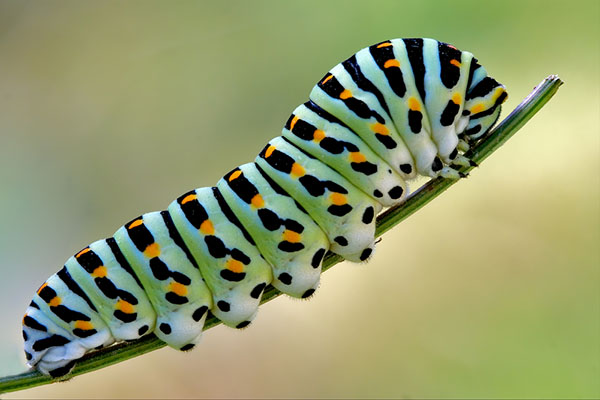 
Most of us are familiar with the brilliant-colored butterflies that can be seen landing on a flower or flying around in a grassy field. One of the most famous is the monarch butterfly. (See the monarch pictured below.) However, can caterpillars become moths? Yes. Caterpillars come in all shapes and sizes, and some of them will transform into moths.


Insects typically go through three stages of development: larval, pupal and adult. Caterpillars are the exception to this norm. They are simply moth or butterfly larvae.

Grand variation in coloring and environment aside, most caterpillars share the same basic anatomy, which includes a segmented body containing a head, thorax and abdomen. They are also unique in that they have two different types of legs: thoracic legs, which are jointed and have hooks that allow them to carry food, and prolegs, which are near the end of their bodies and have hooks that enable them to climb. Despite their plethora of legs, their short length means they offer caterpillars little protection from adversaries.

Physical adaptations as a biological defense


To evade predators, caterpillars have adapted in a variety of ways. Their biological defense mechanism depends on the type of predator they need to avoid. Common caterpillar predators include insect-eating species of birds, parasitic wasps, mice, snakes, bats, beetles, spiders, skunks, toads and frogs, ants, assassin bugs and even some parasitic fly species.

To the casual observer, a caterpillar’s bright coloring, fuzzy exterior and funny shape are a sight to behold. However, these same bright hues that we marvel at tell potential predators that the caterpillar is poisonous. In fact, many caterpillars defend themselves with venom that is released through the tips of fine hairs or spines on their bodies.

The caterpillar of certain species, including the monarch butterfly and pipevine swallowtail (check out the bug image), collect these poisons from the plants they eat, which they then secrete when threatened. In some cases, these toxic caterpillars stay in groups to give themselves a stronger chance against enemies. Others will fight back if caught – thrashing or biting their attackers. There are species of moth caterpillars that will use a “safety line” of silk to drop away from incoming predators, while others build small hiding places for shelter.

Three of the deadliest species are the giant silkworm, hickory tussock and saddleback caterpillars.

Giant silkworm caterpillar (Lonomia obliqua)
Found throughout South America, this caterpillar is potentially deadly. Accidental contact with its spines is enough to transmit substances so toxic, they can lead to kidney failure and bleeding in the brain. In Southern Brazil, the number of deaths as a result of Lonomia obliqua is so high it's considered an epidemic. 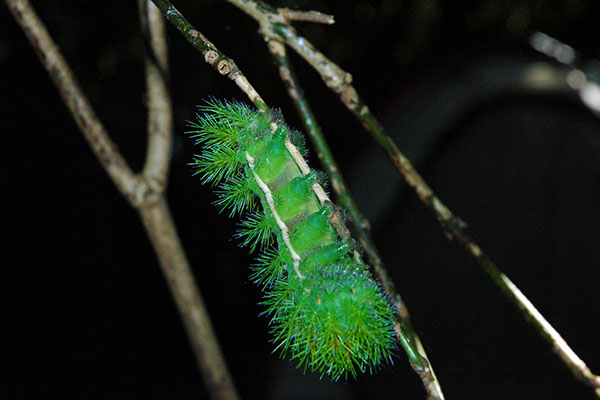 Hickory tussock caterpillar (Lophocampa caryae)
This white and black caterpillar is often described as wooly, which may make it endearing to some. However, a brush with this tussock moth could leave you with a rash, swelling and maybe even an upset stomach. 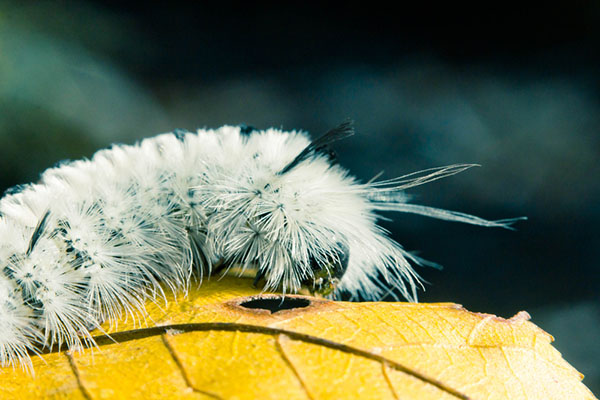 Saddleback caterpillar (Acharia stimulea)
The protruding horns and colored markings of this caterpillar, provide it with a particularly strong defense system. White spot marks at the head resemble large eyes to confuse predators, and hollowed out spines cover the horns, delivering a poisonous final message. 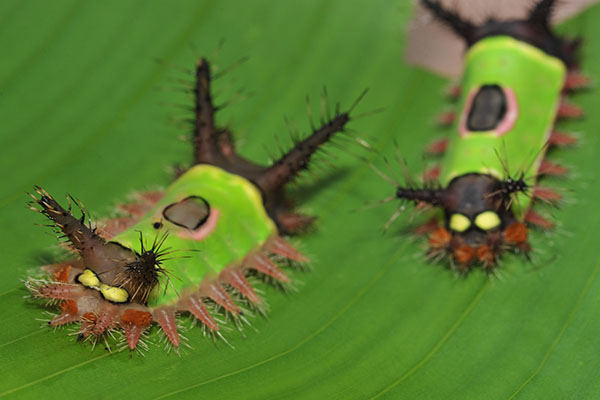 
Physical attributes aren’t the only way that caterpillars defend themselves. Some caterpillars have developed the ability to make whistling or clicking noises. This group includes the walnut sphinx moth (the caterpillar of which can whistle through holes in its sides) and the hickory tussock caterpillar, which emits an ultrasonic click when threatened.

Scientists were unable to understand why caterpillars whistle at first, but years of research has revealed that these noises are meant to mimic alarm sounds made by birds. The noise alerts birds to danger and prevents them from snapping up the caterpillars for a tasty treat. Some researchers say that the sounds also confuse bats.

Sharing science and nature with kids


It can be fascinating to learn about the life cycle of the caterpillar and its transition into a butterfly. Kids interested in learning more should check out the University of Michigan’s BioKids page.

Want to share some of the small wonders of science with your children? For a simple butterfly craft, consider having your kids make caterpillars out of clothes pins. Because caterpillars come in all shapes, sizes and colors, there’s no limit to what your kids can come up with. You can use the insect pictures in this post for inspiration.

When they are done, explain the life cycle of caterpillars to them. Then, put the “caterpillars” into a brown paper bag. Explain that when they wake up tomorrow, there will be a surprise waiting inside. When the kids are asleep, take two cupcake liners, and fold them into quarters. Clip the clothes pin in the middle of the folded liners, and add googly-eyed stickers if you’d like. Your kids will wake up to a butterfly metamorphosis.