Cricket Sounds: Why Do Crickets Chirp? 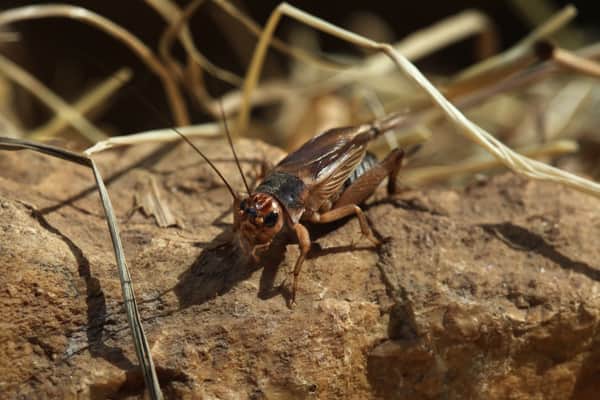 Cricket sounds: What do they mean?

Different cricket species produce different types of sounds. For instance, in Gryllus bimaculatus (field cricket), the chirping sounds can reach up to 100 decibels, while Gryllotalpa vineae (mole cricket) chirps at about 88 decibels. For comparison, a car’s horn reaches about 110 decibels, and referee whistles can be approximately 115–125 decibels.

Male crickets produce sounds by rubbing their leathery front wings together, i.e., file-like serrations on the wings’ edges rub against a sharp edge (scraper). This is called “stridulation” and is used to attract female crickets as mates. When this sound is being produced, the cricket’s wings are elevated. Each time the wings rub together, this is called a “pulse” and the pulse rate is impacted by factors such as temperature, e.g., faster rate during warmer temperatures. Pulse rate and the pattern of the pulses also differ between cricket species.

Both male and female crickets hear through ears that are located on their front legs. Female crickets do not produce sounds but will walk or fly to singing males, following a behavioral pattern called “phonotaxis” (movement toward a sound). In an outdoor environment, an approximately 5-decibel dB difference in the male cricket’s chirp can make the difference in whether a female moves (or does not move) in his direction (Hiertenlehner and Romer 2014). The same study noted that competing noises (from other male crickets and human sources) can impact the phonotaxis direction of female crickets.

What kind of sound makes a more attractive mate?

If several crickets are chirping at the same time, crickets will adjust the timing of the sounds produced. Studies have shown that male crickets leading the calls — rather than because of a certain call length or pattern — are more attractive to female crickets. A study on Gryllus pennsylvanicus (the fall field cricket) indicated that females of this species tend to choose older males (chirp for shorter pulse periods) as mates more frequently than younger males (Judge 2011). The same study hypothesizes that, in areas where females prefer older males, these males may be inhabiting areas with rich food resources and, consequently, live longer and produce songs more frequently.

A recent study showed that exterior noise level (e.g., road noise) may cause Oecanthus pellucens (tree cricket) to pause their chirping during periods of high noise, but these crickets do not change the frequency or length of the song (Orci et al. 2016).

Sounds can also be produced by male crickets to ward off enemies. This “alarm” sound may occur when a rival male enters another male’s territory.

The University of Florida provides a sampling of cricket sounds attributed to some different types of crickets here.

Cricket Sounds Can Be Risky for Crickets

Male crickets singing songs to attract (silent) females can also attract the attention of parasitoid predators. A certain type of parasitoid fly, the tachinid fly, listens for cricket sounds so she can lay her eggs on crickets. After the parasitoid fly eggs hatch into larvae and begin feeding on the cricket, the cricket dies within a week or so.