What is the Schmidt Sting Pain Index? It's no pain to explain. 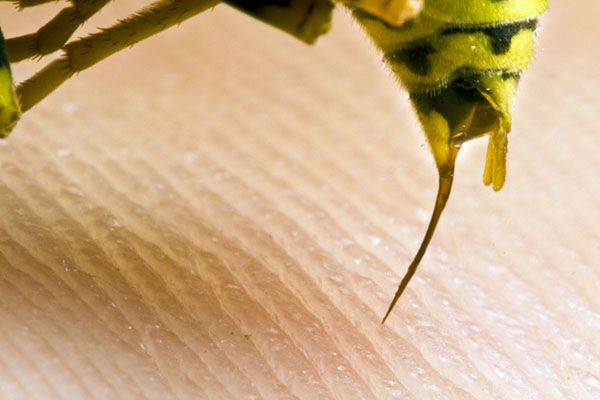 Some people are wine connoisseurs who can pinpoint the subtle differences between a Cabernet Sauvignon and a Cabernet Franc with a single swirl of a glass. But what do you call someone who applies this same level of attention to describing the various discomforts inflicted by insect stings? You call that someone Dr. Justin O. Schmidt, entomologist, and creator of the Schmidt Sting Pain Index.

Dr. Schmidt spent over a decade subjecting himself to bug bites and stings and describing his experiences with an almost poetic sensibility. Of course, Schmidt didn't begin his career intending to become an insect bite expert. Schmidt specializes in an order of insect known as hymenopterans: bees, wasps and their cousins and ants. Collecting specimens in the field, Schmidt found himself inevitably exposed to a wide array of painful pinches, jabs and defensive maneuvers. Over time, he assembled a scale of over 70 different stings, from the irritating (which rated a 0) to the excruciating (which rated a 4).

So, according to Dr. Schmidt, what’s the most painful insect bite or sting? Are the biggest, scariest bugs the most hurtful? And what do their stings feel like? Let's take a look at a few different insect bites and stings and where they rank on the Schmidt Index. 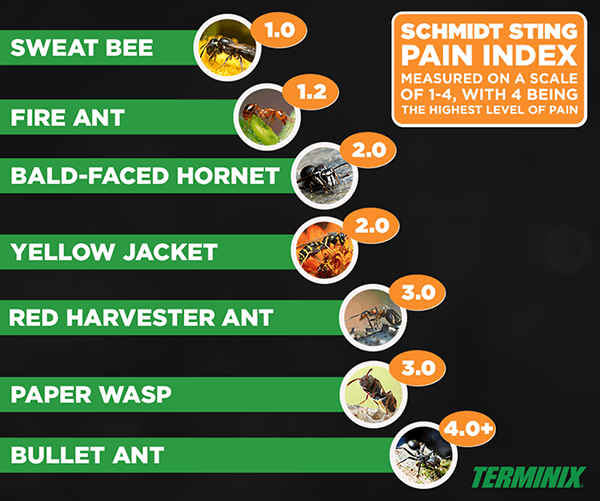 Here, the term "sweat bees" refers to several small bees in the family Halictidae, so-called because they're attracted to human perspiration. They rarely sting, but when they do, the results are pretty puny by Schmidt’s standards. In fact, his description of the sting — "light, ephemeral, almost fruity. As if a tiny spark has singed a single hair on your arm” — makes it sound more like a salsa you might need to go easy on.

Though fire ants are a common nuisance to anyone with a yard, Schmidt judges their venom to be relatively mild. (Schmidt is focusing here on the sting of a single fire ant, not an entire angry swarm.) Assuming you're not allergic to fire ants, expect a sting he describes as “sharp, sudden, mildly alarming. Like walking across a shag carpet and reaching for the light switch.”

A familiar sight to those living in the American South, the bald-faced hornet packs a punch. Schmidt describes this sting, which can throb for almost five minutes before subsiding, as “rich, hearty, slightly crunchy. Similar to getting your hand mashed in a revolving door.”

The yellow jacket wasp delivers a sting that can persist for up to 10 minutes. The character of the pain it produces is rather different from that of the bald-faced hornet, though both stings rate a 2 on the scale: “Hot and smoky, almost irreverent. Imagine W. C. Fields extinguishing a cigar on your tongue.”

You won’t likely encounter one of these large red harvester ants unless you live in New Mexico or Arizona, and that’s probably a good thing. Schmidt describes its sting, which can inflame your nerves for hours rather than minutes, as "bold and unrelenting. Somebody is using a drill to excavate your ingrown toenail.”

Paper wasps are another common species, and these territorial pests’ gray, honeycomb-like nests, can pop up under eaves or around porch areas in the summer months. Luckily, the pain of their sting can begin to fade after 15 minutes. Regardless, expect a pain that is “caustic and burning” with a “distinctly bitter aftertaste. Like spilling a beaker of hydrochloric acid on a paper cut.”

The good news? You’ll have to travel to some fairly exotic tropical locales in Central and South America to encounter this large black ant. The bad news? According to Schmidt, the pain of its sting is literally off the charts. Schmidt describes the bullet ant’s sting as incapacitating — it maintains its intensity for at least 12 hours, and often twice that. “Pure, intense, brilliant pain. Like fire-walking over flaming charcoal with a 3-inch rusty nail in your heel.”