Entomophobia: Why You May Be Afraid of Bugs

Does the mere mention of the word "bug" summon images of creepy crawlers? 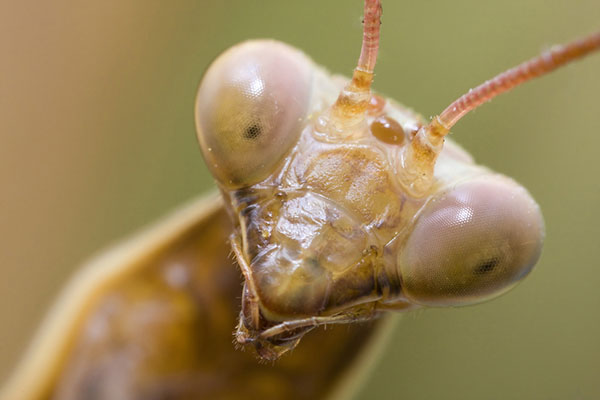 Does the sight of a cockroach scurrying across your kitchen floor fill you with dread? When you travel, do you obsess over the possibility that the hotel or resort where you're staying may be infested with bed bugs? Do you find yourself breaking out in a cold sweat as soon as you detect the telltale buzzing of some flying insect? Does the mere mention of the word "bug" summon images of creepy crawlers?


Friends and family may tease, and some may even accuse you of being a wimp. Embarrassment only compounds the problem. Why should something so insignificant creep you out so much? After all, most bugs are relatively harmless and are easily dispatched with a well-timed stomp or expertly aimed shot of insecticide. Besides, many bugs are actually beneficial. Who can imagine a garden without ladybugs and butterflies, or a summer night without fireflies and crickets?

However reassuring they may be in the abstract, logical arguments don’t help much when you find yourself paralyzed in the presence of a junebug. If your symptoms drastically affect your ability to live what you would consider a normal existence, your anxiety is no laughing matter. You may actually be suffering from entomophobia, which, according to the Turkish Journal of Parasitology, is an abnormal and persistent fear of insects. Like all phobias, entomophobia (or insectophobia) is a condition that is to be taken seriously. Just as we wouldn’t mock individuals who suffer crippling panic attacks in confined spaces (claustrophobia) or whose social anxiety is so severe that they can’t leave their homes (agoraphobia), we need to respect the distress associated with a phobia to insects.

The key to understanding entomophobia is the key to understanding any phobia. According to the National Institute of Health, a phobia is "an ongoing and unreasonable fear of a certain object, animal, activity, or situation that poses little to no actual danger." In other words, individuals suffering from phobias unconsciously or reflexively exaggerate the perceived threat of a particular stimulus (heights, the sight of blood, etc.). Almost every individual who suffers from a phobia underwent a formative experience with the source of his or her phobia. Maybe, as a toddler, you were stung by a wasp, or, a few years later, you began to associate certain insects (e.g., houseflies) with a contagion, illness or even the death of a loved one. Some scientific research even suggests that certain phobias may be at least partially hereditary or passed down from parent to child via some combination of genes and learned behaviors. Recent research detailing the therapeutic value of observing others successfully interact with common phobic materials supports this last claim.

So, phobias may actually be a sort of maladaptation. Meaning that while they may be rooted in behaviors that could have originally helped the human species survive, they now do more harm than good individuals experiencing phobias. Our earliest ancestors learned to fear predatory animals such as big cats (lions, tigers, leopards, etc.) for good reason. But what happens when this same response is applied to a situation that is not actually life threatening? Our wires become crossed, and each new encounter with the source of the original trauma only intensifies our fear and anxiety.

Treatments for phobias seek to untangle this stimulus-response relationship and again, per the NIH, "help you function effectively." If you seek professional help in coping with your entomophobia, the therapist may try a number of techniques to help you overcome your fear. It's most likely dependent on how severe your phobia is.

What are your earliest memories of insects? Once the origins of your phobia are established, the most common behavioral (non-pharmaceutical) prescription for alleviating the symptoms of your phobia is systematic desensitization. Also known as exposure therapy, this process involves introducing the patient to the actual source of their phobia. This introduction is administered carefully, gradually and under close supervision.

In the case of entomophobia, a therapist might work with you to construct a fear hierarchy. At the bottom of the scale, “least frightening,” might be a purely visual stimulus: the appearance of an anthill in your front yard or even a representation of a bug in an advertisement for extermination services. Further up the fear hierarchy, you may progress toward establishing greater intimacy with insects, such as letting an earwig inch its way across your hand. With each exposure, you also are taught self-relaxation techniques and other methods of managing your fear. Systematic desensitization is designed to help you not only better understand the reasons for your fear, but also to appreciate the ways in which your responses to the source of your fear are what psychologists call “incompatible.” Patients who have successfully completed a program of systematic desensitization report that they feel more independent and have more self-esteem than before they began the therapy.

Getting Over Your Fear Starts With Knowing More

Conquering your phobia, no matter its source, takes time, dedication and a commitment to educating yourself. And a pest control analogy helps to illustrate how. The more you, as a homeowner, know about the behavior of termites, the better prepared you are to defend your home against the damage they can do. Likewise, if you are willing to investigate what is causing your entomophobia, you’ve already begun to take the kind of initiative you need to put bugs in their place.