Why Are Bugs Attracted To Light?

Why are some bugs attracted to artificial light sources? We've got five theories for you. 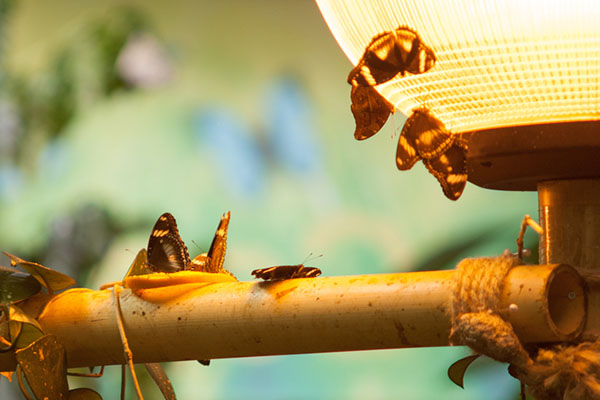 Phototaxis is how an organism responds to light with motion. Think about how you may have to rotate houseplants as they grow towards the window. That's an example of phototaxis. Many insects and bugs respond to light, as well. Bugs that move toward the light, like moths, are positively phototactic. On the other hand, bugs that run away from the light, such as cockroaches, are negatively phototactic. So what causes phototaxis in organisms? That's one of those issues that science hasn't really pinned down yet. However, there are some theories behind why insects react to light. Take a look at five ideas, ranked in random order.

Some flying insects, like monarch butterflies are migratory. One theory is that flying insects use the moon and stars to guide their internal navigation systems. It's similar to the way sailors navigated using star charts. So the thought is that maybe insects see your porch light, and think it's going to guide them home. And because they fly past the artificial light sources they've synched their navigation systems to, they get confused and fly in circles. This theory is hard to prove, though, because not all moths are migratory.

Theory 2: Looking for a Meal

A second theory as to why some bugs are attracted to light is that they're searching for food. Flower nectar is a food source for many moths, and flowers reflect ultraviolet (UV) light. So it makes sense moths would be attracted to bulbs that emit UV light. However, they're not very likely to find food around a porch light. That means a porch light swarming with hungry moths for you.

One idea put forth is that male moths think artificial light sources are potential mates. Apparently, female moths attract males with pheromones that just barely emit light. So some have conjectured that male moths might be attracted to candle flames because they think they're about to meet a female who's ready to mate. Instead, they get burned. Literally.

Yet another theory is that moths or other flying insects are attracted to artificial light sources as a way of escaping danger. In the wild, light means a path that isn't blocked by a predator. It also means a clear exit unhindered by obstacles. Therefore, it's possible moths fly smack into your outdoor lighting because they're trying to outfly a predator. The light makes them think their path is clear. Unfortunately, they're met with an unpleasant surprise.

You know how it takes a minute for your eyes to adjust to a dark room after someone turns the light off? Well, moths experience the same thing. Only it takes them a lot more time to be able to see again. In addition, a moth has to worry about predators eating it during its temporary blindness. You don't. So one last idea as to why moths and flying insects are attracted to artificial light sources is that they can't leave the light. If they do, they'll be blind for too long. And even if a moth manages to break free of the enchantment of your porch light, it's very possible it will come right back again. So why are bugs attracted to light? The truth is, we just don't know yet. What do you think attracts moths to light? And have you ever taken a picture of bugs mobbing your outdoor lighting? Share your ideas and pictures with us on Facebook or Twitter.