How Do Mice Communicate With One Another?

Believe it or not, mice do use vocalizations to convey messages. However, that only scratches the surface of the interchange between mice. 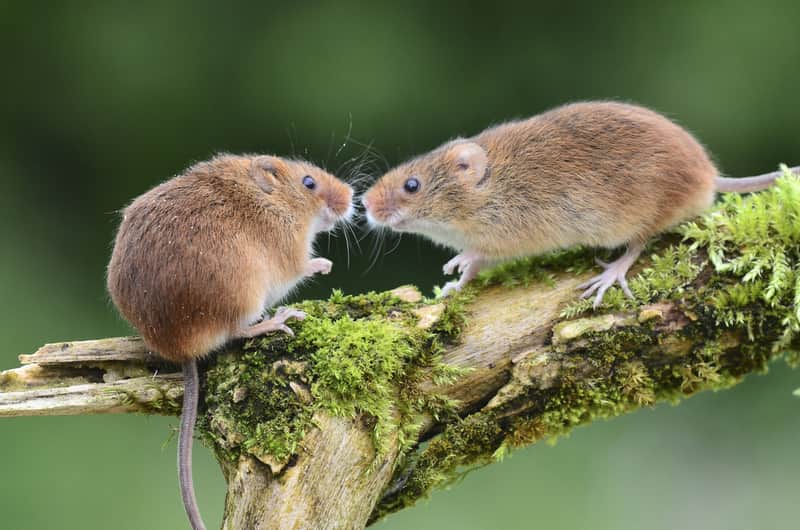 So, how do mice communicate using means other than sound? Dive into the fascinating facts below to learn about mouse noises and what they mean, and then take a look at other methods mice use to “speak” with one another.

What sounds like a mere squeak to most people is actually one of many sounds a mouse might make throughout its day. In fact, some mice noises are so high pitched that humans can’t even hear them. These are called ultrasonic vocalizations (USVs).

In addition to squeaking, mice also chirp and they even sing to each other. That’s right… mice sing! Researchers have discovered that these rodents communicate using USVs emitted in the forms of songs, just like some birds. These songs vary in complexity depending on what they’re meant to communicate and can be used to transmit messages between mother mice and their pups or by males to attract females.

Using Urine to Spread the Message

Like many mammals, mice also transfer information via their urine. Specifically, their urine contains traces of pheromones — chemical substances that are released by one animal and can affect the behavior or physiology of other animals in its species.

So, what exactly are mice saying in these chemical conversations? As it turns out, quite a lot. Scientists have determined that specific pheromones in the urine of female mice might pique the interest of males, making it easier to attract a mate.

And that’s not all. Male mice also use urine to mark their territory in the wild. You might find it interesting to learn that each male mouse has its very own distinctive marker that it uses to stake its claim. A male mouse can also recognize more dominant members of the species via these scented property markers. In these scenarios, the chemically coded message that is being put out there is more or less an invisible “no trespassing” sign.

How do mice communicate non-verbally? With body language! Just as crossing your arms or putting a hand on your hip can let someone know you’re annoyed or impatient, certain mouse postures or behaviors can send messages to other mice.

For example, female mice within a colony may bond with each other and their pups through gentle grooming. At the same time, a male who wants to display dominance may overly groom a more submissive male to let everyone in the mouse house know who’s boss.

Perhaps unsurprisingly, mice also use their tails to communicate with one another, particularly in hostile situations. When a mouse rattles or drums with its tail, there is a good chance that it’s showing a sign of aggression.

Interestingly, the white-footed mouse also drums with its front paws on leaves or hollow reeds. Scientists have yet to decode the message behind this behavior, however.

When you really think about it, the many ways mice communicate with one another are pretty amazing. And understanding these communication methods and other mouse behaviors can help rodent control professionals better learn how to deal with mice.

Want to learn even more about these rodents? Find out the truth behind eight common mouse myths.