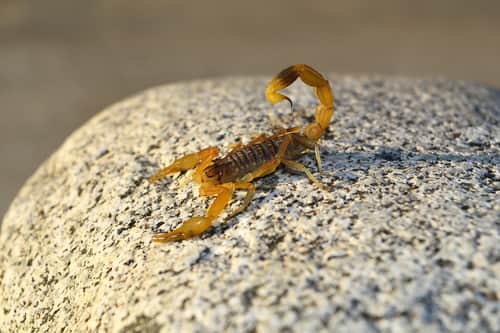 SCORPION BIOLOGY
Scorpions are in Phylum Arthropoda and are related to spiders (Class Arachnida). Scorpions have pincher-like palps that are used for grasping and/or crushing prey, and they have a characteristic stinger that curves over their back. Either the pinchers or venom kills/subdues the prey so the scorpion can eat. Scorpion venom contains toxins that have been studied by researchers for many purposes, including drug development to treat different diseases, as well as insecticides (e.g., shown for lepidopterans) (Valdez-Velasquez et al. 2016).

Most scorpions feed on small arthropods; however, some large scorpion species may be able to kill and eat larger animals (e.g., mice). Scorpions digest their food outside of the body. (Digestive juices are injected into the food and then the scorpion sucks up the liquid food).

Scorpions are considered ovoviviparous, where the young (called scorplings) develop inside eggs held within the mother’s body. Once the young hatch, they crawl onto the mother’s back and remain there until after their first molting period.

SCORPIONS IN ASTRONOMY
The zodiac constellation “Scorpius” is named after the scorpion (https://apod.nasa.gov/apod/ap140504.html). According to mythology, the stinger of a scorpion killed “Orion the Hunter” (represented by another constellation). Because of this, and these two “enemies” are never seen in the sky at the same time.

WHERE ARE SCORPIONS FOUND IN THE UNITED STATES?
Scorpions are generally found in the southern and southwestern regions of the United States. They are nocturnal animals and, during the daytime, may be found under items, such as rocks, wood or in burrows/caves. In some regions, scorpions can be found in forested or grassy areas. Centruroides species can be found in attics of homes in some regions of the United States, and, when summer temperatures become too hot, scorpions may move into home interiors to cool off (increasing the chance of human contact).

CAN SCORPIONS HURT HUMANS OR ANIMALS?
Symptoms that occur after scorpion exposure can range from pain (most common) and numbness to heart attack and death (not as common).

The venom of bark scorpions usually causes pain in mammalian species (such as mice or humans) by triggering a voltage gated sodium channel (membrane protein). However, researchers have shown that the grasshopper mouse can prevent the venom from triggering this channel, hence preventing the pain caused by the scorpion venom (Rowe et al. 2013). This mouse can be stung repeatedly by the bark scorpion and experience minimal effects. In fact, this mouse commonly kills and eats bark scorpions as part of its diet. This study is important because it shows that mammals can develop adaptations to prevent pain, and this information could be used in developing pain relievers and analgesics for humans.

Different scorpion species can cause different types of symptoms. For example, in the United States, Centruroides sculputuratus (the Arizona bark scorpion) is known to inflict pain on its victims by injecting a toxin. Conversely, a sting from Centruroides vittatus (striped bark scorpion) does not usually cause redness or swelling, but people may experience increased sensitivity if frequently stung by this species of scorpion. People that are stung by both fire ants (e.g., Solenopsis invictus) and Centruroides vittatus may experience a higher degree of symptoms due to cross reactions with the two types of venom. It should be noted that there are more deadly species of scorpions outside the United States (e.g., South America).