Scroll down to learn about scorpions, what they look like, their stings, control tips, and more 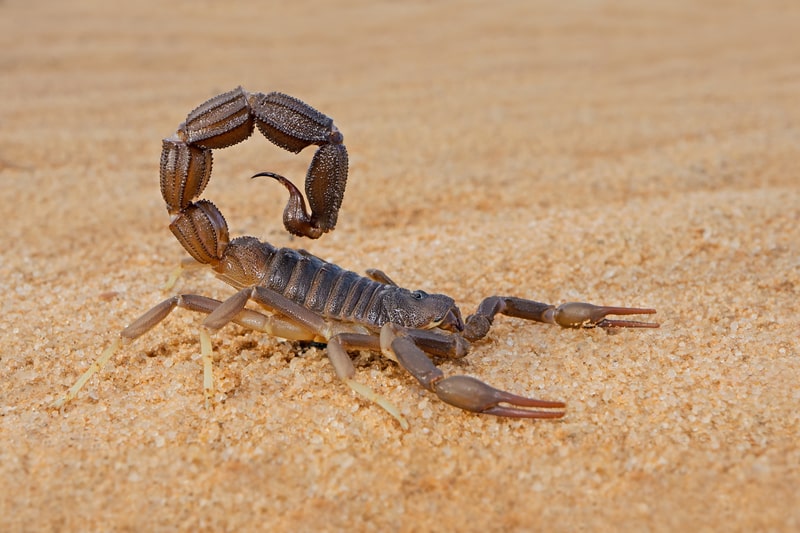 Seeing a scorpion in your home can be alarming. These pests don't just look scary, they can actually be dangerous.

While scorpions prefer living outdoors, they may sometimes seek shelter in your home. When that happens, you need to make sure they leave your property and never come back again.

In this article, we'll cover the following commonly asked questions about scorpions, tips for preventing an infestation, and how to get rid of them.

Contrary to popular belief, scorpions are not insects. Rather, scorpions are predatory arachnids. Their distant relatives are spiders, mites, and ticks. Like all arachnids, they have eight legs. Although they are classified as arachnids, scorpions are also the oldest known arthropods on the planet. Arachnids are classified beneath the category of arthropods, which are a type of invertebrate creature with an exoskeleton and jointed legs. Historical instances of scorpions date back to the time of the ancient Greeks, including these arachnids as the inspiration for the constellation Scorpio.

Scorpions are commonly found in the southern half of the United States, in both the Southeast and Southwest. Outside of the US, they can be found in parts of South America. While these pests prefer dry desert climates, they often hide in cool, dark places during the day – such as beneath sand and rocks – and hunt by night.

While small (adults are about 2 inches long), these pests are notoriously venomous. A sting from a scorpion can have varying results, ranging from a slight allergic reaction to a fatal outcome depending on the species alongside other factors.

One of the reasons why scorpions can be so difficult to deal with is that they are adept at hiding. You may not know that you have unpleasant neighbors until their occasional visit turns into a full-blown infestation.

As arachnids, scorpions have eight legs. These legs are complemented by a pair of pincers and a thin, segmented tail with a stinger on its tip. Depending on the species, scorpions can range between 1 and 5 inches in length, and weigh between 0.02 and 0.2 ounces.

Scorpions look like tiny lobsters or crabs. They are usually yellow or black. However, some species are brown, red, and orange.

Scorpions typically mate in the early fall or spring. Once a female scorpion's eggs have been fertilized with the male scorpion's sperm, the female carries the egg inside her body. The duration of gestation depends on the species. For some, the gestation process can take a few months, while others may take up to a year to develop.

Generally, adult scorpions can live between two to six years, although some species can live for up to 15 years.

Scorpions rest by day and hunt by night. During the day, they find a cool dark place to hide and sleep. These critters are active all year round. The peak of their activity is summertime.

Scorpions are carnivores that usually prey on insects. However, they have also been known to eat snakes, lizards, small rodents, and even other scorpions. These pests can regulate their metabolism masterfully. If there isn't any food around, they can slow their metabolism down to the point of hibernation.

Scorpions are prey for tarantulas, lizards, owls, birds, centipedes, bats, and mice. One such mouse, the grasshopper mouse, is resistant to the venom of the often-lethal bark scorpion. All the more reason why scorpions are a primary component of a grasshopper mouse's diet!

People eat scorpions too. They are popular street food in China, Thailand, and Vietnam. You can also find scorpion feasters in the southwestern states. They say that these critters don't just look like a crab – they taste like it, too!

Where do you find scorpions?

More than 2,500 species of scorpions exist in the world, including throughout South America, Asia, the Middle East, Africa, and the southern portion of the United States across both coasts.

Scorpions usually live outdoors where food is readily available. They are sensitive to light, so they tend to stay hidden in dark crevices during the day. You can find them under rocks, pieces of bark, and bricks. While a few species can survive in extremely cold climates, most prefer temperatures between 68 and 99 degrees Fahrenheit.

When these pests take shelter in your home, you may discover them in garages, basements, bathrooms, dark drawers, garden plants, and even inside your shoes.

What are the different types of scorpions?

Of the thousands of scorpion species across the globe, approximately 50 of them live in the United States.

Some of the most common types of scorpions you can find in the US are:

The majority of scorpions you may encounter in the US do not pose a lethal threat to humans. However, that doesn't make an infestation any less unpleasant or dangerous.

Some scorpions can produce venom that can be lethal to small children and the elderly. With timely medical assistance, it's possible to prevent an unfortunate outcome.

What are scorpion stings?

A scorpion stings by using the stinger, also known as a telson, on the tip of its tail. The stinger has a bulb on the end that terminates in a needle-like protrusion. Venom is created and stored inside the bulb. Each type of scorpion has its own distinct venom and levels of toxicity.

Scorpions respond to a perceived threat by using its stinger, which injects tiny amounts of venom that affect the nervous system.

What happens if a scorpion stings you?

When a scorpion stings you, you could experience a variety of symptoms that range from mild pain to anaphylactic shock. For example, when bitten by a bark scorpion, less than 5% of people experience serious symptoms.

If you are experiencing severe symptoms, you need to seek medical attention immediately.

How common are scorpion stings?

About 1.2 million scorpion stings take place in the world (mostly in Africa and India). Only about 0.27% of them lead to lethal outcomes.

What are the possible complications of a scorpion sting?

Since the venom affects the nervous system, a sting could lead to heart and muscle problems. It could also cause a mild to a severe allergic reaction.

What are the symptoms of a scorpion sting?

The most common symptoms of a scorpion sting are:

Symptoms that indicate a scorpion's venom has spread systemically include anaphylactic shock, difficulty breathing, heightened blood pressure, sweating, and muscle twitching. If you experience these symptoms, seek medical attention immediately. Children often have a stronger reaction to scorpion venom and should see an emergency physician right away if stung.

Can scorpions kill you?

Deaths as a result of a scorpion sting are extremely rare (0.27%). Of the 1.2 million scorpion stings that happen around the globe each year, fatalities usually happen due to a lack of access to immediate medical treatment.

How are scorpion stings treated?

The Mayo Clinic recommends treating a scorpion sting by first cleaning it with soap and water. To relieve the pain, you can apply a cold compress and take over-the-counter pain relievers. If you observe difficulty swallowing, avoid eating or drinking.

While most adults may not require follow up care, children still need to see a medical professional immediately. Similarly, severe reactions to scorpion stings in both adults and children need to be treated in a hospital setting.

When to see a doctor because of a scorpion sting

You need to see a doctor if your symptoms are severe or if mild reactions don't go away for days. Children should see a doctor regardless of severity of symptoms following a scorpion sting. Venom may have a stronger effect on a small child's body compared to that of a healthy adult.

Scorpion venom contains neurotoxins that help paralyze prey. Although they are small, it's their natural ability to produce venom that helps scorpions hunt larger animals.

Scientists believe that in the future, scorpion venom can help treat lupus, rheumatoid arthritis, and even cancer.

What attracts scorpions in a house?

When entering your home, scorpions are looking for water and shelter. They are likely to come if you have sources of standing water in the kitchen, bathroom, attic, or basement. Scorpions may also take shelter in your home if it's too hot outside.

How do I keep scorpions away?

To keep scorpions away from your home, you need to seal cracks and crevices around your doors and windows. You should also look for other entry points outside the house.

Since these pests like to hide in debris, you need to remove woodpiles from the territory, keep the grass short, and trim overhanging trees. Keep all landscaping at least two feet away from your house. Indoors, reduce clutter as these creatures may find hiding spots under clothing piles, inside shoes, or beneath cardboard boxes and paper products.

How to get rid of scorpions?

To get rid of scorpions, there are several DIY methods you can try:

DIY methods may not help you deal with a scorpion infestation. To make sure you remove all scorpions from your property, consider hiring pest control professionals.

Benefits of choosing Terminix® for your scorpion control

Terminix® pest control experts have experience in rooting out scorpions and helping to stamp out infestations. We offer a personalized assessment and recommend a treatment plan to help get rid of your scorpion problem. Terminix pest specialists can also offer you proactive advice to prevent scorpions from coming back.

Once you purchase a Terminix plan, our team of experts offers guaranteed protection for as long as you keep your plan. If your scorpion problem comes back between treatments, we'll be there to help get rid of them at no added cost to you.

Tired of battling scorpions on your own? Contact us for a free inspection today!

Scorpions are one of 13 common pests covered with a Terminix Pest Control Plan1.

What Do Scorpions Eat?

Where Do Scorpions Live?

Scorpion Facts: What You Need to Know

What to Do If You Get Stung by a Scorpion