How Dangerous are Scorpion Stingers?

Scorpions are fascinating creatures due to their exotic look and dangerous potential. Although a scorpion stinger can produce a painful wound, some daring individuals even keep scorpions as pets. 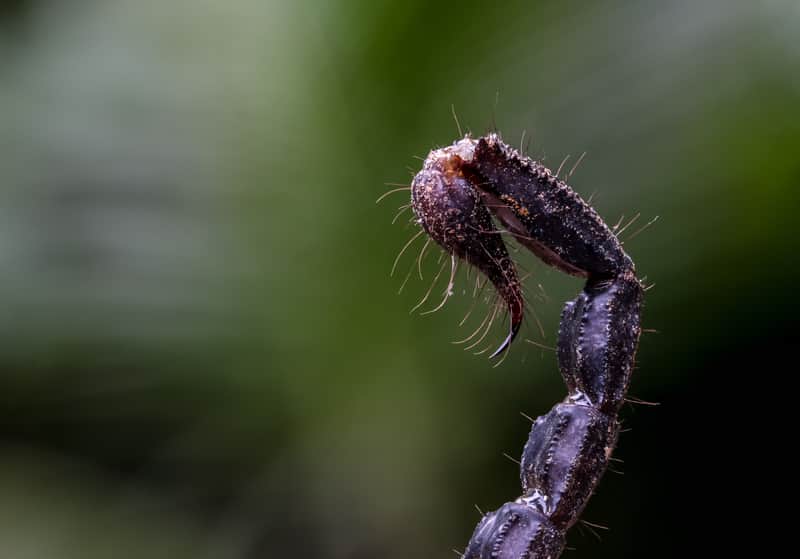 Scorpion anatomy is also intriguing. Their pinching claws and curved tails make them unique among pests commonly found in the house and yard.

Here are some quick facts and tips about scorpions that may help lessen the sting of your next encounter.

The stinger, also known as the telson, lies at the tip of the scorpion's tail. It features a bulb. This is where the scorpion’s venom is both produced and stored. Some say the scorpion stinger resembles a hypodermic needle, and it functions in much the same way when dispensing venom.

Typically when a scorpion hunts and attacks prey, it first attempts to crush its victim by grabbing with its pincers. If needed, the scorpion will also sting its prey, injecting venom that attacks the nerve cells and leads to paralysis and death. Scorpions have small mouths. Following the kill, the scorpion coats its victim with digestive juices that break down the body and make it easier to consume.

It’s not common for a scorpion to sting a human as they are defensive in nature. Whenever you come across a scorpion, understand that it may sense a threat and sting to keep you from crushing or otherwise harming it. Most scorpion stings are no more painful than a bee sting. Like a bee, sometimes a scorpion will lose its stinger in the process. Scorpion anatomy gives these arachnids the ability to release their stingers and parts of their tails in order to quickly flee a perceived threat. While the scorpion heals within days, the tail and its stinger do not usually grow back.

Related > What to do If You Get Stung by a Scorpion

The scorpion's venom is composed of a protein chain called chlorotoxin. Each type of scorpion has its own venom, and all scorpion venoms have different toxicities.

Related > The Difference Between Poisonous and Venomous

For example, the sting of a Deathstalker scorpion, found in North Africa and the Middle East, can be deadly. In the United States, the bark scorpions of Arizona and California are the only species that pose a significant threat to humans.

Scorpion venom is also being studied for its potential benefit to humans, both for developing better insecticides and for creating new drugs to treat diseases.

Most scorpion stings will simply cause pain, swelling, tingling and numbness at the site of the sting. According to the Mayo Clinic, if you have a scorpion encounter that results in a sting:

The Mayo Clinic also says that toxins in scorpion venom can have a stronger effect on children. If you, or you children, begin to experience more severe symptoms after being stung by a scorpion, you should seek professional medical assistance immediately.

Here are some practical tips for helping avoid an unpleasant encounter with this stinging pest:

If these exotic pests become a problem in or around your home, contact the professionals at Terminix®. Our pest control professionals can help rid your home of all these scorpions.