Why Do Scorpions Glow Under Ultraviolet Light

If you ever felt the urge to shine an ultraviolet light on a scorpion, you probably noticed that it glowed. But why We have the answer. 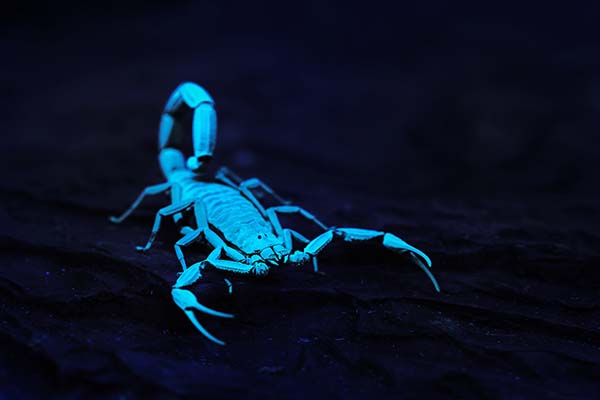 Move over, glow worms. The scorpions are here to light up the night.

Picture a scorpion and you most likely imagine the notoriously poisonous creature scurrying around with its tail held high in the air. What you probably don’t picture is a group of scorpions glowing a bright bluish green under the starlight. That’s right, scorpions are fluorescent.

But what makes them glow? And why on earth would they need to glow in the first place? Let’s take a look.

Do scorpions glow? Yes. That’s an easy question to answer. It’s a bit more difficult to pin down what exactly causes them to glow. In fact, scientists are still working on finding a firm answer to that question.

What scientists do know is that something in the scorpions’ exoskeletons cause them to glow. Scorpions, along with other arthropods and insects, have an outer layer called a “cuticle.” Unlike the cuticles on your fingers, which are made of hard or dead skin, the cuticle on a scorpion is a part of its exoskeleton. This cuticle has a thin section called the “hyaline layer.” The hyaline layer is what reacts to ultraviolet (UV) light, such as black light or moonlight, and causes the scorpion’s body to glow.

The hyaline layer is really strong and truly stands up to the tests of time. In fact, scientists have found that even fossilized scorpions glow under UV light. Additionally, when scientists preserve scorpion specimens in liquid-filled jars, the hyaline layer can make the liquid glow! Crazy, right?

While observing scorpions, scientists have noticed that the creatures don’t glow immediately after molting. Rather, the cuticles have to harden completely before they shine blue-green in the starlight. But scientists still don’t know if the glowing material comes from a chemical reaction in the hardening process, or if the scorpions actually secrete the glowing substance.

Why do scorpions need to glow?

So why would a scorpion need to glow in the first place? As a predatory nocturnal creature, wouldn’t it want to stay hidden? Here again, scientists haven’t yet nailed down an answer to this mystery. But they haven’t given up on trying, either.

One of the most interesting hypotheses is that the scorpion uses its exoskeleton as a giant eye. California State University arachnologist Carl Kloock has suggested that the scorpions use their exoskeletons to detect UV light, so that they know when it’s night and time to eat.

Kloock is still testing his theory but has noticed that scorpions who aren’t really hungry won’t come out to hunt on nights when there’s a lot of moonlight. If they do need to eat, however, they’ll come out and hunt regardless of how bright the night is.

Some of the other hypotheses as to why scorpions are fluorescent under UV light are pretty cool, too. Take a look.

The truth is, we just don’t know why scorpions glow under a black light. What do you think the reason is?


Or learn more about scorpions