Scorpions typically meet with a shoe when found indoors, but these arachnids play a vital role in nature and offer many scientific benefits. They also hold promise for medical breakthroughs, including cancer treatment. Here are some quick facts. 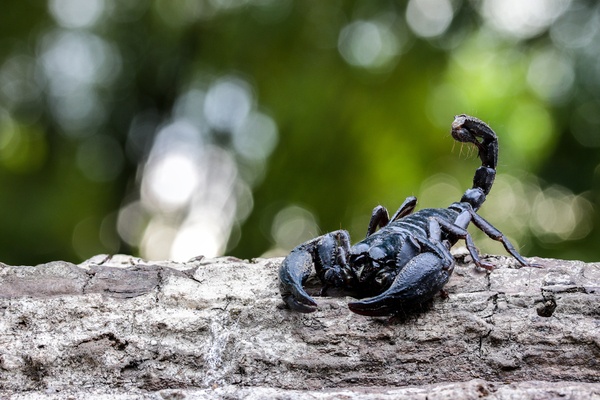 There are more than 1,300 scorpion species in the world. Of these, about 30 species have venom that can be lethal to people. In the United States, there are roughly 90 species, but only the Arizona bark scorpion is considered dangerous.

A quick taxonomic note before we get into the beneficial uses for scorpions in research: The answer to, “Are scorpions insects?” is no. Scorpions are arachnids, which puts them in the same group as spiders and ticks.

The science of scorpion venom

The beneficial use of scorpions for medicinal purposes goes back millennia to China and Greece, where they were used to treat a variety of ailments. The active components of venom — whether it comes from snakes, fish, scorpions or other creatures — are proteins and peptides. The amino acids that form these peptides are responsible for the venom’s ability to seek out and destroy certain cells. It is this highly specific targeting that holds promise for use in medicine.

Modern day research has shown the venom of certain species in the Buthidae family may be useful in developing pain medications, regulating blood pressure and treating certain types of cancer and Parkinson’s disease.

Using scorpion venom as a possible treatment for cancer

Researchers in Mexico and Cuba have discovered that compounds in the venom of certain scorpion species target and destroy cancer cells in laboratory testing. Here is a look at each country’s research.

Mexico: Researchers at the University of Colima (UCOL) studied venom from Centruroides tecomanus, one of the most poisonous scorpions in Mexico. They found more than 100 different proteins and peptides. The scientists isolated specific peptides, which targeted, attached to and damaged cancer cells in laboratory tests. The same researchers are now studying a group of about 10 peptides for their apparent toxicity to lymphoma cells.

Cuba: Scientists and doctors here have used the venom of Rhopalurus junceus, the blue scorpion, for more than 20 years to treat certain cancer types. A serum made from the venom has yielded promising results on solid and organ cancers (those affecting lungs, the pancreas, stomach or brain) but does not work on blood-based cancers. Cuban doctors often prescribe the venom as a complement to conventional treatments like radiation and chemotherapy. Used in tandem, many patients see a reduction in tumor size and may also have fewer side effects and greater energy. Research also appears to show a decrease in pain for almost 100 percent of people using the venom. More research is needed before blue scorpion venom can be used as a cancer treatment in the U.S. However, research does show that the venom formulas used are nontoxic to mammals. Researchers are working to synthesize the compounds in blue scorpion venom, which could lead to a new class of cancer-treating drugs.

In Australia, breakthroughs in research have shown that scorpion venom may hold the key to new types of pain management drugs. Scientists at the University of Queensland, in Brisbane, have spent years mapping and cataloging venom compounds. Data was pulled by collecting almost 1,500 scorpions and studying their venom. Researchers found compounds previously unknown to science, many of which cause numbness in sting victims. These compounds are being used to study both how pain works and ways venom can be adapted to reduce it.

A potential cure for Parkinson’s

Back in Mexico, the UCOL team also found scorpion venom to positively affect animals with Parkinson’s disease. People with Parkinson’s suffer from damaged neurons and a lack of dopamine, which results in a lack of coordination. In laboratory testing, the toxins from scorpion venom attached to dopaminergic neurons and increased the release of dopamine. More research is needed, but the toxins show promise for alleviating symptoms of Parkinson’s.

Two more promising developments are the result of Israeli scorpions. The Israeli gold scorpion’s venom is being studied for its affect on blood pressure. In rats, two compounds of the venom showed opposite effects: One raised blood pressure and one lowered it.

Meanwhile, in Seattle, Washington, Israeli deathstalker scorpion venom is being used to “paint” tumors prior to brain surgery. Researchers use a protein pulled from the scorpion’s venom, coupled with a fluorescent molecule, to light up cancer cells. The protein targets the cells, and the molecule illuminates them like a flashlight.

This enables doctors to better target the cancerous cells during brain surgery. Human trials began in 2015, and doctors are hopeful that with more research, the venom compound can help remove more of the cancer than methods available now.

While scorpions may hold the key to curing cancer, that doesn’t mean you want them inside your home. If you are seeing these arachnids, go online to find out how Terminix® can help with scorpion removal.