Wolf spiders are one of the most common species of spiders in North America. Contrary to the name, they are solitary creatures and search for prey alone. 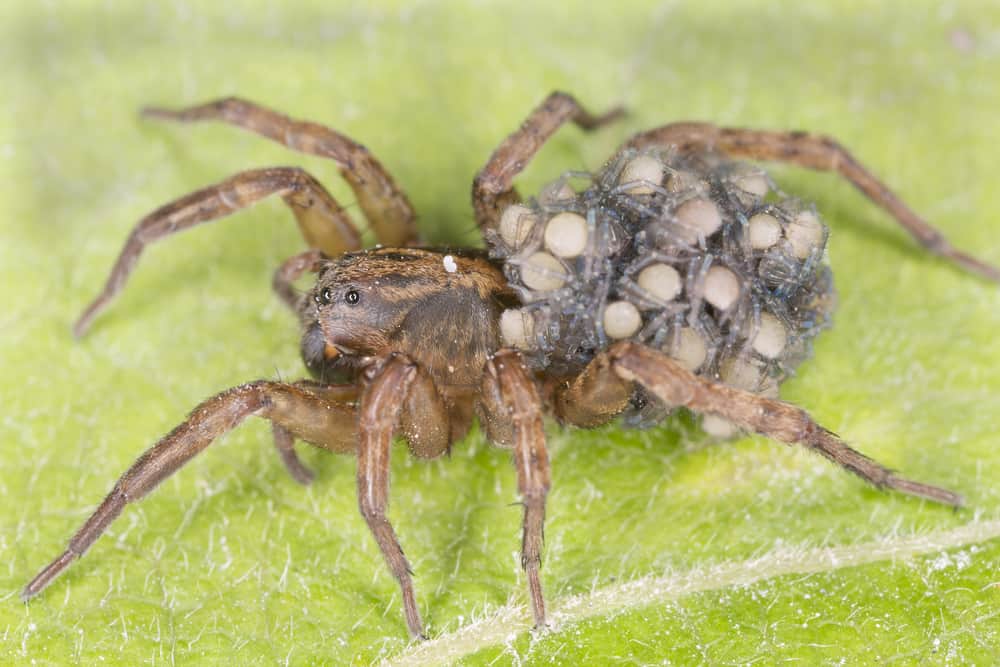 What separates them from other spider species is the way in which the female spider carries her eggs — in a sac attached to her spinnerets. The spiderlings climb onto the mother’s abdomen upon hatching and live there until they are large enough to hunt on their own. The mother may be carrying hundreds of offspring at a time.

While you might be tempted to squish one of these spiders with your broom, think again. If your target happens to be an egg-carrying female, it might release hundreds of spiderlings onto your floor. If you encounter a wolf spider in your home, trap it using glue boards and get rid of it. Glue boards are available at farm supply stores. Alternatively, trap it using a glass and paper and release it outside.

If the infestation is serious, contact a pest control professional for the best possible treatment.

It’s crucial to identify wolf spiders correctly before you can formulate a response. Using a magnifying device can help you take a closer look once you've captured the spider. They have the following characteristics:

At times, what you identify as a wolf spider might actually be a more dangerous species, such as the black widow or the brown recluse. While it can be difficult to differentiate one from the other, wolf spiders are typically more free-roaming. Black widows like to stay close to their webs. Brown recluses inhabit attics, wall voids and other spaces seldom visited by humans.  If you’re in doubt, contact a pest control professional to identify the spider and take appropriate measures.

Prevention Is the Best Defense

Wolf spiders live by the thousands in leaf litter and grassy areas. According to the Penn State College of Agricultural Sciences, the most common shelters include retreats (holes or tunnels) in the soil. Other sanctuaries include protected areas, such as under boards, stones and firewood. Occasionally, they venture indoors.

The University of Kentucky recommends the following measures for controlling spiders in your home:

Implementing these measures in your home can help lessen the chance that you'll have to face your arachnophobia. To learn more about wolf spiders and how to keep spiders away, visit Terminix.com.