How Are Insects Used In Forensic Entomology?

Entomological information related to the timing and types of arthropods that visit a corpse are sometimes used in criminal or other legal investigations. 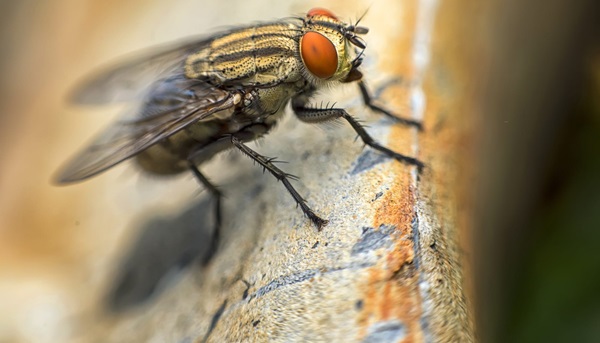 Information about insect succession can help investigators determine the time of death (post-mortem interval or "PMI") and/or if the body had been moved from another location prior to being discovered by law enforcement personnel. Bodies go through five general stages of decomposition and this information can aid investigators in estimating the PMI:

The following factors may influence decomposition rate and estimation of the PMI:

A forensic entomologist must consider all potential contributing factors when making a determination about the PMI.

The Connection between Flies and Decomposition

In general, flies (blow flies, flesh flies) are the first to visit a corpse to lay their eggs. Once eggs hatch, the fly larvae begin feeding on tissues. Blow flies may not lay eggs on a corpse if it is covered in soil; however, this depends on the blow fly species, as some flies will crawl through soil to lay eggs. The coffin fly (Conicera tibialis) is known to burrow into the soil to lay eggs on a corpse (can burrow 30–100 cm deep). Large numbers of coffin flies have been detected at grave sites and can be an indication of human remains. The blow flies Calliphora vomitaria and C. vicina have respectively been shown to colonize bait (pig liver) buried in soil no more than 5 cm and 10 cm deep. In these cases, eggs were laid on the surface of the soil and larvae burrowed through the soil to reach the bait.

Larvae of the oldest age can be collected from a corpse and used in criminal investigations. It is important to note that, just before pupation (the period before flies emerge as adults), fly larvae move away from the corpse (2–26 m away, depending on species and time of year) in order to burrow into the ground for pupation. Forensic entomologists must search the corpse, as well as the surrounding area of the crime scene, during their investigation. Knowledge of specific fly development times in different environments can help investigators determine the PMI. Fly larvae can be identified to species and/or fly pupae can be reared to adult and identified.

Other Organisms Used in Forensic Entomology

Beetles (e.g., carrion beetles, ham beetles, rove beetles) and bacteria are also commonly associated with decomposition and can be used in estimation of the PMI.

Some insects can interfere with estimation of the PMI. For instance, ants present at the corpse may eat fly eggs and larvae, hence slowing the decomposition rate of the corpse.

Pig carcasses are often used in forensic entomology research as an alternative to human corpses. Pigs have skin that is similar to humans, hence pigs show similar decomposition rates to humans.

What are some examples of other types of cases in which forensic entomology is used?

Food production facilities can become infested with pests if Integrated Pest Management procedures are not followed. In some cases, food products can become contaminated with insect debris (e.g., fly maggots in meat served in restaurants, insects in prepared salad bags sold in grocery stores, insect debris in cereal boxes). These issues can be a public health threat as well as offensive to consumers, hence litigation is often sought in these cases and forensic entomologists may be consulted.

In some cases of neglect in vulnerable populations (e.g., elderly in nursing home, child, mistreated pet), myiasis (tissue invasion) by flies may be an indication of improper handling of sores and other issues. Mortuaries may be involved in litigation if corpses become infested with maggots due to improper embalming.

Forensic entomologists may be called upon to participate in investigations when insects may be “witnesses.” Hence, proper identification and knowledge of pest biology is important in order to provide informed and objective observations in these cases.