Scroll down to learn about beetles, what they look like, where they come from, control tips, and more

The largest of all orders of insects is Coleoptera – which includes the insect colloquially known as the beetle. This order includes more than 300,000 distinct species. Although most species of beetles are beneficial in various ways, some can be a nuisance when they get in your home. A few species of beetles can even cause damage to your home or belongings and action may be needed to protect what's yours.

In this article, we'll share with you facts and information about beetles, different types of beetles, as well as warning signs that these insects may have made their way into your home. Here are some of the common questions we get asked about beetles that we'll answer for you here:

The order name Coleoptera means "folded wing" and it's a good description of these insects. All beetles have a hardened outer shell covering their wings, known as an “elytra." Identifying beetles can be tricky, since they come in an array of colors, shapes, and sizes. However, all beetles have six legs, a head, a thorax, and abdomen. Their elytra are located on their thorax. Beetles also have antennae and a mandible that they use for crushing food and fending off predators. 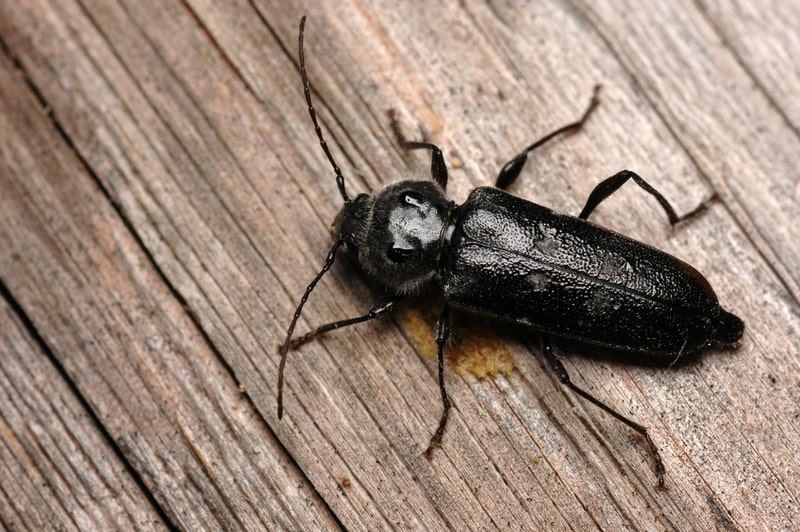 What are the differences between bugs and beetles?

Beetles have an outer pair of wings that harden to form a protective shield over their delicate flight wings. In addition, beetles have mouthparts that are designed to chew. Bugs, by contrast, have mouthparts meant for piercing and sucking.

Many people commonly use the terms “insects" and “bugs" interchangeably, although the terms aren't necessarily the same thing. Similarly, some people may refer to “beetles" as “bugs," when they are actually a type of insect. It all comes down to the fact that beetles have a different type of body than a bug.

Like other insects, the life cycle of a beetle plays out in stages. This process, called metamorphosis, completely transforms the beetle egg to a fully-formed adult beetle. There are four stages of a beetle's development. 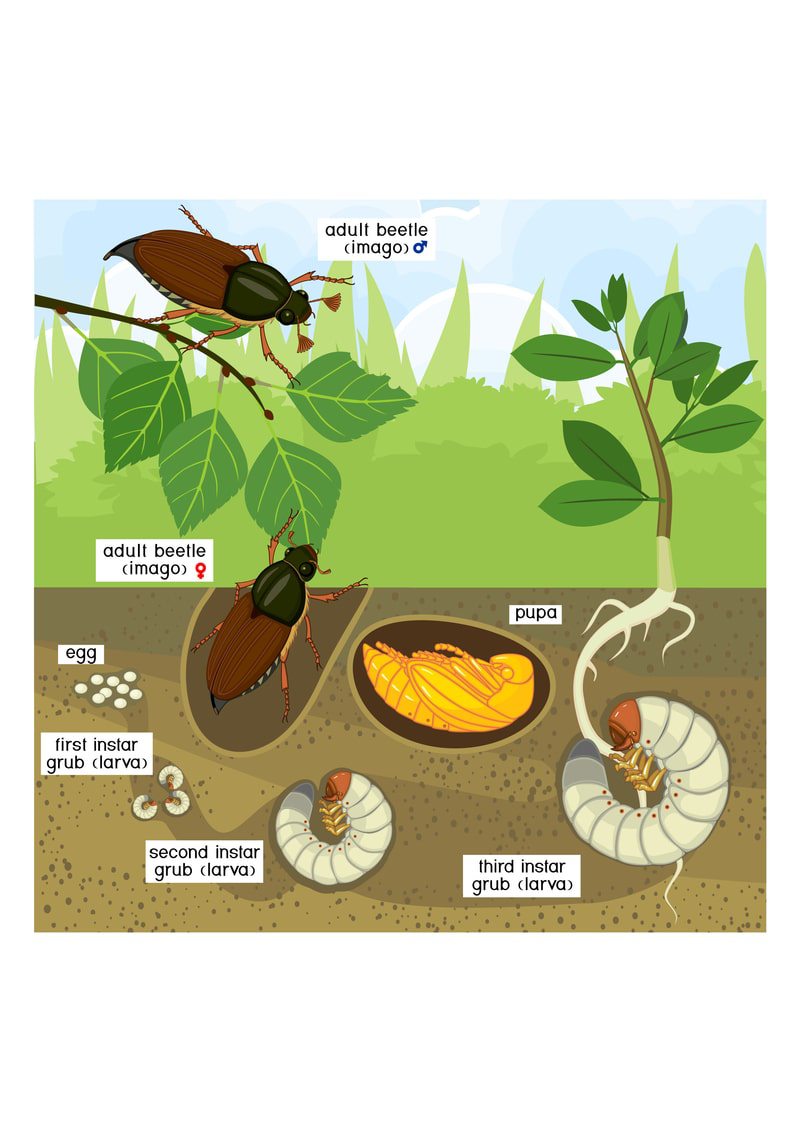 Many adult beetles lay their eggs in rotting vegetation, decomposing wood, or animal feces, where they leave to develop into the next stage. For many species of beetles, this is where their life begins as small white or yellow eggs. 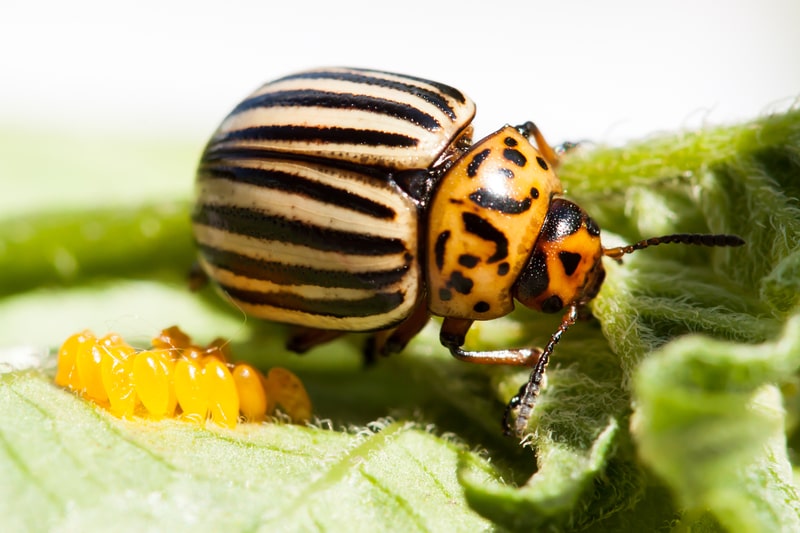 After an incubation period of between 7 to 10 days, beetle eggs hatch and a grub-like larva emerges. Beetles exist in this larval stage for roughly three months. The larvae may molt, or shed its skin, up to as many as ten times as it grows and prepares for its most dramatic transformation yet. 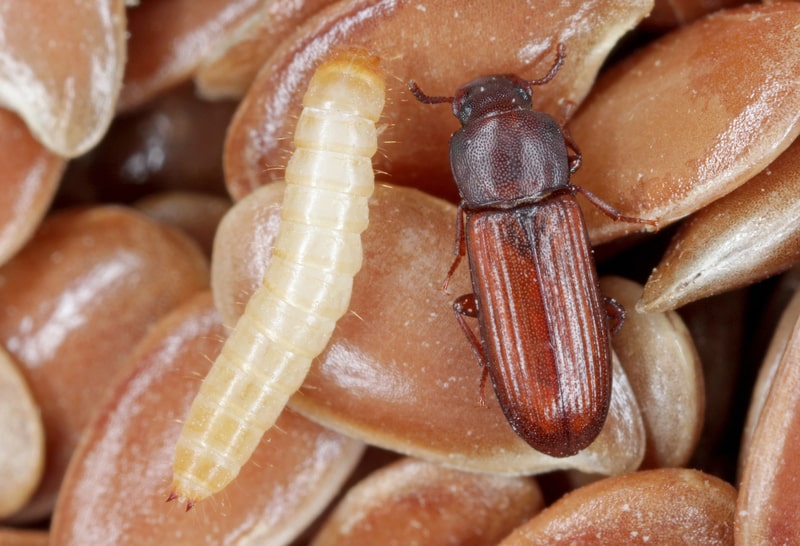 When the larva enters the pupal stage, it spins a cocoon around itself. This protective case will be home to the beetle as it transitions into an adult. This stage can last for months, or even years, depending upon the species of beetle. 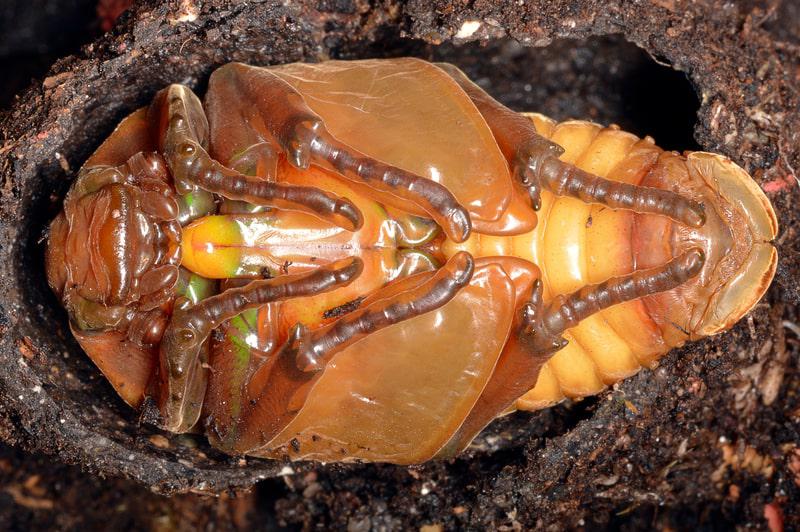 At the end of the pupal stage, a full-grown, adult beetle emerges and is ready to mate, reproduce, and begin the lifecycle of the next generation of beetles. 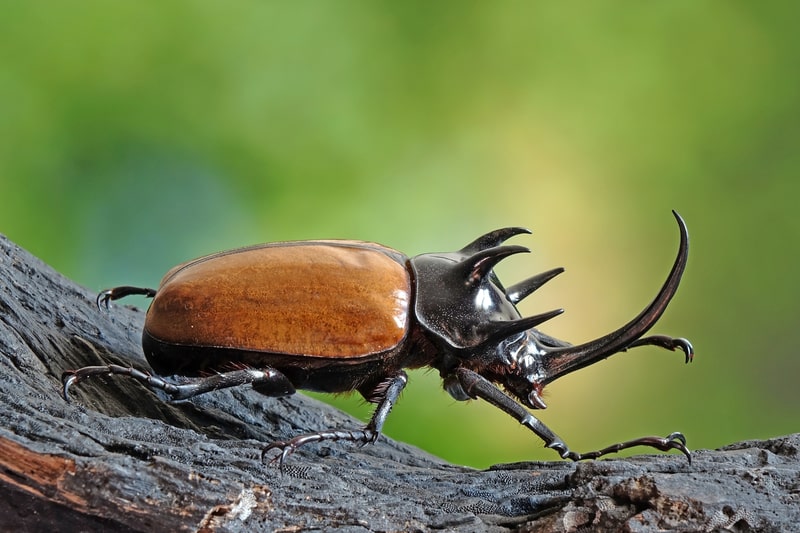 For instance, the American spider beetle, with its gold to reddish-brown coloring, tends to stay outdoors. Yet, when they make their way into your home, they will feed on not just dry goods like flour, but will even eat leather. Like most beetle species, it is the larval stage that does most, if not all, of the feeding and causes the resulting damage to materials in homes. Adult beetles usually lay eggs near or in a suitable food source that their larvae can use for survival.

Another more common beetle found throughout the U.S. is the carpet beetle, which poses no danger to humans but can be destructive when it comes to clothing and anything containing natural fibers like wool, cashmere, and cotton. Carpet beetle larvae are voracious eaters and will wreak havoc on your belongings in their need to feed.

Another type of beetle that often makes its way indoors is the larder beetle, which looks for a food source where they can lay their eggs. Larder beetles will seek out dead insects or animals to feed on, as well as fresh food such as meats, cheese, and other sources of protein. These hearty eaters are also used by museum curators to clean the bones of animal skeletons, giving them free rein to chow down on any remaining flesh.

Other common beetles include:

For the most part, beetles prefer to live outdoors. Beetle habitats include forest floors, deserts, and even fresh water. Beetle behaviors and individual characteristics are as diverse as their chosen homes.

While most species of beetles provide positive benefits to the environment – feeding on dead animals and plant life, as well as reducing populations of nature-destroying pests like caterpillars and aphids – there are some species that are destructive in nature. Bark beetles and Emerald Ash borers are responsible for killing thousands of trees each year, while boll weevils have a long history of decimating cotton crops.

What do beetles eat?

As with their habitats and behaviors, the beetle diets range widely from species to species. Some beetles consume vegetation, wood, and other fibers. Others prefer a meatier diet and some even hunt down live prey. Most of the feeding comes during the larval stage of the beetle's life.

Like all insects, beetles are on the menu for all kinds of critters. Birds, reptiles, amphibians, and even mammals will munch on these crunchy, protein packed insects. In fact, in some parts of the world, people eat beetles, usually as larvae.

Do beetles have wings and fly?

Yes, many, but not all species of beetles fly. Most have at least a small version of wings even if they do not fly. Like most insects, beetles have two distinct sets of wings. The outer wing hardens, forming a shell that protects the other set of flying wings beneath. Only adult beetles are able to fly (for all species that do fly).

Some species of beetle are decomposers – to put it more simply, they help break down dead plant life, animal waste, or animal carcasses. As noted before, different species of beetles will have different food and behaviors. Some will feed on decomposing leaves and other plant matter on the forest floor. Other beetles feed on decaying wood, and along with fungi, help to decompose these materials, making way for new plant life to emerge.

In fact, forensic scientists actually depend on some beetle species (and fly species) as a primary method to help them determine time of death based on the stage of growth of beetle eggs, larvae, pupae or adults that are almost always present in dead bodies that have been exposed to the elements.

Yes, some species of beetles do hibernate over winter. June bugs dig a comfy underground lair, ladybugs shelter in loose tree bark and other cavities and emerge again in spring.

While you're more likely to see beetles in the warmer months, they can also remain active during the winter. Beetles such as carpet beetles, Asian lady beetles, Elm leaf beetles, click beetles and rice weevils may seek food and shelter within your home during winter months.

Are beetles harmful to humans or pets?

For the most part, beetles are not particularly dangerous. They can, however, cross-contaminate food and surfaces, leading to illness in people. Blister beetles may pose a threat to people as they secrete an agent called cantharidin that can causes painful blisters, giving this beetle its name.

Most beetles are harmless to pets, even if they're eaten. However, there are some beetles such as Asian lady beetles, blister beetles, and bombardier beetles that secrete toxic chemicals when they are ingested by your pet, causing a reaction similar to a chemical burn.

Do beetles sting or bite?

While beetles do have chewing mouth parts that are capable of biting people, they rarely do. However, if you irritate a blister beetle, stag beetle, or longhorned beetle, it may bite you. Although blister beetles can bite, they can cause far more harm due to a toxin they secrete that may causes blisters and irritation in humans and animals. However, most beetles are not poisonous or venomous.

What problems do beetles cause in homes?

The damage a beetle infestation can cause depends upon the type of beetle and the extent of the infestation. Wood-eating beetles can wreak havoc on your home's structure, while carpet beetles can damage clothing and other natural fibers, and other beetles will strip your trees of vegetation.

What attracts beetles in your house?

Beetles are attracted to human dwellings for shelter, food, and water. Outdoor lights, landscaping, and trash attract beetles to your yard and garden. Food that's left out, moist conditions, and easy access (such as cracks in the foundation, as well as open windows and doors) can lure them into your home.

How can I prevent beetles from getting into my home?

Some types of beetles are also introduced into the home in food products, furnishings or other items that are inadvertently brought in by homeowners.

The best way to prevent beetles from entering your home is to seal up any holes and cracks. Make sure your windows and doors close properly, install insulation, and maintain your home. Move trash bins away from your home, clean up yard waste, and keep your food prep areas clean to help keep beetles at bay.

What are signs of a beetle infestation?

Some beetles, such as carpet beetles, are more commonly found indoors. Signs that you may have an infestation of carpet beetles include finding holes chewed in upholstery or clothing made from natural fibers (cotton, wool and leather to name a few). You may start to find their eggs or larvae on furniture, in carpets, or even on clothes. These beetles are attracted to light and can sometimes deposit larvae near windows or another light source.

Outside the home, many beetles (such as Asian lady beetles and June beetles) attack yards in swarms, making it easy to identify an infestation. But remember that some beetles may evade your watchful gaze. If you spot live beetles or cocoons, it's likely you have a beetle infestation, especially if it's during the warmer months. You may also see damage to food products, such as larvae in food products or small holes in food packaging where adult beetles have exited

How do I get rid of beetles in my home?

While you may not be able to eliminate every beetle from your home, there are some steps you can take to get rid of them. First of all, keep up with your housekeeping. Regularly vacuum, sweep, and clean out your pantry and kitchen area. Keep trash cans sealed, reduce the number of outdoor lights you use, and eliminate yard waste and debris where beetles can hide. Also be sure to inspect kitchen pantry areas periodically for evidence of beetles and dispose of any infested products found.

How Terminix® helps you with beetle control

If you're being bugged by beetles, contact Terminix® today to schedule a free pest inspection. Our highly-trained, licensed exterminators have an intimate understanding of the local pests that may bother homeowners like yourself. We also know how to effectively treat beetle infestations so you can enjoy your home and yard again.

How Does Insulation Help Prevent Against Beetles?