The Science Behind Centipede and Millipede Leg Movement

House centipedes (Scutigera coleoptrata) are commonly found in residential settings. The house centipede is a predator of insects and spiders, hence may be considered beneficial, but most people do not want this uninvited guest in their home. Neither centipedes nor millipedes are classified as insects, but are actually arthropods. 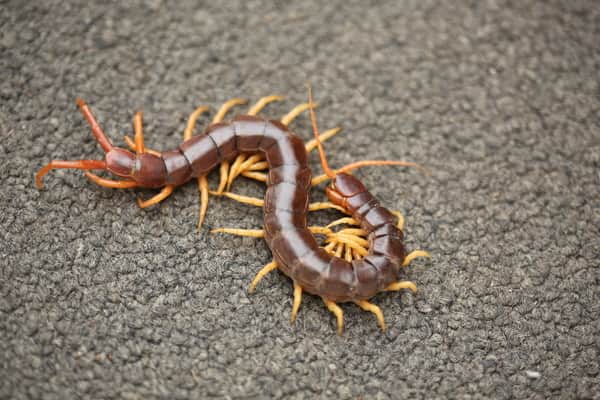 How many legs do centipedes have?

Though their name literally means "one hundred legs," centipedes can have anywhere from 10 to roughly 300 legs. Oddly enough, you’ll never find one with exactly 100 legs because they only have an odd number of pairs. And instead of being born with all of their legs, some species grow more legs each time they molt. As adults, centipedes have at least 15 pairs of legs.

How many legs do millipedes have?

Millipedes (Subphylum Myriapoda; Class Diplopoda) have two pairs of legs on most body segments. The millipede Illacme plenipes (found in California) has the most legs of any animal on Earth (750 legs). However, most millipede species have about 300 legs.

How do centipedes and millipedes coordinate their leg movements?

Centipedes are fast moving predators of insects and spiders, while millipedes are slow moving and primarily feed on decayed vegetation (although a small percentage of millipedes are predatory).

Having so many legs can be advantageous because of the ability to prevent falling, as well as having other legs take over when some legs may malfunction. In order to study locomotion and maneuverability by using multiple legs simultaneously, scientists created a centipede-like robot (with 12 legs) (Aoi et al. 2016). The same study reported the important relationship between stability and maneuverability, especially during the turning experiments carried out by their robot.

Another study examining centipedes showed that the points at which the legs contact the ground and sensations from surrounding legs impact their overall leg movements (Yasui et al. 2017). Centipedes can navigate different terrain with ease by coordinating their leg movements, likely through a decentralized method of sensory inputs. Scientists think this decentralization may be a way that moving robots can “think” in the future.

Are centipedes and millipedes considered pests of humans?

Centipedes and millipedes should not be handled by people, as they have defensive behaviors that can cause irritation and/or harm.

Large centipedes can pinch and potentially inject venom into victims; however, the mouthparts of small centipedes are generally not capable of hurting humans. The legs of some centipede species contain small claws which can scratch and provide an entry point for venom. While this venom may be generally irritating to some people, others may experience allergic reactions that would require a visit to a physician for treatment.

Millipedes do not sting or bite, hence you may see them coiled up in a ball in defense. Millipedes can emit chemical substances from their bodies as a defensive mechanism against potential predators and these liquids may irritate skin or eyes.