How to Identify Types of Scale Insects

Scale insects are an interesting species. In fact, to the untrained eye, the first time scale insects are spotted they might not even appear to be insects because of their flat appearance, they can be mistaken for part of a plant or tree. Keep reading to learn more about scale insects’ distinguishing features and how to identify different types of scale insects. 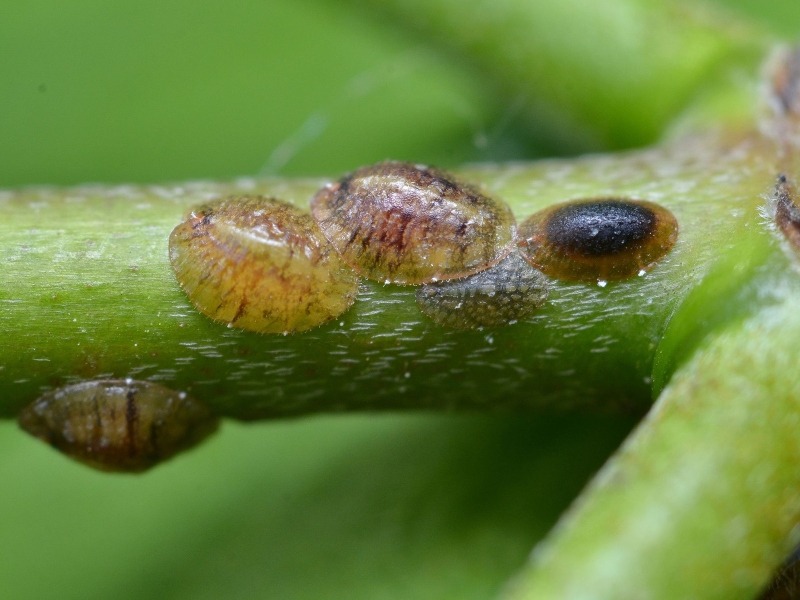 What are scale insects?

Scale insects are a fairly common garden and indoor plant pest. Like other plant pests, they feed on the sap and nutrients running through the plant. This can cause both aesthetic damage, usually in the form of discoloration, and depending on the extent, physical damage. When it comes to scale insects, it’s unlikely that they’ll do immense damage (though that doesn’t mean you want them on your plants either way).

Scale insects feed mostly on trees, shrubs, and perennial plants. Some species prefer fruit-bearing trees like orange, olive, or lemon, while others attack a wide variety of bromeliads, flowering plants, or even fruit and vegetable plants such as brassicas or beans. Unlike some other plant pests that mostly feed on leaves, scale insects may be found on leaves, bark, and other plant parts such as fruits. Scale insects feed by inserting small, straw-like mouthparts into plants to suck out nutrients. Because scales feed on dark parts of the plant like the bark, it’s easy for certain species and types of scale insects to blend in.

Armored scales are quite small, usually only about one-sixteenth of an inch to one-eighth of an inch in length. They have an oval, slightly elongated shape. They get their common name from the waxy, protective scale covering that covers their bodies while they feed. These scales are not actually a part of the insect, but instead are external, protective coverings. The scales often have a slight protuberance. Armored scales will often blend in with the bark of their host plants, meaning they might not be noticed until damage becomes more apparent. Though there are some, like the pine needle scale, that you can see fairly easily. They have a white encasing, which stands out amongst the green pine needles that they feed on. Armored scales feed on individual plant cells, and they do not produce honeydew.

Many species of armored scales have more than one generation a year. In order for this to happen, they must overwinter. This usually occurs in either the nymph or female adult scale stages. Only adult males and scale crawlers have obvious appendages that let them move around. Otherwise, they’ll remain in the same spot and continue to feed for the entirety of their lives.

Is it scale or something else?

There are some other plant pests that one might mistake for scale, for a variety of reasons. These include:
Next > Mayfly Life: Where They Live, and For How Long