Are Millipedes and Centipedes Poisonous

What are the differences between a millipede and centipede? Are millipedes poisonous while centipedes are not? Find out with Terminix pest control experts. 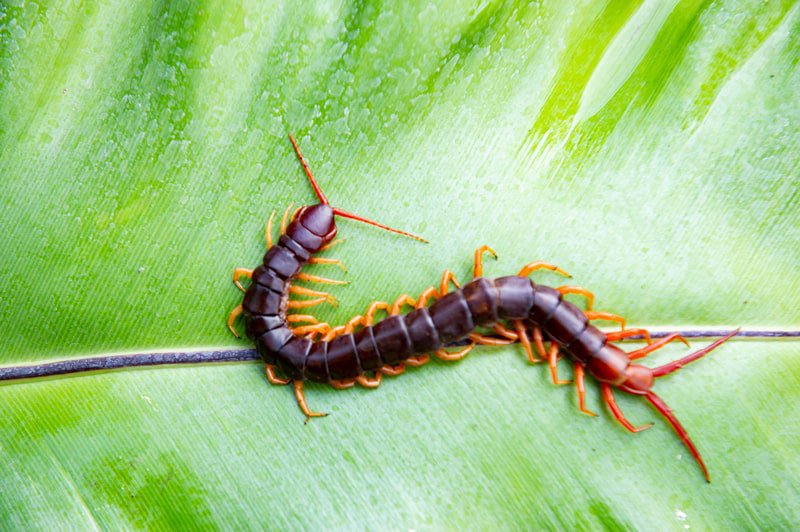 What's the Difference Between a Millipede and Centipede?

Is a millipede venomous? What about a centipede? Do both of these insects have 100 legs? Find out these answers and more.

Centipedes and millipedes are both arthropods known for having long bodies with lots and lots of legs. But that’s about as far as their similarities go.

If you’re thinking, “But wait! They’re both venomous!” you’ll be surprised to learn that only one of these leggy creatures is toxic. Below you’ll discover which arthropod is venomous. You’ll also find that there are many differences between centipedes and millipedes.

Centipedes are members of the chilopoda class of arthropods. One difference between a centipede and a millipede is that a centipede only has one set of legs (or two legs total) per body segment.

The prefix centi- means 100, so many people believe that all centipedes have 100 legs. They can have anywhere from 30 to 354 legs. Interestingly, no centipede has an even number of leg sets. That means that there aren’t any centipedes that naturally have 100 legs.

When it comes to length, centipedes can grow to be anywhere from one to 12 inches depending on the species. All centipedes have long antennae. Centipedes are carnivorous predators, so they also have large jaws that they use to kill or paralyze their prey.

Many centipedes are venomous, though not all are. The specialized front limbs — or maxillipeds — of the centipede contain venom glands that help them hunt. They first use these powerful front legs to catch their prey, and then kill the prey by injecting it with venom.

It’s true that centipedes can bite people. These bites can cause an allergic reaction similar to a bee sting. The larger the centipede, however, the more painful the bite can be. And small children or people who are allergic to other insects may have more severe reactions.

There are more species of this arthropod than there are legs on the leggiest of centipedes. Meet three of the many.

House centipedes: You may be relieved to know that house centipedes are not harmful. They can help out around the house, as they like to eat spiders and insects. They’re not exactly easy on the eyes, though, and are most easily recognized by their long legs.

Millipedes are arthropods that are members of the Diplopoda class. They’re characterized by having two sets of legs (or four legs total) per body segment. Remember, the centipede only has one pair of legs per body segment. This is one significant difference between a centipede and a millipede.

Millipedes also don’t have powerful venomous jaws, and their antennae are shorter. And unlike the centipede, millipedes are scavengers that like to feed on decaying organic matter, like leaves and compost.

You may have been taught that millipedes have one thousand legs. It would make sense to think so, as the prefix milli- does mean one thousand. But different types of millipedes have a different number of legs. Illacme plenipes, for example, currently holds the title for the millipede with the most legs. Surprisingly, it only has 750, which means it’s about 250 limbs shy of one thousand.

Is a millipede venomous?

Due to their dashing good looks and numerous legs, millipedes are commonly confused with centipedes. Unfortunately, this has given the poor millipede a bad reputation. Millipedes are not venomous.

A millipede won’t bite or sting you as a defense mechanism. In fact, it’s much more likely to curl up into a tight little ball.

That doesn’t mean you should pick up millipedes with your bare hands, however. When a millipede thinks it’s being attacked, its defensive glands emit a stinky liquid. This liquid can irritate the eyes and skin. It can also stain your skin and make it smell. Additionally, some people are allergic to a millipede’s defensive spray.

So is a millipede poisonous? No. But it’s probably best to let them be. If you must handle millipedes, be sure to wash your hands afterward.

There are many millipede types, and they range in size, shape and color. Let’s take a look at a few of the most interesting millipedes in the world.

Now you know some of the differences between millipedes and centipedes. Ready for more bug facts? We’ve got you covered from beekeeping to caterpillars.

Need help with centipedes or millipedes?