Though not harmful, millipedes can be a nuisance. Learn all of the milipede facts you need to know that will help you to better understand these creatures. 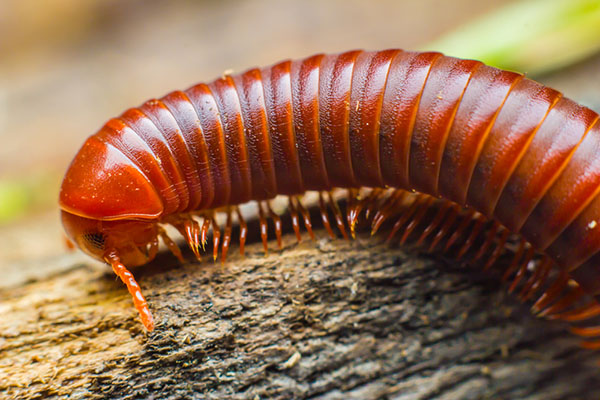 Millipedes are those long black bugs with what seems like a million tiny legs that you see crawling in your bedroom windows and that curl into a tight ball when threatened. They won't bite you, but they can emit a smelly fluid that might irritate your eyes or skin. Though they're not harmful to your family, they can be a nuisance in large numbers. Here are more millipede facts to help you better understand these many-legged creatures.

Millipedes are arthropods. While they may resemble thousand-legged worms, millipedes are, in fact, not worms but arthropods, meaning they are invertebrates with an exoskeleton, a segmented body and jointed appendages.1

Millipedes are some of the oldest creatures to walk on land. Fossilized evidence show that a millipede-like creature was one of the first and largest invertebrates to walk on land at six feet long and one and a half feet wide.2 One particular fossil has been traced back 420 million years and was named Pnueumodesmus newmani for the person who discovered it.

Millipedes are nature's little recyclers. They are detritivores, meaning they feed on dead plants and animals. The millipedes' snacking recycles nutrients back into the soil at a much faster rate than plants and animals decomposing naturally. Ranging in size from one-quarter to even 15 inches long, millipedes play a large role in breaking down nature's waste.

Millipedes love damp spaces because they require moisture to live. That's why you'll mostly find them around your crawl spaces, damp basements, cellars and sliding glass doors/windows-if you find them inside your home at all. Millipedes much prefer the outdoors, making their homes under mulch, compost, stones and leaf piles.3

Although a millipede's natural home is not inside your home, you may find them in the spring and fall after long periods of rain or drought. But they won't be there for long. Because millipedes require such high moisture levels, they usually die within one to two days inside a home. So if you have an infestation, simply wait out the "invaders" and vacuum up the remains.

Millipedes do not have a thousand legs. A hatchling is born with only three pairs of legs and can grow up to 200 as an adult. They have two pairs of legs per body segment. This is the main difference between millipedes and centipedes, since centipedes only have one pair of legs per segment.

Millipedes and centipedes, while related, are very different. Millipedes' bodies are rounder, while centipedes have a flatter appearance and elongated antennae. Centipedes are also much quicker than millipedes. The most important difference is that centipedes are carnivores and some species can bite. A centipede's bite is quite painful and its venom can cause health problems. If you suspect you or a loved one may have been bitten by a centipede, be sure to consult a physician.4

When you understand the facts about millipedes, you can better prevent them from entering your home or from panicking should you find that one has made its way inside.

Need help with centipedes or millipedes?