More than 200 species of wolf spiders are native to North America, so it's likely that you've encountered this eight-legged creature at one time or another. 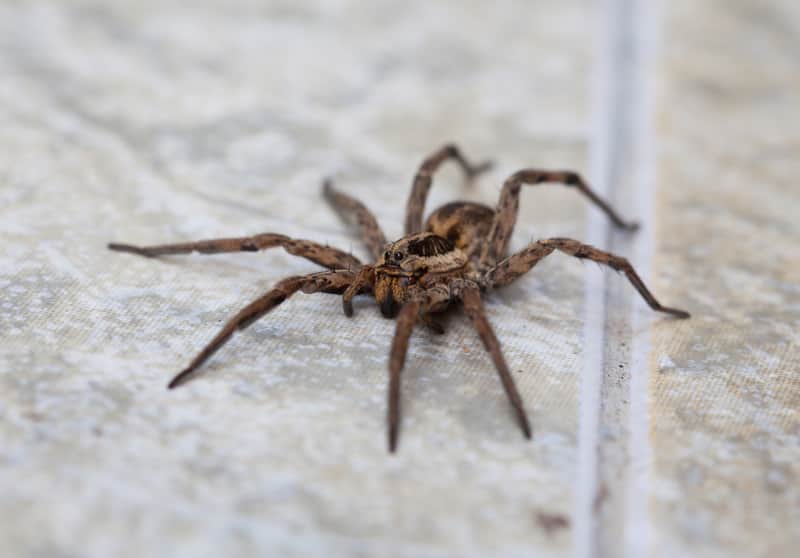 These spiders have earned their name due to their tendency to stalk their prey before capturing them. True “lone wolves” among spiders, these solitary arachnids live and hunt on their own. In fact, they do not socialize with other wolf spiders unless it's mating season (fall). Yet, while wolf spiders may be an intimidating threat to other insects, are they dangerous to people?

Wolf spiders are not poisonous. But they are venomous. There is a difference. However, that does not necessarily mean they are of much danger to humans. Wolf spiders produce a venom designed to paralyze their prey (normally a small crawling insect), but, in the case of the wolf spider, this venom is not especially toxic to human beings. Generally speaking, a wolf spider bite is no more dangerous or painful than a bee sting. Typical reactions to a wolf spider bite include initial pain and redness, but both symptoms gradually subside in most people. In fact, medical histories hold no records of serious consequences resulting from a wolf spider bite. On rare occasions, however, people have been known to have an allergic reaction.

Wolf spiders bite, but they don't often bite humans. When threatened, these spiders prefer to retreat. Wolf spider bites are most likely to occur if you are directly handling one or should one become trapped next to your skin.

How Big Are Wolf Spiders?

Wolf spiders come in many sizes and can grow to be quite large. They range from a quarter of an inch to about one and a half inches in length.

Where Are Wolf Spiders Found?

Wolf spiders can be found worldwide. They commonly live in grasslands and meadows, but they may also live in mountains, rainforests, wetlands and deserts. Some wolf spiders hide in vegetation or fallen leaves while others burrow in soil, or build tunnels under – or between - boards, stones, firewood and even your home's siding.

Wolf spiders may also venture into homes in the fall when they’re looking for a warm place to spend the winter and raise their young. In domestic environments, they can often be found around houseplants, doors, windows, basements and in garages. However, you won't be able to detect the presence of wolf spiders by looking for webs. Wolf spiders produce silk, but mostly for the purpose of creating egg sacs. They are nocturnal hunters that usually only come out of hiding after sunset to pursue and ambush their prey.
Related > Spider Eggs in the House: What Do You Need to Know?

What Should You Do If You See a Wolf Spider?

To help avoid being bitten, refrain from touching or picking up a wolf spider. You should also avoid squishing it as doing so may cause the release of hundreds of spiderlings.

Should you find that wolf spiders are frequent invaders of your home, or that their local populations have gotten out of control, you can always contact a pest control professional for assistance. At Terminix®, we have decades of experience helping homeowners put their spider problems behind them.