Bed Bug Bite vs. Mosquito Bite: What Kind of Bite is That? 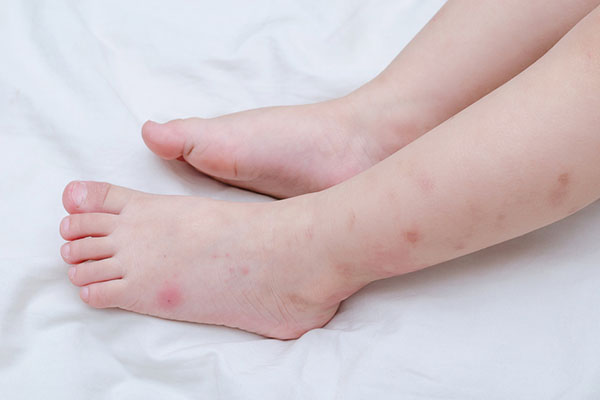 It's important to figure out what kind of bug bite you have, so pest control professionals can take the best course of action. The answer to the bed bug bite vs. mosquito bite question might seem obvious at first, but don't jump to conclusions. Just because you woke up scratching a red bump doesn’t mean it’s a bed bug bite. Just because you started itching after a camping trip doesn't mean it's a mosquito bite.

That’s because the distinguishing physical characteristics of a bed bug bite vs. mosquito bite aren't always enough to figure out which pest has your blood on its hands (or mouth, as it were). Here's what else you need to know to unmask the culprit:

Looking past the bite

Mosquito and bed bug bites are very similar. It's important to obtain circumstantial evidence in addition to visual evidence. For example, if you find bed bug feces and eggs in the crevices of your mattress, chances are the bites are from bed bugs. If you live in a warm climate and have no screens on your windows, mosquitoes could be your problem.

As far as appearances go, only bites from bed bugs tend to align with the edge of a sheet or where your body meets the mattress. The bites appear as a line or a row. Mosquito bites are often random and isolated. Even a cluster of mosquito bites will appear randomly placed. In addition, mosquitoes don't bite through clothing. Only bed bugs will crawl under clothes to find fresh skin. However, exposed skin is always preferred by both.

Mosquito bites are instantly visible and immediately begin to itch. Look for a raised white welt with oddly shaped, red boundaries. The bite will reduce to a red bump in a day or so. Mosquito bites usually self-resolve faster. And while just about everyone will react to a mosquito bite, some people don’t have reactions to bed bug bites at all. Additionally, bed bug bites can take minutes, hours or even days to show up. The flat, red welts generally won't itch at first, but will with time.

A few other bites to watch for

Now that you know how to tell the difference between a bed bug bite vs. mosquito bite, what about all the other biting insects out there? Spider bites may cause intense pain and swelling, but most are painless or barely noticed. Tick bites often still have the tick attached to the skin in the middle of the bite, but if not, a firm red bump will mark the spot. Lice bites are red, itchy spots located around the scalp, neck and shoulders.

Fire ant bites are actually stings that are usually painful and create a burning red bump, which is typically replaced by a hard, white pustule that lasts around a week. Flea bites appear as random dots around the ankles, legs and feet. In some people, flea bites can swell up in less than an hour and possibly turn into an open sore or blister in less than a day. Mite bites (including chiggers) create an inflamed rash that often centers around a crusted, itchy red welt.

Kissing bugs (or assassin bugs) are similar to bed bugs in nature, as are their bites. Additionally, both bugs carry the T. Cruzi parasite in their feces. T. Cruzi causes a deadly disease in humans called Chagas. Fortunately, unlike kissing bug bites, bed bug bites have not yet been shown to directly cause Chagas. Kissing bug bites tend to occur around a person’s mouth as they sleep. They are rarely found in most of the United States, but are common in Central and South America.

Whether it's a bed bug bite, mosquito bite or any other type of insect, it's vital that you eliminate anything that is biting you. While bed bugs have not been shown to carry disease, bed bug bites are itchy and sometimes ugly and painful. Don't let insects live off of your blood. Contact Terminix® today and bite back.