Scroll down to learn about mosquitoes with facts and information on these pests.

While warmer temperatures may mean more time outside and enjoying the great outdoors, mosquitoes and can put a damper on the fun. Mosquito bites can leave itchy marks in their wake, not to mention that some mosquitoes have been known to spread disease. Learn more about these pests, what attracts mosquitoes and how to best keep them at bay.

What is a mosquito?

Mosquito is a name given to a group of common flying insects. There are more than 3,500 types of mosquitoes in the world. Most mosquito bites result in itching and swelling around the area of the bite in humans.

The mosquitoes that can spread pathogens to people or animals are called vectors. They can pick up viruses and parasites when they bite people or animals that are infected. When you are bitten by an infected mosquito, you may be at risk for becoming sick.

There are some easy ways to identify mosquitoes. Mosquitoes have six legs and a pair of wings they use to fly. Their bodies are divided into three parts: head, thorax and abdomen. Most adult mosquitoes range in size from one-quarter to one-half of an inch.

Mosquitoes' heads are equipped with antennae to detect the movement of air. Mosquitoes also have two eyes that can detect movement. One part of a mosquito that you may see with the naked eye is the straw-like structure that it uses to suck flower nectar or fruit juice, making them easy to identify. 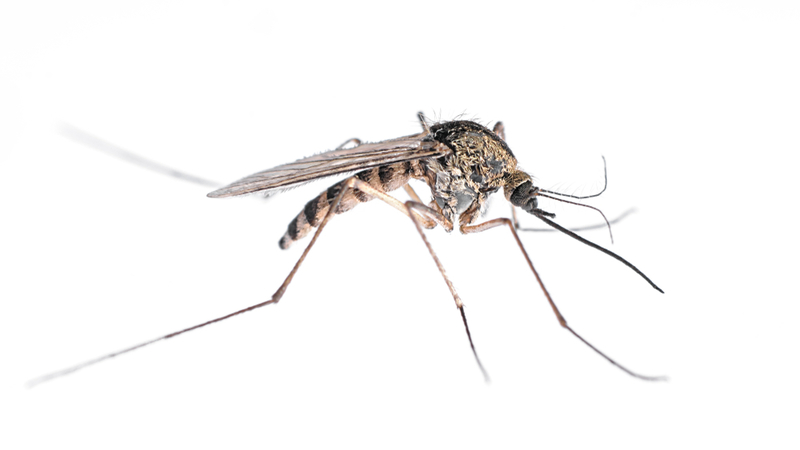 What are the differences between male and female mosquitoes?

There are several differences between male and female mosquitoes.

Male mosquitoes are smaller and have hairier antennae than females. Males do not bite and cannot spread disease. Their proboscis, the straw-like structure used for feeding, is not strong enough to pierce the skin.

Female mosquitoes are the ones that bite because they need blood protein for the development of their eggs.

Mosquitoes undergo four different life stages, with the first three happening near or in water. Adult mosquitoes usually mate in the air when a female flies into a swarm of males. The female stores and nurtures the sperm inside her body until she is ready to ovulate. She releases the sperm in time to fertilize the descending eggs. After a blood meal, a female mosquito can lay around 100 eggs at a time.

The four stages of the mosquito lifecycle are:

Where do mosquitoes prefer to breed?

Mosquito larvae and pupae live in still water, so mosquitoes are attracted to wet areas for reproduction. Some types of mosquitoes prefer permanent water. They lay their eggs near the edges of ponds and lakes. Permanent water mosquitoes may reproduce in swamps or marshes.

Floodwater mosquitoes look for temporary pools or containers to lay their eggs. They might lay eggs in irrigated fields and meadows or tree holes that collect rainwater. The eggs dry out and wait for a flood. When the water rises and covers them, they hatch.

Your backyard – with water features, damp areas, flower pot saucers and other areas where water collects – can be an ideal mosquito breeding ground.

How long do mosquitoes live?

The lifecycle of a mosquito is brief but busy. Mosquito eggs can remain viable for a few months in dry conditions waiting for water to flood them and cause them to hatch. Once the eggs hatch, the larvae can develop into pupae in about five days. The pupae stage takes another two to three days, and then the mosquito is an adult flying insect.

Once a mosquito becomes an adult, it can live for two to four weeks. The female mosquitoes tend to live a little longer than the males, giving them more time to reproduce. On average, one female mosquito can lay about 100 eggs, three times in its lifetime.

What do mosquitoes eat?

The food pyramid for mosquitoes is fairly simple.

Male mosquitoes eat only nectar and fruit juices. They do not bite people or animals. Their bodies use the sugar from their food to produce energy for survival.

In addition to nectar, female mosquitoes must consume protein. They get the protein they need to produce eggs from blood. Depending on the type of mosquito, the female will bite people or animals or both. 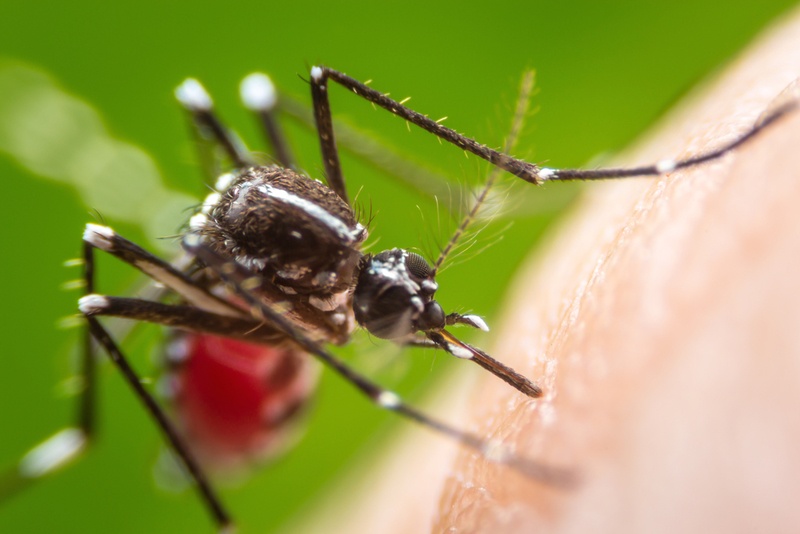 What are mosquito bite signs and symptoms on humans?

The itch of a mosquito bite may lead you to wonder what it's all about.

Mosquito bites are a common occurrence, especially on children in warm weather. The area where the mosquito pierces the skin can become red, swollen and itchy. According to the Mayo Clinic, other characteristics of mosquito bites may include:

Children, or adults not previously exposed to the type of mosquito that bit them, may also experience: 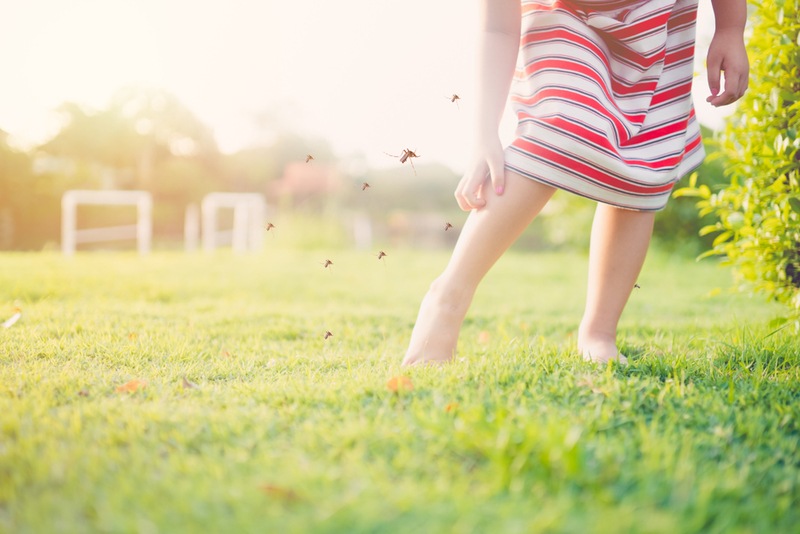 Why Do Mosquitoes Bite?

Female mosquitoes cannot reproduce without the protein in blood. For female mosquitoes, biting is a survival instinct. Mosquitoes require a specific protein derived from blood in order to breed. When mosquitoes are biting, they're preparing to breed.

Mosquitoes seem to know what they need and will fly right up your pants leg to get it. The females have a receptor that detects carbon dioxide, a gas that every human exhales. Studies show that these same receptors also make it easy for mosquitoes to find bare skin by smell.

Mosquitoes are also attracted to the smell of human sweat, which contains lactic acid, a compound found in fruit juice. Their complex sense of smell helps them find food. A blood meal is essential to the reproduction activities of a female mosquito.

Why do mosquitoes bite some people more than others?

It is true, mosquitoes are more attracted to certain people. The difference in attraction has to do with the scents people exude. Factors like metabolism rate and blood type affect how attractive you may be to mosquitoes.

Studies show that pregnant women are more attractive to mosquitoes. That is likely because pregnant women exhale 21% more carbon dioxide, excrete a higher level of substances like lactic acid, and have a higher body temperature.

Age and blood type seem to be other factors in mosquito attraction. One study showed that in a controlled environment, women received more bites than children. Another study found that mosquitoes exhibited a different rate of attraction to people with different blood types. The discrepancy was attributed to the varying levels of metabolites in blood of different types.

All the studies concerning who is more attractive to mosquitoes point to their highly developed sense of smell. Mosquitoes are not only attracted to human sweat, but they can distinguish different compounds on the skin that they prefer.

Why do mosquito bites itch?

A mosquito bites you by inserting a straw-like structure into your skin and sucking out a tiny amount of blood. During the process of biting, the mosquito injects some of her saliva into your skin. Your reaction to the saliva is what causes the bite to itch. People's reactions to mosquito bites vary. Some find them only mildly itchy while others require treatment for a severe itch.

How to treat mosquito bites?

Medical experts at the CDC suggest a couple treatments for mosquito bites depending on how uncomfortable the condition is. Washing with soap and water and applying an ice pack for 10 minutes should help reduce the swelling and itching. An over-the-counter anti-itch cream or a homemade poultice of baking soda and water can be applied for persistent itching.

Most mosquito bite symptoms will resolve on their own in a couple of days, according to the Mayo Clinic. If the bites are accompanied by headache, body aches, fever or signs of infection, it is best to seek medical treatment. Some mosquitoes can spread germs, although not everyone infected by a mosquito gets sick.

How to prevent mosquito bites?

Perhaps the best way to deal with mosquito bites and potential adverse reactions is to avoid getting bitten in the first place. The CDC recommends preventing mosquito bites by using insect repellent. There are several substances known to repel mosquitoes and available to the consumer. The CDC warns that you should always follow the instructions on the label of insect repellent products.

Other CDC-recommended prevention measures include:

The CDC also recommends the use of air conditioning and screens on windows and doors to prevent mosquitoes from getting inside. Eliminate standing water around your home so mosquitoes don't have a place to lay eggs.

What health risks or diseases come from mosquitoes?

There are a variety of diseases and health risks that may accompany a mosquito bite.

How dangerous are mosquito bites and related diseases?

Mosquitoes are considered vectors, which means they may carry pathogens that can transmit disease from one human or animal to another. According to the World Health Organization (WHO), vectors cause more than 700,000 deaths annually worldwide by spreading infectious diseases. Malaria and dengue are two of the most prevalent diseases transmitted by mosquitoes.

Other diseases carried by mosquitoes include:

Most of these diseases are rare and few cases are found within the U.S., apart from the West Nile virus.

What are common types of mosquitoes?

There are four types of mosquitoes common to the U.S.: southern house, northern house, Asian tiger, and yellow fever.

Where do mosquitoes live?

While mosquitoes like water, you'll find more living around stagnant water than you will in lakes and streams. Beneficial predators in permanent bodies of water tend to keep the mosquitoes away.

Out of the 200 different species of mosquitoes that live in the U.S., most live near swamps or temporary pools and puddles. Mosquitoes can lay their eggs anyplace where water might collect, such as:

When are mosquitoes most active?

Throughout most of the country, mosquito season begins in the summer and continues into the fall. In the warmer southern states, mosquitoes could be active all year.

Most mosquitoes are more active at night, partly because it allows them to avoid damage from the sun and daytime predators. Mosquitoes tend to become more active around dusk. After mating, the female mosquito is less active for several days until she lays her eggs.

Where are mosquitoes common in the U.S.?

Mosquitoes live all over the U.S. but are more common in areas with warm moist air. This includes the southern states and other areas where there is still or stagnant water. Because mosquitoes can live indoors, and they feed on blood from humans and animals, they live wherever you live.

How to keep mosquitoes away?

To avoid problems with mosquitoes, start by keeping them away from your house. Remove standing water around your house where mosquitoes might like to lay eggs. Try taking these steps:

To control mosquitoes inside your house, keep doors and windows closed unless they have a screen, and use air conditioning whenever possible. You should also destroy potential mosquito eggs by scrubbing any open container that has water in it every week. Flowerpots and vases are two common sources of moisture inside your house that invite mosquitoes.

Mosquitoes are small and multiply rapidly. They also have the potential to carry pathogens that can cause disease. If you have a problem with mosquitoes around your house, the best thing to do is hire a professional. Contact Terminix for a free inspection today.

Get started with mosquito treatment today

Mosquito Related Diseases: What You Should Know

Facts About Mosquitoes And Their Relationship To Humans

Simple Ways To Identify a Mosquito

Mosquito Season - When Is It In Your State?

Why Can't All Mosquitoes Transmit Diseases