Anyone who's ever been bitten by a fire ant can tell you it's a painful and unpleasant experience. Fortunately, there are steps you can take to minimize any symptoms until the bite heals. 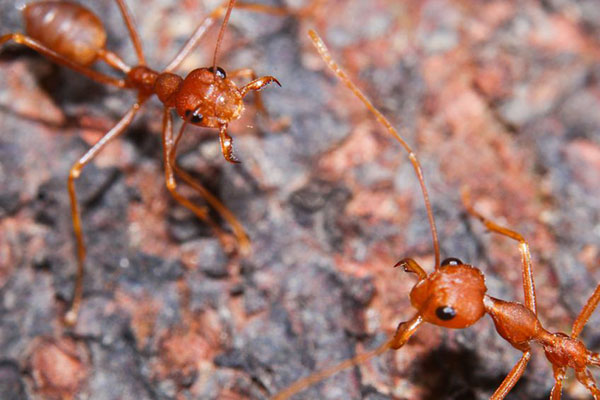 Learn everything you need to know about fire ant stings and what you can do to get rid of fire ants near your home.

What Happens If You Get Bitten by a Fire Ant?

If you mistakenly make your way through a fire ant bed — often easily spotted as a mound of soil and sand — the female workers go into defense mode. They'll first bite you to get a solid hold, and then they'll sting you about seven times (each) to inject their venom. This usually has the desired effect of getting you out of their mound.

According to MedlinePlus, on online encyclopedia provided by the United States National Library of Medicine, the body can react to fire ant bites in the following ways:

Most people don't have severe reactions to fire ant bites, but it's always a possibility, especially in children and people who have a history of allergic reactions to insect bites. The Mayo Clinic states that you should seek emergency care for insect bites if you experience the following:

What Is the Best Thing to Put on a Fire Ant Bite?

Before you start treating the fire ant bites, first make sure you knock all the ants off quickly and move away from the mound. The Mayo Clinic says that mild reactions to insect bites should be treated by washing the affected areas with soap and water. Afterward, you can apply a cool compress to help reduce pain and swelling.

What is the best thing to put on a fire ant bite? The Mayo Clinic recommends applying 0.5 or 1 percent hydrocortisone cream, calamine lotion or a baking soda paste to the bite several times a day until the symptoms go away. They also suggest taking an antihistamine to help with itching.

Should You Pop a Fire Ant Bite?

After about 24 hours, a pustule may form at the site of a fire ant bite. Resist the temptation to pop it. According to Seattle Children's Hospital, popping fire ant bites could result in infection. If you leave the pustules alone, they usually dry up in about four days. However, if you do accidentally scratch a bite open, apply an antibiotic ointment up to three times a day for one to two days to help prevent infection.

How Long Does It Take for Fire Ant Bites to Go Away?

Fire ant bites typically go away in about eight to ten days, assuming they haven't been opened and infected. The timeline for fire ant bites given by Seattle Children's Hospital is:

How Do You Get Rid of Fire Ants?

DIY ant treatment can be both a difficult and ineffective undertaking, so it's best to head straight to an ant control professional. Our expertly trained and experienced Terminix® ant control technicians can identify problem areas and help come up with an effective treatment plan to help control fire ants and, thus, keep bites at bay.