What Is An Ant Colony?

Ants live in complex social colonies, with the queen being the leader and the workers foraging and protecting their home. Learn more about ant colonies. 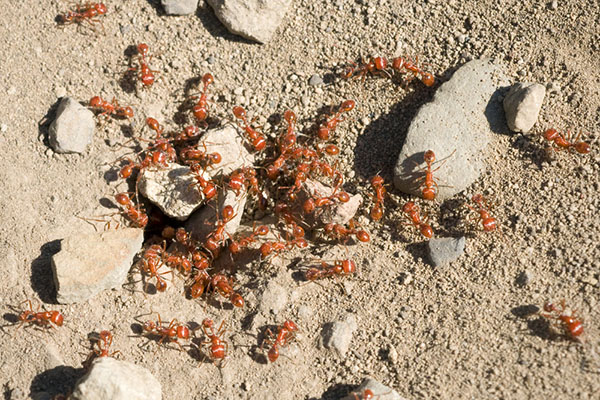 The term "ant colony" describes not only the physical structure in which ants live, but also the social rules by which ants organize themselves and the work they do. Ant hills formed by soil nesting ants are familiar sights. However, these mounds are not actually ant colonies. Instead, they mark the entrance and exit to the colony. These mounds are made up of the dirt, sand and other material the ants must remove as they dig the underground tunnels and chambers in which they nest. In fact, most ant colonies stretch deep underground, some even as deep as 25 feet.

What kind of ants live in an ant colony?

In terms of social organization, ant colonies are typically home to four different types of ants. The queen ant, as her name suggests, is both the founder and leader of the colony. Her primary function is to populate the colony by laying thousands of eggs. The queen's chambers are located deep within the ant colony as a protection against predators. Queen ants live much longer than the drones and workers who serve her—in some species up to 30 years. They sport wings and are much larger than the average ant encountered outside the colony. Drones are male ants whose only function is to mate with the queen so she can lay her eggs. Drones die as soon as they've fulfilled this function and are rarely encountered outside the colony. Most ants are females, and nearly every ant encountered outside of the nest is a female. Worker ants are females, but unlike the queen, they don't lay eggs. Instead, they're responsible for building and maintaining the nest, protecting the colony from other ants and, most importantly, feeding the colony. Workers forage for, gather and allocate food, making sure the queen's offspring will grow to fulfill their responsibilities to the colony. Worker ants are never idle. Depending upon the ant species, workers can live as long as a few weeks or up to a full year. Sometime in the life of every ant colony, the queen lays eggs that hatch into winged males and females known as alates or reproductives. Once they mature, these ants leave the colony in swarms. Their job is to establish new colonies. As with drones and queens, the males die soon after mating, while a small number of females survive to become new queens.

What is the average lifespan of an ant colony?

Once established, ant colonies tend to live as long as their queen, if not longer. Therefore the average lifespan of an ant colony is specific to the species of ant. Some of the worst ant pests are fire ants and carpenter ants. Fire ants are an aggressive and invasive species that can be very harmful to livestock and even humans, especially children. Fire ant queens can live—and lay more than 1,000 eggs a day—for as long as seven years. Carpenter ants build their colonies in wooden structures and can cause significant damage to your home. However, unlike termites, they do not feed on wood, but rather, hollow it out to make their nest. Carpenter ant colonies can flourish for up to five years. Generally speaking, the larger the nest or mound, the more mature the colony.

What is the average population of an ant colony?

The average population of an ant colony also depends upon the species of ant. Fire ant colonies can be home to tens of thousands of ants. Like some other species, fire ants can even form what are called supercolonies. These supercolonies are actually cooperative networks of multiple nests, queens, workers, etc. Supercolonies for some species of ants can cover territories spanning miles and be home to millions of ants. Carpenter ant colonies tend to be somewhat smaller, and their populations grow more gradually. Also, carpenter ant colonies tend to support only a single queen. Odorous house ants or stink ants (if stepped on or otherwise squashed release a sickly sweet smell compared to rotten coconuts) often forage for the sugary foods they prefer inside human dwellings. Like fire ants, their colonies can be home to multiple queens. These ants also move often, setting up many temporary nests that make it very difficult to estimate the exact number of ants in the colony proper. Generally speaking, no matter what kind of ant you see in and around your home, assume that there are many more ants nesting nearby, either in the hundreds or the thousands. Call Terminix® today to have a pest control specialist inspect your property for signs of ant colonization.