How to Identify a Carpenter Ant Queen

Carpenter ants common invaders in homes across the United States. These ants excavate wood as they tunnel and build their nests. While they most frequently nest outdoors, they can be found on roofs and in woodwork near sources of moisture, causing structural damage to homes. 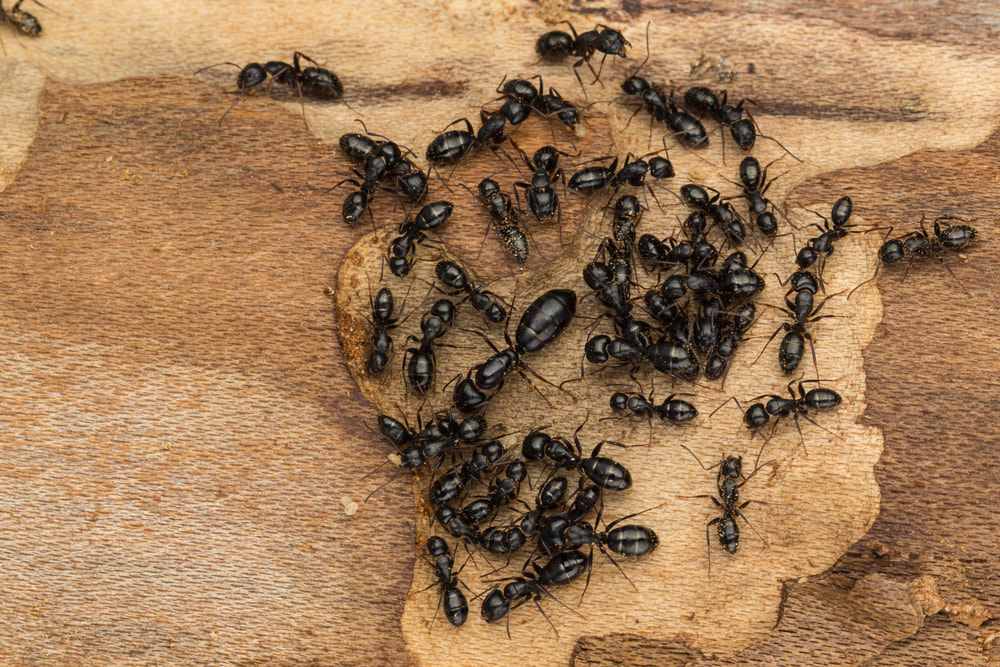 Like other species of ants, carpenter ants have a sophisticated social structure and caste system. The head of the colony is the queen, and successfully treating a carpenter ant infestation typically requires eliminating the queen to halt reproduction. Find out what a carpenter ant queen looks like and learn how you can help prevent infestations in your home.

Carpenter ants are one of the largest ant species in North America. The size of a carpenter ant depends on its species and its role in the colony. Generally, these ants measure between one-eighth and five-eighths of an inch in length. Worker ants may vary considerably in size and may be identified as “major” or “minor,” depending on their size and role.

These ants also vary in color according to species and may be red, brown, black or yellow.

Carpenter ants also have a constricted waist and bent antennae with a single node between their thorax and abdomen.

Winged carpenter ants are frequently confused with termites, a much more destructive home pest. However, there are a few key differences between the two insects that can help you easily tell them apart:

How to Identify the Queen

First, it’s important to note that it’s extremely rare for most people to encounter a queen. That’s because it’s the job of the colony to protect the queen, so she stays hidden in a wood nest most of time.

Carpenter ant queens are much larger than other ants in the colony and may measure up to an inch in length. If the queen is ready to lay eggs, she is easy to identify because she is the largest ant in the colony.

A single carpenter ant colony may have multiple queens. When females reach reproductive maturity, they have wings and participate in mating flights, or “swarms,” in which they fly along with winged males. These typically occur in the spring and summer. After mating, the males die, and the females lose their wings and search for a suitable nesting place. Each queen feeds her first eggs, usually a brood of 15-20, completely on her own using stored fat and her wings.

This first brood becomes the colony’s workers. They then assume the duties of foraging for food and caring for young. The queen’s sole purpose then becomes laying eggs.

One of the most unique aspects of carpenter ants is the way they nest and establish colonies. This is also one of the primary reasons they can be so difficult to control. Carpenter ants create two primary kinds of nests or colonies: the parent and the satellite. According to Ohio State University, the parent nest contains the queen, as well as eggs and small larvae. Satellite nests house larger larvae and pupae. Parent colonies are usually found in damp or decaying wood near sources of moisture, while satellite colonies may be found in drier environments.

Carpenter ants found inside homes usually belong to a satellite colony. These can be established in a variety of locations, including hollow doors, attic insulation, curtain rods and small voids around the home.

Visible ants are usually workers foraging for food. They are most active at night and can travel up to 100 feet from their nest to a food source.

There are a few steps you can take around your home to help limit carpenter ant activity or infestations:

Because effective carpenter ant control means removing as many satellite colonies as possible and attempting to eliminate the queen and parent colony, it’s wise to call a professional. The parent colony can often be difficult to locate and remove. The pest control specialists at Terminix® can help find and control carpenter ant populations on your property. Call for a consultation today.