What Are Those Big Red Ants in My Yard?

If you come across a colony of big red ants in the yard or near your home, your first instinct may be to sound the fire ant alarm. However, not only are fire ants actually pretty tiny, but there are more than 700 species of ants in the United States, and spotting the differences between the various types of red ants can be tricky. 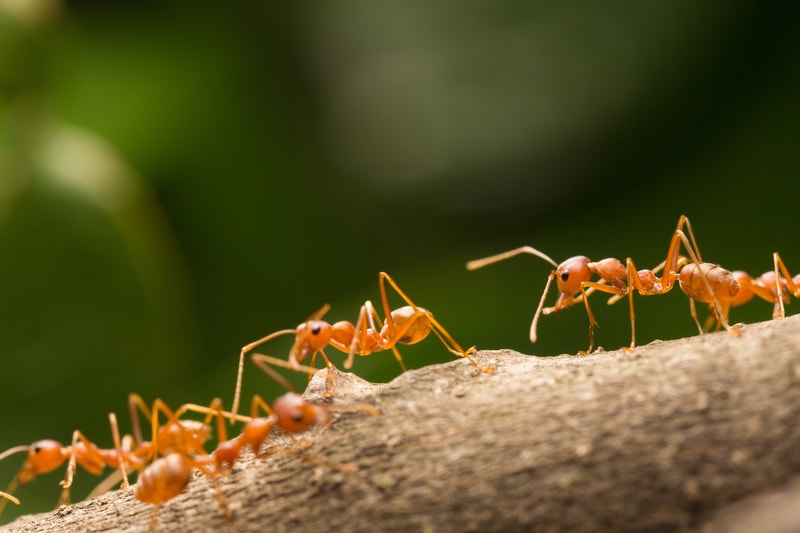 Learning more about the different species of big red ants common to your area can make it easier to identify the ones you are seeing. Here are a few basic facts about fire ants, as well as some big red ants you may encounter.

Are red ants and fire ants the same?

Not all red ant species are fire ants, and not all fire ants are red in color. In fact, most ants are not actually red. They are various shades of brown. True fire ants sport a red or reddish-brown appearance and belong to the genus Solenopsis.

Other species of red ants can be mistaken for fire ants due to their reddish-brown appearance and a few similar characteristics.

Which red ants are dangerous?

Unless they are the fire ants mentioned above, red ants are generally more annoying or destructive than they are dangerous. For example, carpenter ants are probably more interested in the food you have spilled or left behind.

While carpenter ants don’t eat wood, they nest in it. They can cause damage to wood structures in the process of creating galleries they use for nesting.

Tawny crazy ants do not have stingers, but they can bite. Although their bite is mild, an encounter can be unnerving because they tend to swarm in chaotic fashion.

They are more likely to alarm you by invading places you don’t normally expect to find ants. Tawny crazy ants are known for building colonies in odd places like pipes, car engines and computers, and for sometimes short-circuiting electronics. Once they move in, they can be very difficult to get rid of.

Fire ants, especially RIFA, will defend themselves by biting and stinging if they feel threatened, and their stings can be both painful and dangerous. When these big red ants sense a threat, they may respond by crawling up the victim to investigate the disturbance. Once the person realizes ants are crawling on him or her and reacts by brushing them off or something similar, the ants will likely perceive that as a threat and begin to bite and sting the victim.  Each fire ant is also capable of stinging multiple times.

Approximately 1 percent of the population is hypersensitive to ant venom, and for some of those individuals, fire ant stings can cause lethal allergic reactions. Victims who are young, elderly or have suppressed immune systems are most likely to experience a severe reaction. Even healthy individuals risk experiencing anaphylactic shock if stung multiple times.

What are the signs that a fire ant bite is serious?

According to the Mayo Clinic, if you experience the following symptoms after a fire ant bite, seek immediate treatment.

Avoid coming in contact with fire ants whenever possible. Fire ant mounds can be as large as 2 feet high and are often found in sunny areas of lawns, pastures, parks and fields. Mounds may also be present in rotting logs, around stumps and trees and sometimes under houses and other buildings.

Regardless of the species, red ant colonies can quickly get out of control in the house or the area around it. Terminix® offers professional services and lasting solutions tailored to your pest control situation. Contact Terminix today to learn more.