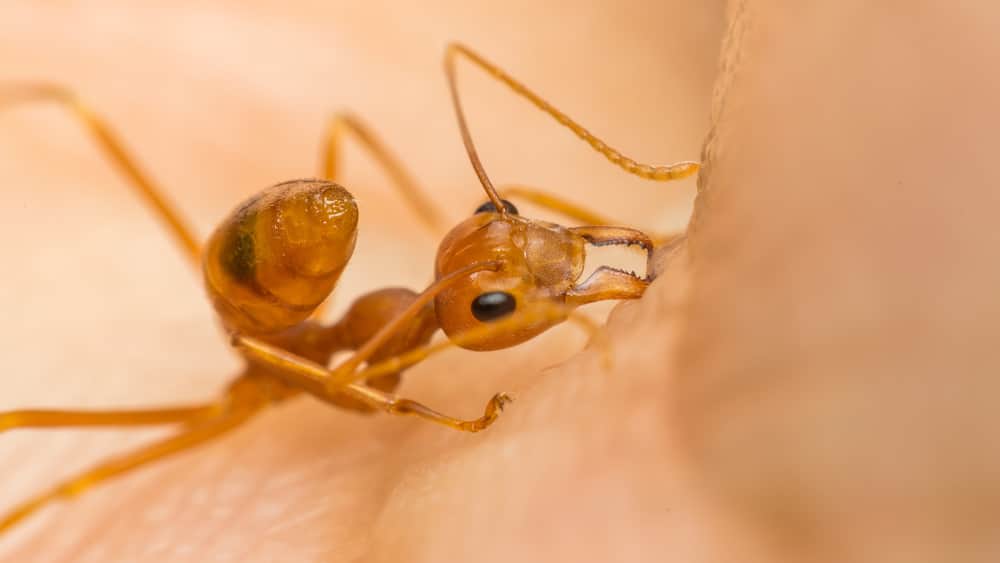 There are many types of insects that can bite, and their bites can often be confused with one another. Ants are just one type of these biting insects. There are more than 12,000 species of ants in the world and more than 700 in the United States alone. Do all ants bite? Learn that and whether or not what you think are bites are actually stings.

The question “Do all ants bite?” might seem like it has a simple answer, but in reality, it’s a little complicated. Generally speaking, all ants do have chewing mouthparts that they can use to bite what they’re eating. However, many house-infesting ant species are so small that their mandibles aren’t able to hurt people when they bite. It’s actually the sting that some ants dole out that hurt, which we’ll talk more about below. These stings may be mistaken for bites.

Typically, ants will sting if they feel they or their nests are being threatened or if they’re attempting to get food.

HOW TO IDENTIFY ANT STINGS

Fortunately, while inconvenient and irritating, most ant stings are relatively harmless. Regardless of the species responsible, ant stings are typically accompanied by redness, pain, burning, mild swelling and possibly itching.

In most cases, symptoms will subside within a few days.

Some ants, however, can sting with more ferocity and cause additional complications. Perhaps the most notorious stinging ant is the red fire ant. These stinging ants are known for aggressively defending their nests and swarming potential invaders, inflicting dozens or hundreds of bites at a time. In most people, fire ant stings result in red welts with white pustules. The pustule may appear 6 to 24 hours after being bitten, and it may last for up to 10 days.

HOW TO HELP CONTROL ANTS
The best way to avoid being stung by an ant is to be vigilant and control populations in and around your home. In the case of fire ants, you can minimize your risk by paying attention to your surroundings when outdoors and taking care not to step in a fire ant mound.

Because there are so many species of ants and they can live in large colonies, they can be difficult for homeowners to control. Baits are effective on some species, but others may require treatment of the entire colony. Additionally, identification of ant species can be tricky, and this step is crucial to determining the proper treatment method.

Due to the challenges associated with effectively controlling ants, it is beneficial to consult a pest control professional when dealing with infestations on your property. Terminix® offers ant control – get your free pest estimate today.