How to Get Rid of Ant Hills in Your Yard

The Northern Hemisphere is finally tipping towards spring, which means many people living in cooler climates will soon be trading out rakes and snow shovels for lawn mowers. Regardless of which region of the country you live in, however, anyone who enjoys working in the yard can tell you that ant hills can easily mar the most manicured of lawns. 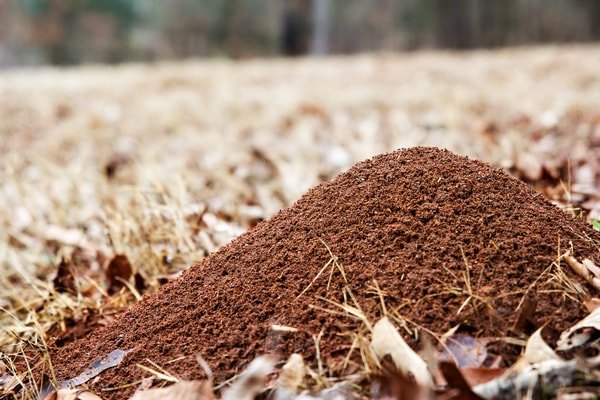 Additionally, if you live in an area of the United States that's inhabited by fire ants, your yard not only loses aesthetic appeal — it can become a minefield of potential pain.

Related > Do All Ants Bite?

It's safe to say that almost no one wants to see ant mounds in their yard or around their house. Learn about the landscape blemishes ants call “home," and then get some tips that can help you figure out how to get rid of ant hills.

When considering the best means of destroying ant hills and their inhabiting colonies, it helps to know a little bit about the makeup of the ant mounds themselves.

For example, many people think that ants actually live in the mounds, and they sometimes do, but not always. In fact, the tunnel systems ants build in order to shelter their colonies are much more complex. Most ant colonies dig deep into the ground, creating a system of tunnels and chambers. As they tunnel, they carry the displaced particles of dirt or sand out of their colonies.

So what are ant hills made of? They're made up of piles of the sand and soil ants remove as they dig. These piles typically mark the entrance and exit to the underground colony, rather than actually housing the ants.

The Difficulty in Destroying Ant Hills

If you've ever attempted to destroy an ant hill, you've probably experienced the frustration of seeing it crop back up in the same spot or a new nearby location. This is because the actual colony has not been addressed and needs to be removed to help prevent these ant hills. Getting rid of ant hills can be a major challenge for three reasons:

What if your problem isn't destroying ant hills, but an infestation inside your home, like carpenter ants, who don't build ant hills? Contact Terminix for help.