How to Help Get Rid of Moles in Your Yard

Underground pests can be among the most difficult to control. They rarely surface or allow themselves to be seen in broad daylight, and their tunnel systems provide them both shelter and opportunities to escape unwanted attention. 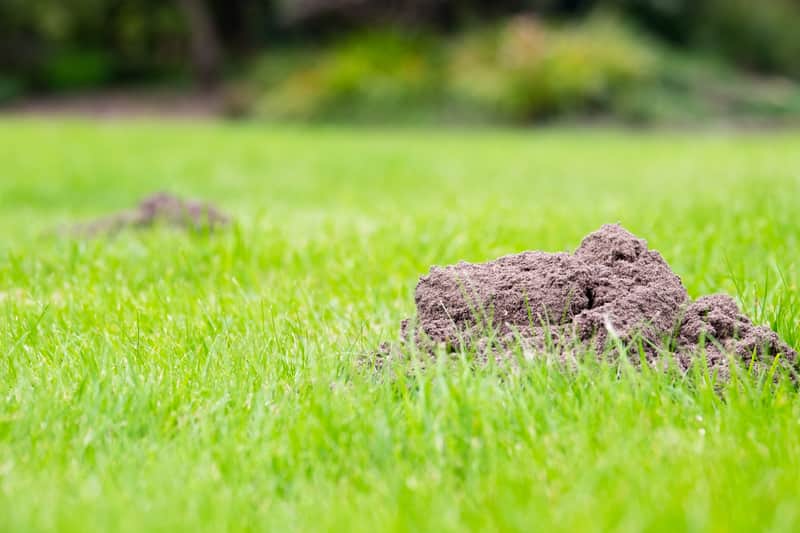 Just figuring out which unwanted subterranean guest is making your yard unsightly can be tricky. Mounds, holes and patches of dead grass can be caused by gophers, shrews, moles and even armadillos.

Of all these animals, moles are the most proficient diggers. The mole most commonly encountered by homeowners in the United States is the Eastern mole (Scalopus aquaticus). The average mole is about 6 inches long and weighs, at most, 4 ounces. It’s covered in thick gray-brown fur. In fact, mole fur is extremely soft with a very nice texture and was used to make powder puffs for face powder in years past. It also features a short snout, and its eyes and ears may not be visible on first inspection.

Moles are frequently mistaken for rodents. However, moles are members of the Talpidae family, and are more akin to bats, small mammals that are also almost completely blind and rely on their sense of both sound and touch, — than they are to mice, squirrels, rabbits, etc. Should you be lucky enough to spy a mole, you’ll notice its most distinguishing characteristic is its front paws. Large, hairless and outfitted with five, long claws, these appendages are designed specifically for breaking up and shoveling soil.

To build nests in which to raise their young.

Moles typically breed in the spring and produce small litters. Outside of the brief period (about four to six weeks) they spend in their mother’s care, moles are not social creatures.

Worms and grubs are the staples of the mole diet. Moles, like snakes and scorpions, are actually venomous animals. Their bite is enough to paralyze any insect prey that falls into one of its traps. Because they expend so much energy in digging, moles must eat almost constantly. Experts at the Penn State College of Agricultural Sciences have observed that moles can consume their own body weight in insects each day. With its high metabolism, a single mole can dig out up to 15 feet of soil in a single hour.

Moles dig their burrows deeper than the tunnels they use for foraging. Some mole nests can be found up to a foot beneath the topsoil. Molehills result from this burrowing activity, while ridges are a product of the more shallow excavations moles undertake as they mark out their territory.

Moles can be beneficial animals. The root-sucking grubs moles dine upon can be far more damaging to ornamental plants, trees and grasses. They also aerate the soil, which increases the circulation of nutrients.

That said, the damage caused by moles can be much more than cosmetic.

You can use fencing as a mole-preventative measure. The Safe Rodent Control (SRC) coalition recommends digging a trench 2 to 3 feet deep and lining it with wire mesh. The SRC further recommends eliminating other pests, such as grubs, likely to attract moles to your yard. Keeping your yard clear of dead leaves and other organic debris can also create a less hospitable environment for moles and make evidence of their presence much easier to spot.

DIY methods for helping get rid of moles can be dangerous. One of the most effective and safest things people can do is contact a wildlife control professional, many of which will use trapping. Some traps are designed, like mousetraps, to kill the pests outright. Other traps are meant to simply capture the mole and facilitate its relocation to an area where its natural behavior will be less destructive. However, this equipment has the potential to injure anyone who fails to install it properly. Again, it would be best to leave trapping to the professionals to remove animals safely.