How Common Are Common House Spiders?

Spiders tend to get a bad rap. They’re mainstays of horror movies and haunted houses, and many of us are terrified to find a spider lurking in our homes. However, the truth is that people’s fear of spiders is mostly unwarranted. 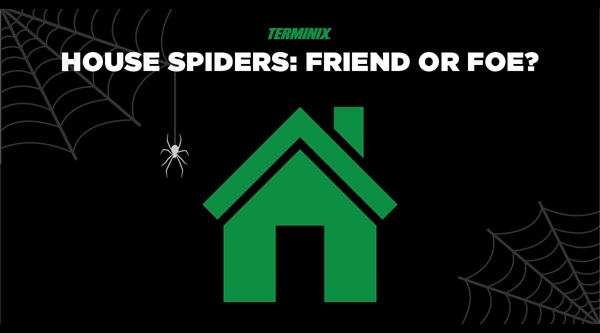 However, the truth is that people’s fear of spiders is mostly unwarranted. Of the more than 4,000 spider species found in the contiguous United States, most are harmless to humans. Of course, there are some dangerous spiders like the black widow and brown recluse. However, in general, spiders are beneficial predators that feed on insects, other spiders and arthropods, helping reduce pest populations in and around homes, landscapes, gardens and crops.

Most common house spiders pose little threat to humans. While they may bite if they feel threatened, most bites are typically either harmless or cause only minor irritation. Here are some common spider species you might spot in your home.

Despite the harmlessness of most common house spiders, two species can be extremely dangerous: the black widow and the brown recluse.

Black and shiny with a telltale red hourglass-shaped marking, the black widow spider is typically found around woodpiles and other undisturbed areas. Though biting can be rare, females can be especially aggressive when their webs are disturbed. Bite symptoms include fever, increased blood pressure, sweating and nausea.

Light to dark brown with violin-shaped markings on its back, the brown recluse spider is typically found outdoors in woodpiles and debris, and indoors in closets, attics and crawlspaces. Though biting can be rare, their bites may become painful after several hours and can produce open, ulcerating sores in rare cases. Bite symptoms include a burning sensation at the site of the bite, restlessness, fever and difficulty sleeping.

Although most spiders are generally harmless, most of us still don’t want them in our homes. Are you dealing with a house spider infestation? Contact Terminix and let our technicians help take care of them.