What Exactly Is a Huntsman Spider?

You’ve probably heard of black widows and brown recluses, but do you know what a huntsman spider is? 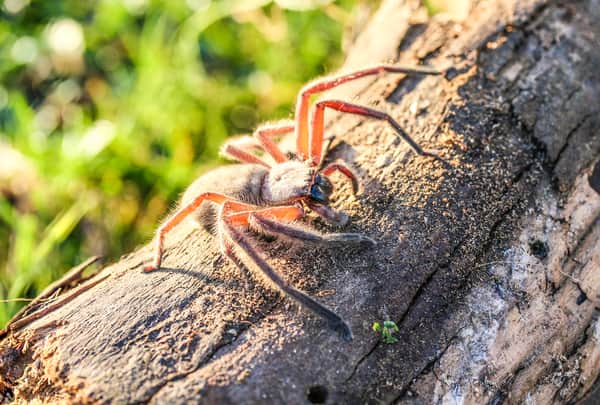 Learn more about these fascinating arachnids, and find out whether or not you should try to avoid them.

So, exactly how massive are these creatures? Well, the average huntsman spider’s legs may reach as far as 5 inches from its body. However, some giant huntsman spiders have legs that can span as much as 12 inches.

Where Do Huntsman Spiders Live?

Huntsman spiders can be found in tropical and temperate regions in the world.

As mentioned before, these arachnids are especially prominent in Australia, where residents are used to dealing with them regularly. In the United States, however, some smaller species of Huntsman spiders can be found in the southern half of the country, in states such as Florida, Texas, Georgia and South Carolina. And these are just a sampling of the states in which you’ll find a huntsman spider. If a state has a warm enough winter to allow huntsman spiders to survive, they’ve generally got no problem sticking around.

What Do Huntsman Spiders Eat?

Huntsman spiders feed on a variety of insects, such as caterpillars, moths, cockroaches and other spiders.

So, how does a huntsman spider catch its prey? Well, this family of arachnids came by its name honestly. Unlike other spiders, huntsman spiders do not spin webs to trap unsuspecting prey. They hunt down their meals.

These critters are actually very quick, moving at speeds of up to one yard per second. If you ever see a huntsman spider running, it’s likely chasing down a meal.  Once the arachnid has caught the insect that’s destined to become dinner, it will inject the prey with an immobilizing venom.

Will Huntsman Spiders Harm Me?

While these arachnids are big, you’re still bigger, so most huntsman spiders will likely try to run away rather than bite. At the same time, they are capable of doling out painful bites if you try to handle them or inadvertently disturb them in their hiding places. Though there have been reports of people being bitten by huntsman spiders, there’s no indication that they use their venom in defensive strikes, according to the Queensland Museum in Australia.

Looking for more information about cool arachnids? Check out this post on jumping spiders or learn why scorpions glow.