What Do Flies Eat?

There are thousands of species of flies, and there are differences in their diets. Learn more in this article. 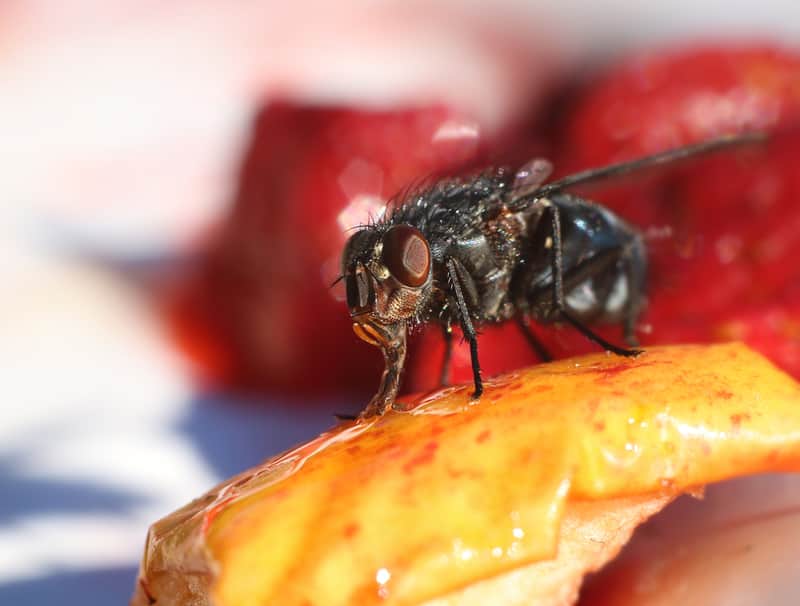 The "fly diet" isn’t some new trend to help you lose weight. That would be pretty gross considering the rotten nature of fly food. The following FAQs explain a fly's diet, giving you answers to questions such as "what do flies eat?" These answers will help you understand why fly control is so important for you and your family's health.

What do flies eat?

Just as there are thousands of fly species, flies have many food sources and preferences. The feeding habits of one species varies greatly from another. For example, mosquitoes are a type of fly that feed on decaying organic matter in the water while they are in the larval stage. As adults, they turn to plant nectar for sustenance, though they are better known for sucking blood.

Tachnid flies also feed on plant nectar as adults, but in their larval stage, they dine on other insects. Hessian flies eat grass, while bot flies eat animal tissue. The most recognizable fly – the house fly – sustains itself on rotting food and meat while at the larval stage. The decaying matter is preferably peppered with human, pig or horse feces, if the house fly larvae has its say. As an adult, the house fly prefers sweets, liquids and rotting fruit. And that explains why the "fly diet" was never invented.

How does the house fly eat?

Most flies have mouthparts that are best described as two sponge pads and a straw. Their lips have grooved channels that allow liquid to flow in from the two fleshy pads attached to the fly's lower lip (the labella). Since they cannot chew, flies have to dissolve solid food into liquid, or at least into particles measuring 0.45 millimeters or less. To do this, the fly regurgitates saliva from its stomach, which dissolves the food until it is digestible. The house fly then uses its proboscis to suck up the liquefied food.

Though they eat with their mouths, house flies taste with their feet. This is why they are always crawling on your food. Since they also "taste" spoiled meat and feces, the last place you want them crawling is on food you're about to put in your mouth – not to mention flies constantly defecate.

Contrary to popular belief, fruit flies don't actually eat fruit. Instead, they eat the yeast cells that grow on fruit, particularly rotting fruit. That's why you only see them pop up when fruit gets old, or around garbage storage and disposal areas, since that's often where people discard rotten fruit.

Flies are dirty, annoying and some species can bite. If you have a fly problem, don’t try to starve them out with some crazy fly diet or home remedy.