If you’ve ever taken a road trip through the southern half of the United States, you’ve likely seen an armadillo meandering down the side of the road. Do you know much about them though? 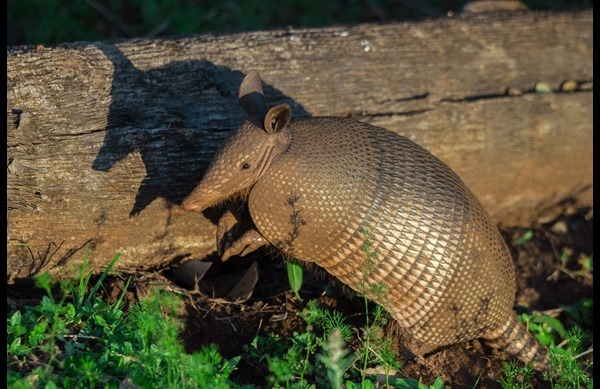 Armadillos have terrible eyesight but an excellent sense of smell, as well as strong legs and sharp claws. These peaceful mammals, typically no bigger than the size of a small dog, use their powerful noses to forage for food at night. Like raccoons and skunks, armadillos are helpful wildlife creatures, depending on where they make their home.

Where do armadillos live?

Armadillos enjoy warm, wet environments, which is why they stick mostly to the southern states. Most enjoy forests and grasslands, and because they can hold their breath for six minutes, they have no problem crossing a river or a stream. You can even see one walking along the bottom of a clear stream.

Armadillos burrow underground to sleep for up to 16 hours. They often have multiple burrows situated around their hunting grounds, but they aren’t territorial and have no problem leaving to find better feeding grounds. Their abandoned abodes often end up hosting other burrowing animals, like snakes, skunks and rats.

What do armadillos eat?

The nocturnal armadillo ventures out of its underground home to hunt for food in the early evenings after dusk. The bulk of their diet consists of insects like termites, beetles, grubs, cockroaches and scorpions, just to name a few. They’re also known to eat small reptiles and amphibians and their eggs in colder weather. A little bit of plant matter finds its way into the armadillo's diet, as well.

The short answer is no. It is important to keep in mind, however, that armadillos are wild animals and can possibly communicate diseases like leprosy and rabies if handled or eaten. (Yes, some people are a big fan of ‘dillo meat.)

But unless you try to catch one, it’s unlikely an armadillo will pay you any mind if you see one waddling by. Although catching one proves harder than you might expect — armadillos are surprisingly fast.

Is an armadillo the culprit ruining your yard?

If you suspect an armadillo has chosen your yard as its new favorite foraging ground, look for these clues:

Should you trap an armadillo yourself?

Again, the answer here is no. While you don’t want armadillos tearing up your lawn, they do provide a great service by eating undesirable insects. And remember: As wild animals, they could be carrying some harmful diseases.

A professional can more accurately pinpoint the critter causing damage to your property and knows how to set the appropriate traps at the best spots. A pest control professional can identify what's attracting the armadillos in the first place and help pest-proof your home and yard in case any other creatures are looking for some new burrows to set up shop in.