What Do Bees Eat?

Bees are color-sensitive insects that rely on their sense of vision to locate food. Learn why some bees drink nectar and why other bees gather pollen. 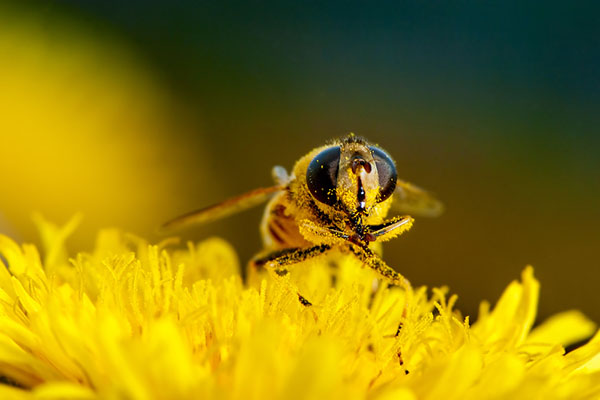 Bees are most commonly seen when they are foraging, which is the process of finding food and water. Bees may fly up to six miles in search of food, and may be quite far from their home when you see them in your yard or neighborhood. And since there are many types of bee, the answer to the question "what do bees eat" has many different answers. Here's what you need to know:


Q: Why do bees seem to want my food?

A: Honey bees are attracted to sugars, and may be especially attracted to liquid sweets. This is why they may be seen at your picnic or backyard buzzing around your watermelon, soft drinks or frozen treats. While bees are usually not aggressive when foraging for food or water, they can sting when disturbed, which can make them unwelcome guests.

Q: How do bees know which plants to visit?

A: Honey bees rely on their sense of vision to locate flowers. Bees see colors in the spectrum ranging from ultraviolet to orange, but do not see red (red flowers are visited by birds such as hummingbirds). The flower advertises itself to the bees with colorful petals, many of which have shiny patches of ultraviolet that humans can't see without using special equipment. These ultraviolet patches are called "bee guides" or "nectar guides." Like airport runway lights, these ultraviolet regions guide the bees to the nectar.

The shape of the flower is also important. Some flowers have flat areas for ease of landing by bees, and others have elaborate modifications to ensure that pollen sticks to any bee that visits.

Q: How do bees eat if some never leave the hive?

A: Worker bees drink the nectar and store it in their crop, an internal storage container. The bees then fly back to the hive and transfer the nectar to other worker bees through a process called trophallaxis. That's a nice way to say that they regurgitate the nectar to share it with the other bees.

Q: How do bees make honey out of nectar?

A: The worker bees in the colony mix the nectar with enzymes and deposit it into a cell where it remains exposed to air for a time, allowing some of the water to evaporate. The bees help the process along by fanning the open cells with their wings. The resulting product is what we call honey. The cell containing the honey is later capped with beeswax and kept for future use.

Q: How do bees gather pollen?

A: Pollen is the yellowish or greenish powder-like substance that sometimes comes from flowers. It can be very sticky. Honey bees have lots of little hairs on their body called setae. Pollen sticks to these hairs while the bees are in contact with the flowers. The bee's movement around the inside of the flower causes it to pick up pollen.

After getting pollen on their body hairs, the bees move it to a special area on their hind legs called pollen baskets. Foraging bees returning to the hive often have bright yellow or greenish balls of pollen hanging from these pollen baskets. Bees without pollen baskets may store pollen in specialized crops.

Q: What do bees eat before they become adults?

A: Honey bees mix the pollen with some nectar to form a high protein food mixture called beebread that is used to feed the immature bees, called larvae.

Q: If the bees are just gathering food, how do plants get pollinated?

A: As the worker bees move from flower to flower, they spread pollen to many different plants, including important foods such as vegetables, fruits, nuts, and other plants grown for seed and animal feed, such as clover.

During hard times when food is not easily accessible, bees will sometimes raid other, weaker honey bee colonies to steal honey. Guard bees at the hive entrance usually try to fight off invaders in stinging duels. Africanized honey bees have a noticeable tendency to raid other colonies, especially during periods of drought or famine.

Q: Do bees need water since nectar is a liquid?

A: In addition to food, honey bees gather water for use in cooling the inside of the nest on hot days. They also use water to dilute the honey when they feed the larvae.

Q: Does the queen bee eat the same food as the workers?

A: While the majority of honey bee larvae eat honey, there are certain larvae that are chosen to become future queens These immature bees will be fed with a substance called royal jelly. Royal jelly is a white secretion produced by young, female worker bees. Workers and drones are only fed royal jelly during the first few days of larval development, while future queen larvae consume royal jelly throughout their development.

Since chosen honey bee queens eat only royal jelly, they grow quickly and become twice the size of an ordinary honey bee.