Ticks and Tick-Borne Disease in the United States 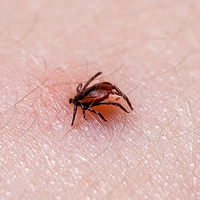 What are some tick-borne diseases of concern to public health in the United States?

Anaplasmosis, babesiosis, ehrlichiosis, Lyme disease and Rocky Mountain spotted fever are some examples of tick-borne illnesses in the United States. A complete list of tick-borne diseases can be found at the Centers for Disease Control and Prevention.

Lyme disease is the most prevalent tick-borne disease in the U.S. and has been a nationally notifiable disease since 1991. There are approximately 300,000 Lyme disease cases diagnosed each year, primarily in the Northeast and Midwest regions. It should be noted that the number of undiagnosed or misdiagnosed cases is unknown, hence there are likely greater than 300,000 cases per year in the U.S.

What species of ticks are responsible for transmitting tick-borne pathogens?

The Centers for Disease Control and Prevention provides detailed information and maps on tick species and geographic distribution in the U.S. However, comprehensive tick surveillance is not carried out in the U.S., hence distribution maps may not be completely accurate.

The American dog tick (Dermacentor variabilis) is common in the Eastern half of the U.S. and also in some areas of the West. This species is implicated in transmission of the (bacterial) pathogen that causes Rocky Mountain spotted fever, among other diseases.

The black-legged tick (Ixodes scapularis) is common in the Northeast and Upper Midwest portion of the U.S. It is primarily responsible for transmitting pathogens that cause Lyme disease (bacteria), anaplasmosis (bacteria), babesiosis (apicomplexan parasite) and Powassan disease (virus).

The brown dog tick (Rhipicephalus sanguineus) is found in all regions of the U.S. and transmits the bacterial pathogen that causes Rocky Mountain spotted fever.

The gulf coast tick (Amblyomma maculatum) is found in coastal areas of the Southeastern U.S. It is known to transmit some rickettsial (bacteria) pathogens, such as Rickettsia parkeri.

The lone star tick (Amblyomma americanum) is found in the eastern portion of the U.S. This tick transmits bacterial pathogens that cause diseases, such as ehrlichiosis.

The Western black legged tick (Ixodes pacificus) is limited to the Western coastal region of the U.S. It is responsible for transmitting bacterial pathogens that cause anaplasmosis and Lyme disease.

How to help avoid tick bites

Questing (host-seeking) ticks are found in medium- to high-length grass, likely near forest edges and/or borders of trails. In general, ticks climb up to the top of blades of grass and latch on to animals and people as they move through the grass. Regular mowing (e.g., around playgrounds and other areas where people congregate) will lessen the chance of human contact.

Repellents can be used (e.g., containing 20–30% DEET) on skin, and these products can last for several hours. There are also commercially available products, such as permethrin-treated clothing, that can be worn to help avoid ticks and have a long-lasting effect through several washings.

If you have pets, such as dogs, they should be given products to prevent tick exposure. There are medications and/or collars that can be used to protect dogs. Consult your veterinarian for more information. This can minimize the possibility that a pet will bring ticks into your home and also protect your pets against experiencing a tick-borne illness.

What to do if you find a tick on your body

If you see a tick crawling on or attached to your body, remove it immediately. Tweezers can be used to gently pull tick mouthparts out of the skin, being careful not to squeeze or twist the tick body. If you think you have been exposed to ticks, take a shower as soon as possible and inspect your body for ticks. Nymphal ticks can be as tiny as a poppy seed, so examine all areas of the body carefully. Clothing can be dried on high heat to kill any ticks that might be hitchhiking on clothing.

To immobilize the tick that you removed from your body, stick it to clear tape, and then store it in a freezer to kill it. Ticks can also be killed by immersion of the tick in alcohol.

You should never remove an attached tick or try to crush it with your fingers, as this activity may cause an infection if you are handling an infected tick. Pesticides, nail polish, or petroleum jelly should not be applied to ticks attached to your body (in an effort to remove/kill the tick) and no one should ever apply chemicals, such as bleach, to a tick attached to the body as this may result in personal injury. Hot matches are also not a good way to remove ticks that are attached to the body.

The longer a tick is attached to a host, the greater the likelihood that it will transmit a pathogen to the host, if the tick is infectious. In most cases, if the tick is removed within 24–48 hours (depending on the pathogen), there is a slim chance that a pathogen would have been transmitted to the host. The tick should be killed to avoid it attaching to another host.