Scroll down to learn about tick types, where they live, tick bites, and more.

It's reported that about 50,000 Americans suffer from tick bites each year, although there is a growing body of research that shows that this is only a reported number and that there are actually over 300,000 tick bites per year. These pests may carry pathogens that can transmit dangerous diseases. There are 84 confirmed species of ticks in the United States. However, there are fewer than 10 species from two families (hard ticks and soft ticks) that commonly bite humans.

The best way to help protect yourself from tick-borne illness is to learn what they look like, know the signs and symptoms of a tick bite, avoid areas where they hang out, wear an EPA-approved insect repellent, dress to keep them off your skin and to check for them after you've been near a place where ticks live.

On this page, we'll cover the following topics to help you more easily identify ticks, the signs and symptoms of tick bites and where they live so you can avoid them:

Ticks are small, eight-legged, blood-sucking insects. They feed on the blood of many animals and people. Many types of ticks exist in the United States. While they are hard to spot, these little pests can transmit dangerous pathogens that may lead to disease. 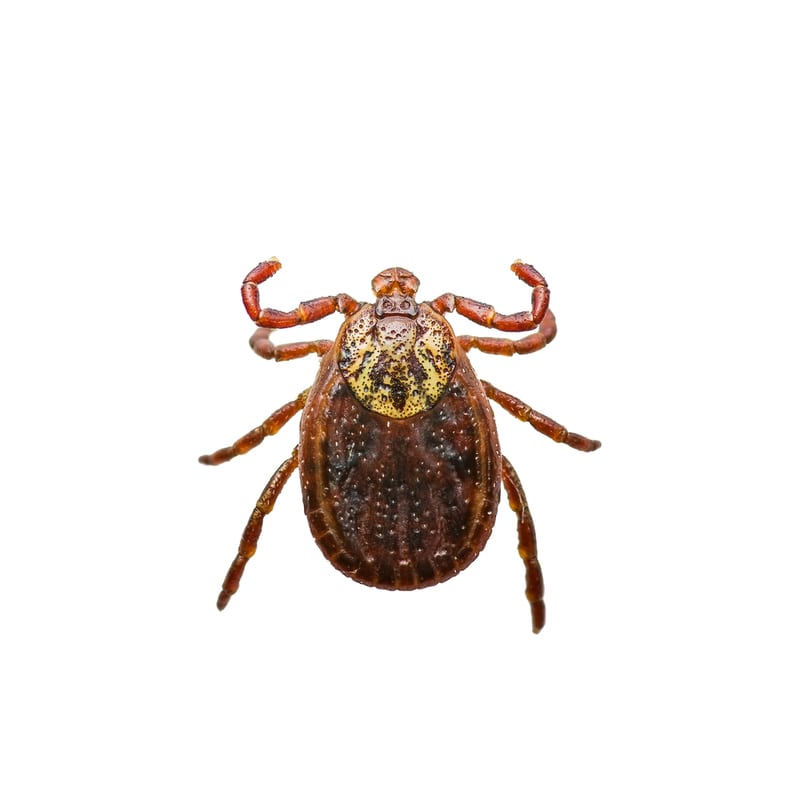 Ticks are related to mites and spiders. As arachnids, ticks have eight legs. Depending on the type, tick color varies from reddish-brown to dark brown and black. The majority of ticks have a flattened oval shape.

An adult tick that has not fed is roughly the same size as an apple seed. However, when they start feeding, tick bodies swell up with blood, making them several times larger and easier to spot

The lifecycle of a tick consists of four stages: egg, larvae, nymph and adult. To progress from one stage to another, a tick needs an animal host to feed on. While some species of ticks, such as black-legged ticks, may only live for six months, other species like deer ticks can live for two to three years. In all cases, regardless of species, they are rugged survivors that can go for long periods of time without food.

Hard ticks usually mate right on the host's body in order to have immediate access to food. After mating, a female tick feeds and lays between 1,500 and 5,000 eggs in small egg masses, typically dropped onto the ground. It takes several months for eggs to hatch. Once the eggs hatch and the larval stage begins, ticks start feeding on the host.

Depending on the type, ticks can feed on mammals, birds, amphibians and reptiles. They need a new host for every stage of life.

Once the tick finds a suitable host, it grips the skin and cuts inside it to insert a feeding tube. Some ticks' saliva contains a mild anesthetic that prevents the host from noticing the cut. The feeding process can take around 10 days. Once it's over, the engorged tick drops off the host. 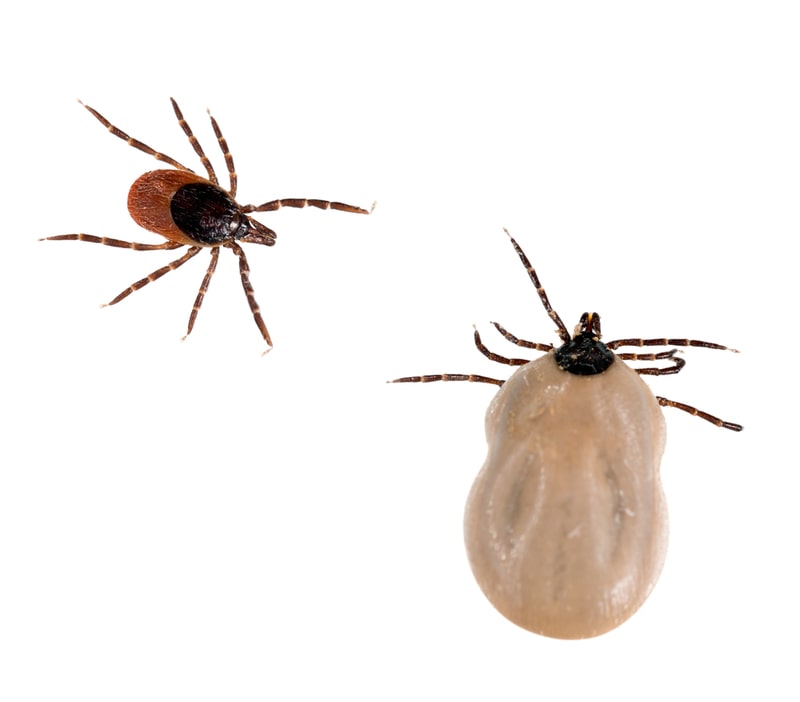 What are tick bite signs and symptoms on humans?

The most common symptom of a tick bite is the presence of a small red bump. That is, assuming of course, the individual bitten reacts. If a bite is severe, a person may experience difficulty breathing.

If the tick transmits a disease during the bite, symptoms vary greatly depending on disease, but a human host may experience full-body rash, headache, neck stiffness, nausea, fatigue, fever, chills, muscle aches and swollen lymph nodes.

According to the CDC, most tick-borne diseases can be treated with a short course of antibiotics. Symptoms indicating whether the tick transmitted a disease-causing pathogen, such as a rash, may take up to 30 days to appear. 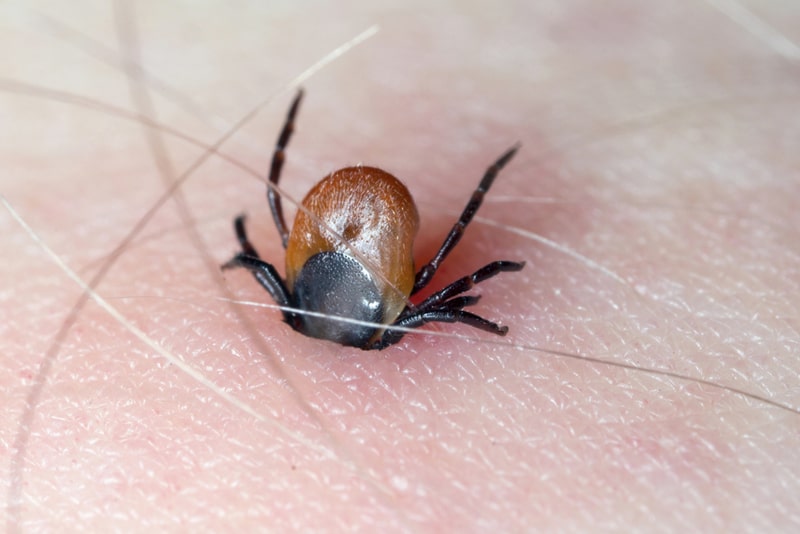 How to identify a tick bite

Ticks are predictable in where they like to attach to humans. Ticks prefer moist and warm areas of the body like armpits, the groin and anywhere under the hair. Once the tick drops off, you may be able to identify the bite as a red welt or an itchy lesion.

If you spot a tick on your body, please follow the CDC's medical advice on how to safely remove it. If you are unable to remove the entire tick body, or if you have symptoms that indicate infection, please seek professional medical assistance.

What health risks or diseases come from ticks?

Are ticks dangerous? Many of them are. Ticks can carry viruses, bacteria and parasites. Although a tick bite will not transmit a disease immediately, it's important to determine if you have been bitten by a tick as soon as possible. For instance, it typically takes 36-48 hours for a tick to infect a person with Lyme disease from the time a person was bitten.

According to CDC, ticks transmit a variety of diseases, including:

Besides transmitting diseases, ticks bites can cause allergic reactions and infections in some people. While the majority of them are mild, some cases can require immediate medical attention.

What are the common types of ticks?

Of nearly 90 tick species found in the United States, these are among the most common types of ticks:

Where do ticks live?

Ticks typically live outdoors in woody or grassy areas and are found throughout the United States. The regions with the highest numbers of tick-borne diseases are in the Northeast, Midwest and Southeastern states.

Ticks are mostly hitchhikers: They climb aboard an animal or human that brushes up against them in tall grass or woodland areas. Once attached to a human or pet, most ticks feed, then push away from their meal to molt or lay eggs in ground soil. However, pets and humans may unknowingly carry ticks inside on their fur, clothing and exposed skin.

How do ticks spread?

Ticks are slow crawlers and even slower climbers. The only way for them to spread to new areas is to hitch a ride on their animal and human hosts. Ticks live outdoors, but may be carried indoors, although rare. However, if they do get indoors, ticks may get a second chance to feed off humans and their pets.

In addition to preparing yourself to avoid ticks outdoors, you can make them unwelcome in your home. When you return from a trek through tall grass, bushes or woodlands, the CDC recommends that you check pets and your clothing for ticks. Clothing may be washed and dried, according to manufacturer instructions, to remove any ticks you might not initially spot.

Who is at risk for getting ticks?

Since ticks prefer grassy, bushy and woody areas, lovers of the outdoors (campers, gardeners, hunters) are at risk of getting ticks. Because ticks are found throughout the United States, any time you go into the woods or walk in tall grass, you risk attracting a tick.

How to avoid tick bites

Here are a few useful ways to avoid tick bites:

Many people find ticks in their backyard. You can avoid such unpleasant encounters by having your yard treated for ticks.

Terminix professionals are trained to provide high-quality tick treatment solutions to help you avoid hosting ticks while enjoying your own backyard. To make sure ticks don't come back, you will need regular inspections and treatments.

If there are ticks on your property, or you want to keep them away, please contact us for a free quote. From there, Terminix pest control specialists can recommend a customized tick control treatment plan.

Get started with tick control today

Tick Behavior: What Do Ticks Do?

How to Spot a Tick

The Life Cycle of a Tick