Termites have a reputation for causing extensive structural damage as they eat through wood, and nobody wants to find them in their home. 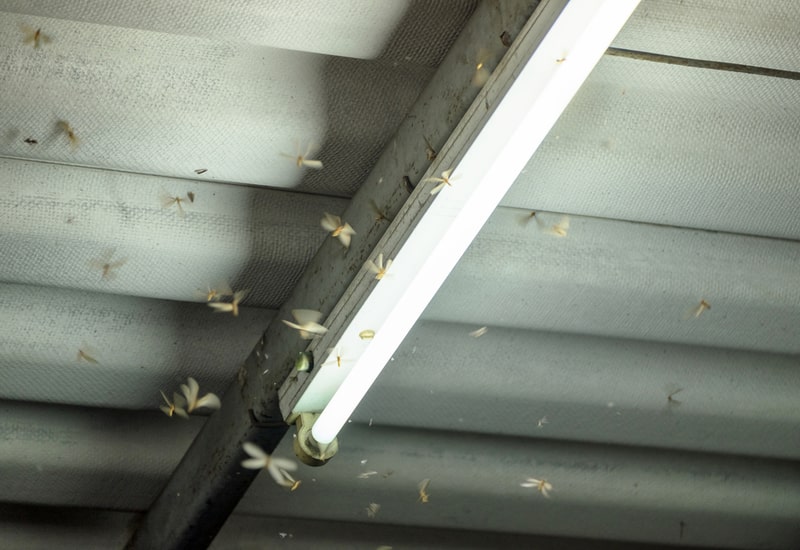 In fact, a well-organized Formosan termite colony can have as many as several million termites that can consume more than 25 pounds of wood in a single year. Often, termites can go undetected, slowly causing serious problems that result in expensive repairs.

And did you know some termites can fly? Flying termites, which can be present during certain times of the year, may be a sign of a potential problem. Find out how to get rid of flying termites if you have them in your home.

What Are Flying Termites?

Flying termites are also known as "swarmers" or "alates." These are reproductive termites, and they have one job: to leave the colony, find a mate and a suitable location and establish a new colony that will become home to thousands, or sometimes even millions, of new termites.

If you see a flying termite, it's most likely a subterranean termite, depending on what part of the country you're in and the time of year it is. These termites live in colonies underground and move around through mud tubes.

Subterranean termite swarmers usually develop and appear when a colony is between three and five years old. Typically, swarmers emerge from the ground, tree stumps or cracks and holes in the foundation of a building.

The exact timing of a swarm depends on several factors, including geographic location, temperature, rainfall and humidity. Many subterranean termites will begin swarming in the spring in the southern United States, when there is plenty of rain and climbing temperatures, and humidity levels begin to rise.

How to Identify Flying Termites

Swarming termites are relatively easy to identify, although they are commonly confused with another pest: the swarming ant. Like termites, these ants are reproductives, and there are many species that can swarm. However, swarming carpenter ants are most often mistaken for termites.

The first identifying factor of a termite swarmer is its wings. These termites have two sets of wings that are equal in size. Ants, in contrast, have large forewings and smaller hind wings.

Flying termites are about an inch long, and they are generally a dark brown to black color. They also have broad waists and straight antennae. Flying ants have narrow, or pinched, waists and bent antennae.

Are Flying Termites Attracted to Light?

Swarming termites are attracted to light, so you may see them near windows, doors, and vents during the day time.

Formosan termites swarm at night, and are attracted to any type of night lighting, like porch lights and street lights.

If you see flying termites in or around your house, you'll want to contact a termite control professional immediately to inspect your house for termites. Termite swarmers are an indicator that there may be an active colony nearby. Although these termites have wings, they're not very good fliers, and they usually don't travel more than a few hundred feet from the location of their original colony.

One silver lining about swarmers is that they can alert you to a termite problem because, as mentioned, these pests often go undetected. On the flip side, though, if you don't do anything about them, there's a chance you could wind up with a whole new termite colony on your property, and that's not good.

How Do You Stop Flying Termites in Your House?

As a homeowner, you should be on the lookout for signs of termite activity. In addition to swarmers, these include mud tubes, which are often visible on the exterior of a structure and indicate where the pests are entering and exiting. Homes with concrete slab foundations are more susceptible to termite infestations because termites can crawl through small cracks in the slabs, and mud tubes are often visible here.

You can help prevent termite infestations in your home by:

It's smart to turn to the professionals when you're wondering how to get rid of flying termites. If you see signs of an infestation, the termite control professionals at Terminix can help you get rid of the problem. It all starts with a FREE inspection.