Why Are There Termite Swarmers?

Why are there termite swarmers? Read on to find out. 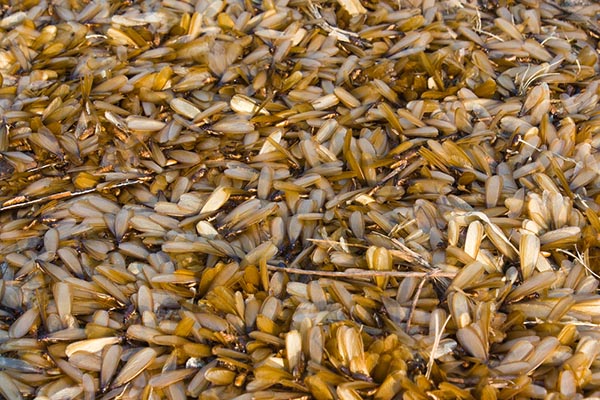 To understand why termites swarm, you first have to understand how termites operate. Termites are social insects that live in a nest, or colony, as it’s commonly called. This colony is made up of several different types of members. The typical termite colony will have a primary king and queen, secondary reproductives (alates), soldiers, workers and nymphs. These members work hand-in-hand to ensure the life and growth of the colony.

How is a termite colony started?

After the primary king and queen mate, the queen finds a suitable place to form a new colony and then begins to lay eggs. A termite queen can live up to 30 years and lay hundreds, if not thousands of eggs per day. Some of these eggs hatch and develop into immature kings and queens. These termites are called ‟alates” and have elongated wings, a straight or thick-waisted body and straight, beaded antennae. The color of the body will vary from solid black, to tan or beige depending on the species. These winged termites will eventually fly from the original nest to mate. This mating flight is referred to as ‟swarming.”

Why do termites swarm?

When environmental conditions such as warm temperatures and high humidity occur, this triggers the instinct of the immature kings and queens to fly from their colony to mate and start a colony of their own. This is simply a natural survival instinct to continue the existence of the species.

Why is it called a swarm?

This mating flight is called a ‟swarm” because of the sheer number of flying termites emerging from the colony. Most species produce large numbers of flying termites to ensure enough will survive to continue the species. Swarming termites do not fly very well and many fall prey to predators such as birds and other insects. Some are carried off by wind currents, smashing into cars and trees. In fact, only about 10 percent of the actual number of swarming termites survive this mating ritual.

Does killing the swarmers solve my termite problem?

Unfortunately, no. The swarming termites are not the colony members that consume wood, thus causing the damage. The culprit that wreaks havoc on the wood in your home is the worker termite. The swarmers depend on the workers for food, which is done by regurgitating digested wood to the swarmers.

What if termites swarm inside my house?

It’s not uncommon for termites to swarm inside of a structure. Alternatively, you might only see a few alates that found their way inside. So, why do termites swarm inside your home in the first place? If termites swarm from within your home, it’s a good indication your house may have an infestation. Termites swarming inside your home tend to gather around light fixtures and windowsills because they are looking for a way out of the house to form another colony. Their instinct is to fly toward lighted areas.

Why do termites swarm? Hopefully now you have a better understanding.