It’s getting warmer outside, which means termite activity can heat up as well. Though termites can be found across the United States, they’re typically more prevalent in certain regions, depending on the species. 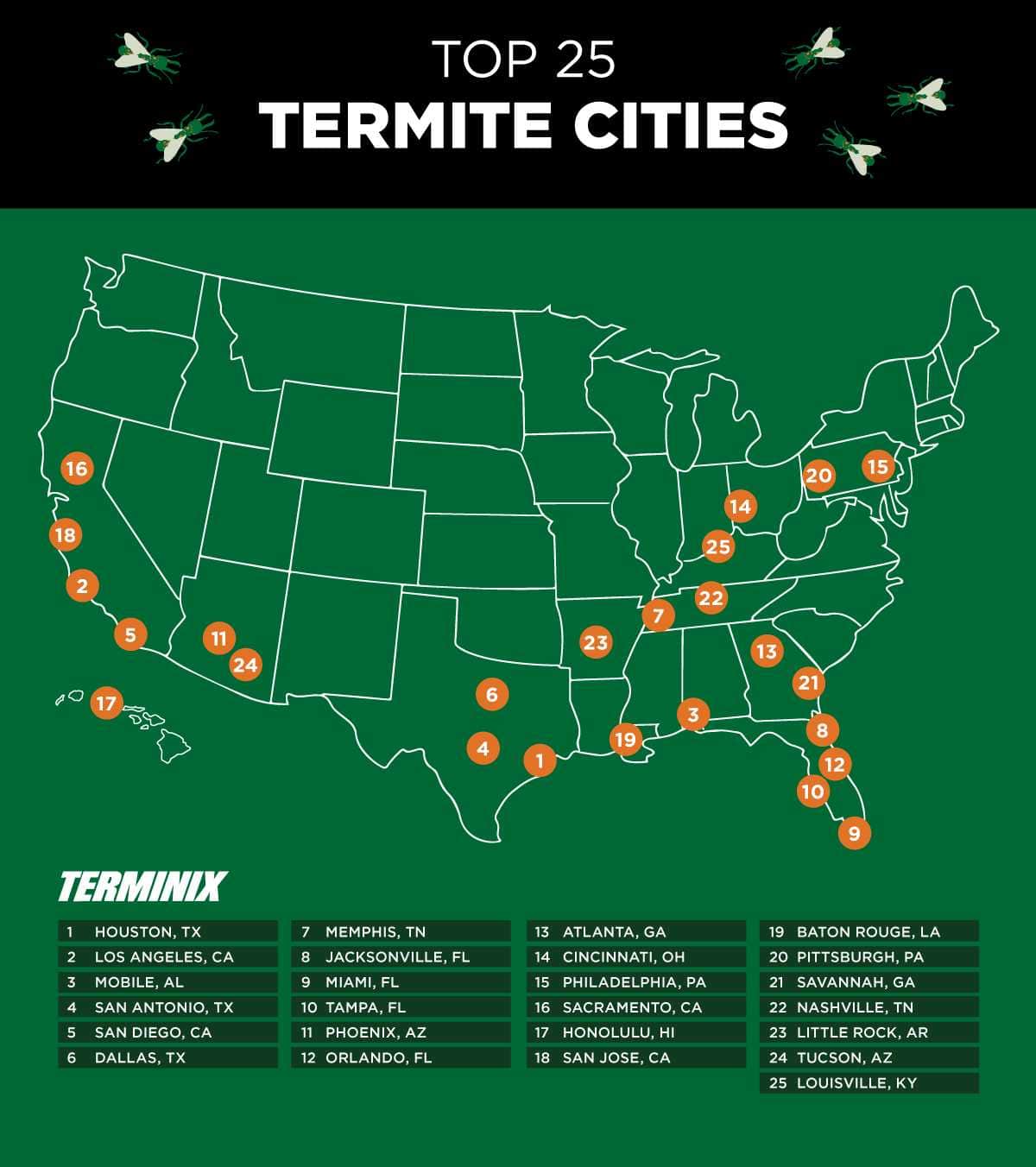 Where are Termites Common?

By using service data across 300 branches across the U.S., Terminix identified 25 cities where residents should be on high alert for termites in 2018, as these cities experienced the highest number of termite services last year*:

However, if you don’t live in one of the 25 cities listed above, that doesn’t mean that you should take termites lightly.

Termites are tiny home invaders ranging in size from one-eighth of an inch to one inch long. They feed on cellulose in the wood and other materials. These wood-eating insects are social and live in groups, together slowly eating wood.

Large termite colonies can eat up to a pound of wood a day. And since these termite remain hidden while attacking a home, by the time signs of an infestation are noticed, a homeowner may have severe and expensive termite damage on their hands.

There are two common termites that can cause a lot of damage in homes:

These termites live underground and can be found in every state in the U.S. except Alaska. Colonies are split into soldiers, workers and swarmers. There are several different species of subterranean termites, including the very destructive Formosan termite.

Unlike other termites, drywood termites do not require moisture from the soil, but rather get all of their nutrition from wood. These termites can be more difficult to treat than other types of termites since they can create multiple colonies within a home.

Termite Damage in the United States

Termite infestations impact more than 600,000 homes in the U.S each year, causing around $5 billion in damage and treatment for homeowners.

To help keep termites from costing them a lot of money, homeowners should be on the look-out for signs of termites. There are also some preventative measures that homeowners can take to try to keep termites from coming into their home, including removal of potential food sources and correction of moisture problems in and around the home.

With termites, DIY solutions often fall short. Termites are relentless and tough to deal with, so it’s best to leave treatment to the professionals. Terminix termite control specialists are trained to spot the signs of a termite infestation, determine which type of termite you’re having a problem with and then properly treat the infestation.

However, you shouldn’t wait until you notice signs of termites before taking action, because then it may be too late as damage may have already been done. Learn how Terminix can help you and then schedule your free inspection.