Snail Behavior: What Do Snails Eat?

Do you know which common garden creature is considered to be one of the most versatile creatures on Earth? 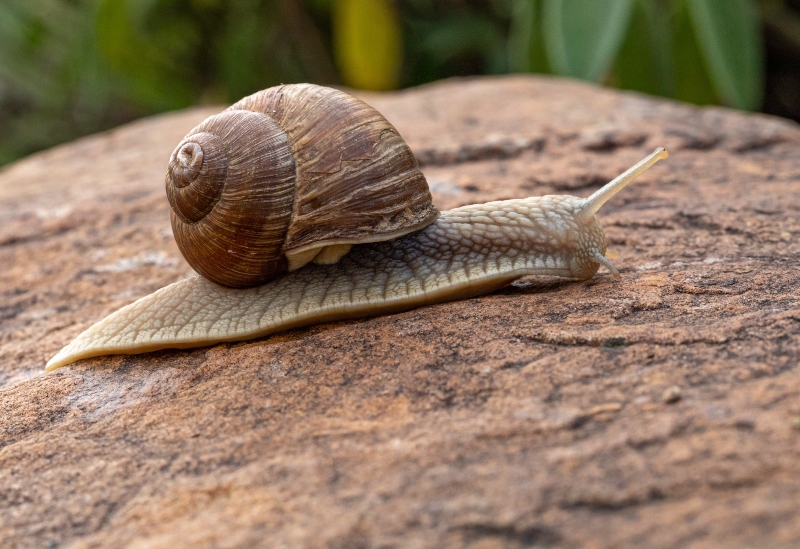 It may come as a surprise to you to learn it’s the snail. These mollusks can be found on five different continents and are one of the few creatures that have adapted to most habitats on Earth. While some species of snail, like the freshwater snail, live in marine habitats, many reside in a variety of environments on land, including desert, mountainous, and forested regions.

In fact, you’ve probably seen these invertebrates moving slowly through your garden or across your driveway. Because snails tend to prefer warm, humid climates, they can often be spotted hanging around gardens and backyards during the summer. Surprisingly, though, snails aren’t only alive in the summertime. Snails may seem to disappear during the winter months, but many species of snails hibernate in order to survive the cold weather.

What Do Snails Eat?

With so much versatility in habitats, what do snails eat? The answer actually depends on the species of snail in question. Many species of snails, like those that inhabit gardens, are herbivorous. As they dwell in green spaces, they feed on fresh leaves, stems, and bark, as well as species of crops, like mushrooms, berries, and lettuce. When it comes to finding food to eat, terrestrial snails are not picky, and it is often the young snails that do the most feeding.

Some snails are also known to be detritivores, which means they feed on decaying matter. Like many other species of invertebrates, some species of snails will seek out decaying organic matter found in the garden.

Other snails however are carnivorous. Carnivorous snails can live on both land and in water and will attack prey based on their physical size and abilities. Some species, like the Haplotrema concavum, will even display cannibalistic behavior as they eat other species of snails. They also like other gastropods like slugs and earthworms.

Because snails are such versatile eaters, you may be wondering, how do these mollusks eat such a wide range of foods? Though it can be difficult to see from several feet away, all snails have a small mouth opening located at the base of their head. While this opening rarely measures more than a few centimeters wide, a snail’s mouth contains a tongue-like organ, known as a radula. What is unique about a snail’s radula is its texture; each radula contains thousands of tiny ridges that function as teeth. These ridges are so small, however, that the true texture of a snail’s radula feels more like a piece of coarse sandpaper.

In order to eat, snails will scrape their radula across a food source. The radula acts in a similar way to a nail file by helping rip and scrape nutrients from the food. Then, the pieces of food pass through the snail’s mouth and esophagus, until finally landing in the snail’s gut to be digested. Though the radula’s ridges are sharp enough to drill through the hard shells of other marine creatures, like mollusks, clams, oysters, and scallops, they eventually wear down over time and must be reformed. Carnivorous snails tend to wear their radula down faster than herbivorous snails, especially those that eat their way through the hard shells of marine creatures.

Eat or Be Eaten

Though snails can eat a wide range of foods, that doesn’t stop them from becoming prey for larger predators. Because these creatures are slow-moving and lack basic defense skills, they often fall victim to other hungry pests. Most often, snails serve as food for birds, reptiles, and small mammals, including rats, mice, squirrels, cats, and dogs. One of the largest snail predators, however, is humans. People who live in European countries and the United States, consume millions of snails each year, though these snails are predominantly raised on farms and not caught in the wild.