How to Identify Mole Cricket Mounds

A well-watered lawn and garden can quickly become home to a number of burrowing pests. Pests like gophers, moles, voles, and ground squirrels can sabotage lawns and leave unsightly tunnels and holes across the surface. However, many homeowners are unaware that certain insects, like the mole cricket, can be just as frustrating to homeowners. In fact, according to researchers at the University of Georgia, the monetary damage caused by mole crickets now is estimated to exceed $20 million annually. 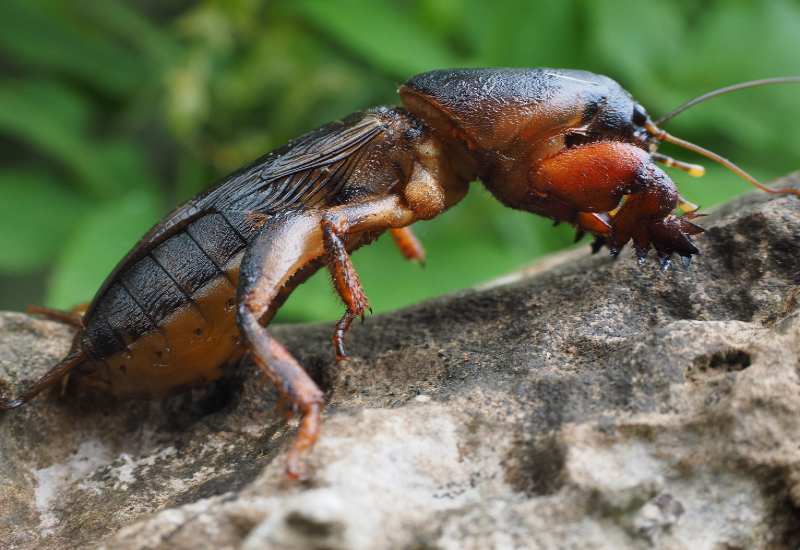 Homeowners trying to identify mole cricket mounds should keep the time of year in mind when confirming the presence of mole crickets. Mole crickets begin mating in the early spring. After mating, these pests take flight on humid nights from late March to early June to search for new locations to lay their eggs. These eggs then begin to hatch during mid-summer, with peak mole cricket activity occurring from late August to October. Still, homeowners living in the eastern and southeastern United States could face a mole cricket infestation at any point in the year.

All crickets, including mole crickets, belong to the order Orthoptera. Like house and field crickets, mole crickets grow to be about 1.5 inches long and have dark eyes. Where the two pests differ, however, the wings attached to their body can vary in size and their front legs are shaped differently. Crickets have long, spindly front legs, mole crickets have short, clawed forelegs that resemble those of a mole. These claws serve as small shovels that help mole crickets dig through dirt and turf. These pests use their prominent claws to burrow tunnels underground that they use as shelter. These tunnels can stretch between 10 to 20 feet long and reach as deep as 30 inches underground, which could cause damage to your lawn.

Unfortunately for homeowners, the aftermath of these tunnels means small holes and mounds of dirt may begin popping up across their yard. These mounds are small, and therefore are rarely confused with the mounds left by larger burrowing pests, like gophers, which can measure between 10 inches to a foot in diameter. Instead, mole cricket mounds can strongly resemble certain types of ant hills in both size and appearance. Most ant hills are small, measuring just a few inches wide, and both ant hills and mole cricket mounds can resemble small piles of tan or brown dirt. However, mole cricket mounds are typically smaller in size.

Additionally, although mole crickets can burrow several feet underground, these pests tend to travel close to the ground’s surface. Within lawns that are made up of sandy soil, this tunneling habit can result in small bulges and thin ridges appearing across the infested lawn. Lawns that are made up of clay soils are less likely to see this damage, because the heavy, moist nature of the clay makes it more difficult for mole crickets to push this soil to the surface. However, this type of damage is still possible.

As they dig, mole crickets feed on grass roots and the roots of other plants, which causes the greenery above ground to turn brown and die. This type of tunneling can also cause the blades of grass to become detached from their roots, which can cause areas with mole cricket damage to feel spongy and loose. A lawn that is facing an extreme mole cricket infestation may even start to see large areas of patchy, dead grass. Though all lawns are susceptible to mole cricket destruction, newly planted lawns can face the most extensive damage. And while these pests aren’t picky, lawns with bermudagrass, bahiagrass, and St. Augustinegrass are most likely to host a mole cricket infestation. Knowing which type of grass you have, and keep in mind the fact that these pests are drawn to overwatered and incorrectly mown lawns, can help you know if your lawn will be a popular target for mole crickets come late spring.