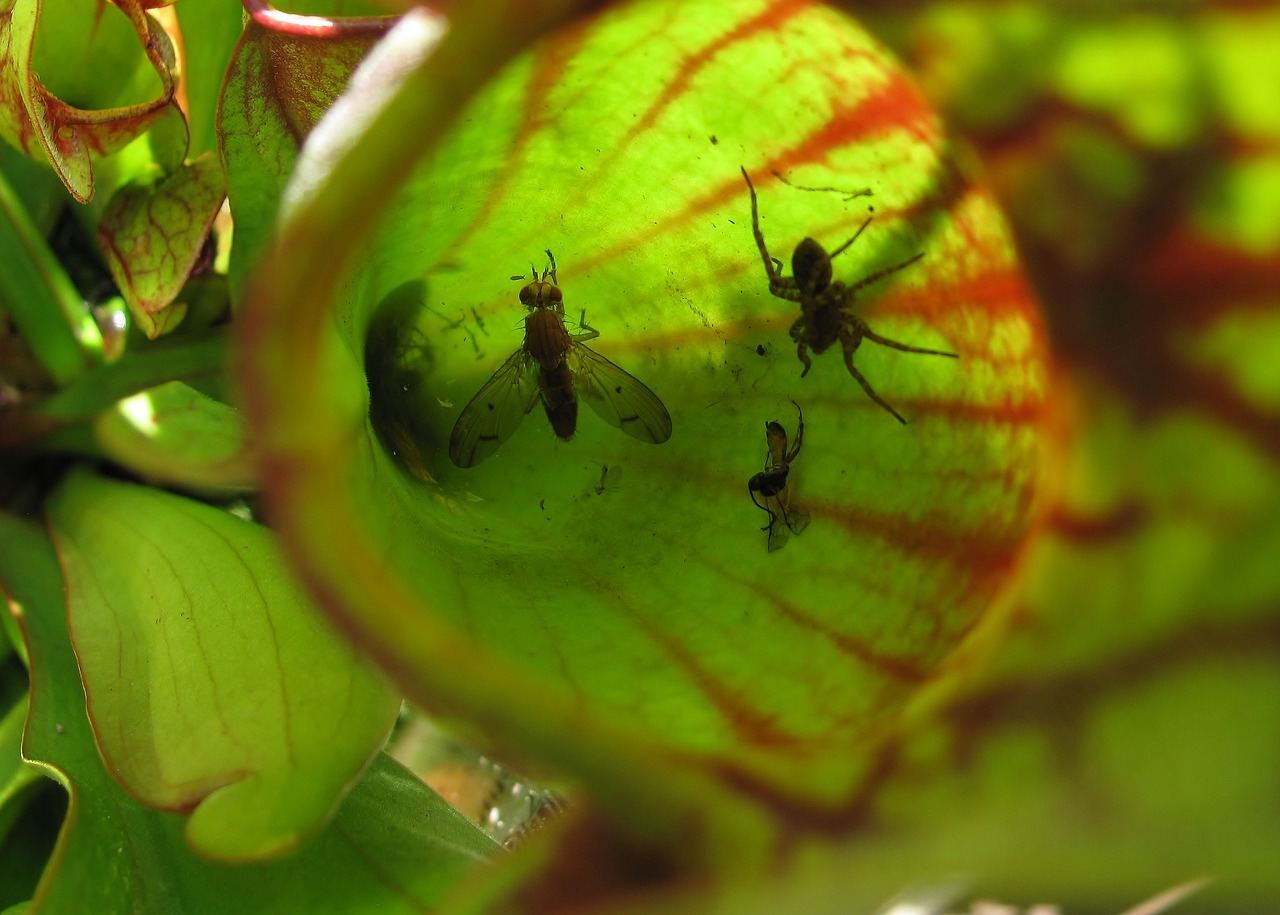 The pitcher plant, as you may have guessed from its common name, has leaves shaped like a long pitcher. This shape of leaf creates a kind of pitfall trap for unwitting insects that wander in. There are many different kinds of pitcher plants found in a wide range of places, though they often grow in poor soil conditions. Because of this, they rely on the insects they catch for important nutrients such as nitrogen and phosphorus. Though there are different types of pitcher plants, they’ll often capture insects in similar fashions: pitcher plants attract insects by secreting an attractive nectar along the lip of the pitcher-shaped leaf. When the bug attempts to eat this nectar, it falls into a liquid pool at the bottom of the leaf trap where it drowns. The pitcher plant is then able to absorb the nutrients from the dead bug. There are about ten species of pitcher plant in the genus Sarracenia native to North America.

The Venus flytrap has a distinct appearance: two hinged lobes at the end of each of its leaves that can quickly snap shut when prey unwittingly wanders in. The Venus flytrap is able to detect if prey has entered its reach by the trichomes, or hair like projections, at the end of each lobe that are sensitive to being touched. After the lobes shut, small bristles intertwine to ensure that prey can’t escape, and the lobes will only shut after the trichomes are touched multiple times so that the plant can conserve energy. The Venus flytrap can be found in North and South Carolina in the United States, though it has been introduced to other eastern states including New Jersey and Florida. Despite its name, the Venus flytrap eats more than just flies, with spiders, beetles, and grasshoppers all making up its diet.

At first glance, the butterwort plant may not seem like a carnivorous plant (at least compared to the fairly distinct appearances of the pitcher plant and Venus flytrap). But in fact, the butterwort plant is able to curl its greasy leaves into a cup to trap any unwitting insects that may have traveled there. The butterwort can be naturally found growing in the Southeastern United States.

Sundew plants, with their glistening leaves, look as if they’re covered in dew. But in fact, what looks like dew is actually tentacles tipped in nectar. It is with this nectar that sundew plants are able to attract the insects that they feed on. Not only does the nectar help attract insects, but it also helps trap them: it is powerfully sticky, so once an insect lands, it may remain stuck. This gives the sundew plant enough time to curl its leaves around any trapped prey. Once the prey is successfully trapped, the sundew secretes enzymes from its leaves in order to dissolve the bug and absorb its nutrients. Sundew plants are particularly present in certain temperate regions of Australia.

Bladderworts are found in lakes, streams, and very wet or waterlogged soil—which is why they are sometimes referred to as floating bladderworts. That’s because bladderworts will float on the surf ace of these bodies of water in order to attract their prey. Bladderworts have many small sacs along their stems that catch their prey and then go on to digest them so that the plant can absorb the prey’s nutrients. It is these sacs that give bladderworts their main common name—the sacs are often referred to as bladders.

Next > Are There Plants That Repel Bugs?