Social insects, such as ants, use chemical cues to recognize nest mates within their colony and this helps protect against predators, competitors and parasites. Who may these invaders be? 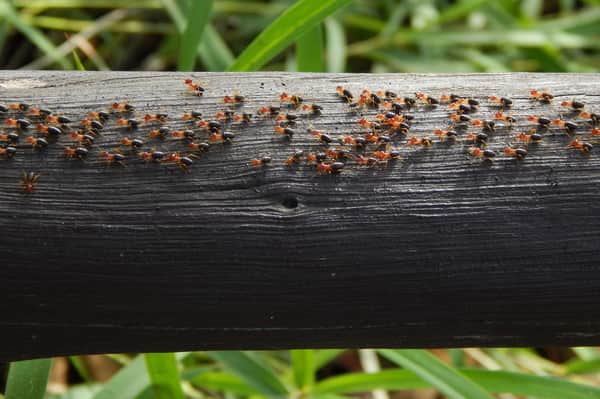 Social insects, such as ants, use chemical cues to recognize nest mates within their colony and this helps protect against predators, competitors and parasites.

Some evolutionary biologists study host-parasite interactions where a parasite (or other entity) may adapt in order to live with and exploit a host. Exploitation of a host may include feeding on the host itself, feeding on the host’s food source (e.g., prey), and/or living among the host population and enjoying a stable, safe environment where the host (unknowingly) provides protection for the invader.

Examples of Organisms that Live with Ants

A study evaluating the acceptance of a silverfish (Malayatelura ponerophila) into a colony of army ants (Leptogenys distinguenda) found that the silverfish acquired cuticular hydrocarbon signatures (smells) from the ants by rubbing up against the ants and this allowed the silverfish to live, unharmed, among the ant colony (von Beeren et al. 2011). The silverfish use the food resources of the ant, hence may be damaging to an ant colony.

Similarly, some species of spiders (Gamasomorpha maschwitzi) can live among army ants (Leptogenys distinguenda) by acquiring ant chemical “smells” while also preying on the ants periodically (von Beeren et al. 2012). Another example of an organism expertly camouflaging themselves among the ants to exploit the ant resources is a snail (Allopeas myrmekophilos) (Witte et al. 2002). Since the snail is slow and cannot keep up with the fast-moving ants when the nest is periodically moved, the snail emits a foamy substance that makes the ants think the snail is part of the brood (young ants). This adaptation in the snail encourages the ants to pick up the snail and carry it with them to the next location (Witte et al. 2002).

A Paussus beetle lives among Pheidole ants by communicating with low frequency sounds. A study has shown that this beetle can mimic sounds made by the queen ant, and becomes treated as though they are royalty (di Giulio et al. 2015). In this case, the worker ants guard the beetle as though it is the queen. By emitting these sounds, the beetles are able to prey upon the ant brood and also unsuspecting adults.

Some species of aphids often live among ant colonies in a mutually beneficial way. Aphids produce honeydew and this is a food source for ants, while ants keep the aphid colony clean and provide protection against predators. Scientists believe that ants actually seek out aphid colonies in order to begin these mutualistic relationships.

Another example of myrmecophile mutualism is in butterflies (Jalmenus evagoras; known as the imperial hairstreak or common imperial blue butterfly) and several species of ants (e.g., Iridomyrmex mayri). In this case, butterfly larvae (caterpillars) secrete nutrient that ants eat and ants protect caterpillars from predators (Elgar et al. 2016). The same study showed that orb weaving spiders exploit this mutualistic relationship and construct their webs near ant nests that contain these caterpillars. Parasitoid wasps are also known to target caterpillars by locating the ant colonies. Predators must be careful to avoid harm from the ants that may defend their caterpillar “friends.”

Interactions between organisms in nature are complex. Myrmecophiles are tolerated, in most cases, provided they are not significantly harming the ant colonies. If the cost of the invaders becomes too high, there may be increasing pressure for ants to reject and/or attack them. Studying these relationships can help scientists better understand systems where multiple parasites and hosts interact.

Next > Food Foraging: How Do Ants Find Food?

von Beeren C, Hashim R, Witte V (2012) The social integration of a myrmecophilous spider does not depend exclusively on chemical mimicry. Journal of Chemical Ecology 38:262-271.