5 Hardworking Insects and the Importance of Their Work

Beavers, horses and dogs are all animals renowned for their diligence. But what about bugs? In 2009, the National Wildlife Federation published a list of the world's hardest-working animals. Given the expression “busy bee,” you may not be surprised that pollinating honey bees made the cut. But what makes an insect truly industrious? These bugs demonstrate some of the different ways in which insects can be considered hardworking. 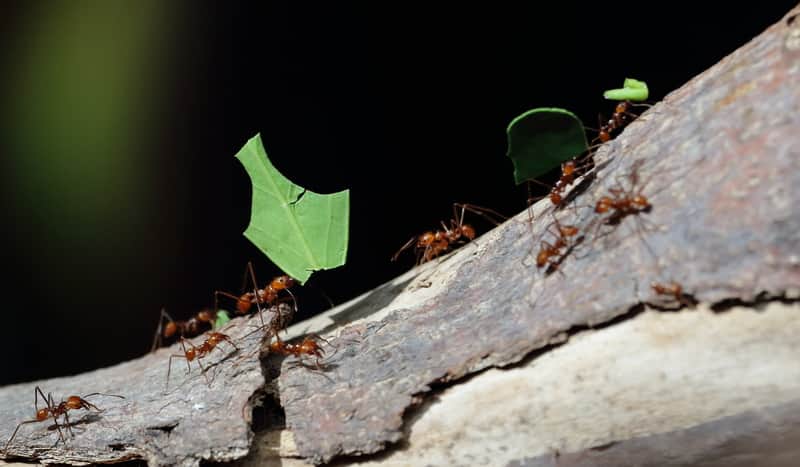 Ants are able to carry up to 50 times their own body weight. Their super-strength is particularly useful for hauling food and defending the nest. Worker carpenter ants may travel up to 100 yards to gather food – not too shabby for an insect that’s only about an inch long.  Carpenter ants, along with termites and many species of beetles (both of which are mentioned below), also work hard to break down wood in fallen trees, ultimately returning to the soil and keeping forests in working order.

In their quest to gather the nectar needed for honey production, honey bees can fly up to 15 miles per hour, according to the University of Georgia College of Agriculture and Environmental Science. Collectively, honey bees must fly 55,000 miles — a distance equivalent to twice around the Earth — and visit two million flowers just to make one pound of honey. Each bee may fly up to 12 miles per day. And while they are collecting all of the pollen for their honey, they are also pollenating the flowers they visit. Many of those flowers will help produce much of the food we eat. A colony typically produces about 50 pounds of honey per year.

Like their cousins, the ants, honey bees organize themselves into classes and task themselves with specific jobs. Worker honey bees are infertile females that handle colony maintenance tasks. They feed the young, care for the queen, remove debris, handle incoming nectar, build beeswax combs and guard the hive during their initial few weeks as adults. They also forage for nectar, pollen and water.

When they’re not busy caring for the young, worker bees also cool the interior of the hive. Bees thermoregulate so that the temperature at the center of the hive stays at 93 degrees Fahrenheit. When it gets too hot, the worker bees fan air over droplets of water to lower the temperature. It seems honey bees are hardly ever not flapping their wings.

Worms are not technically insects, but they are frequently treated as such. However, silkworms are not actually worms. The silkworm is the caterpillar (or the larval stage) of the domestic silkmoth (Bombyx mori). Like farm animals such as goats, cows and chickens, silkworms have been domesticated. In other words, human beings have selectively bred silkworms in order to maximize their most hardworking and useful qualities.

The popular image of the dung beetle is an iridescent black insect rolling a carefully packed ball of animal dung across the desert floor. In fact, the dedication dung beetles show to this task was so fascinating to the ancient Egyptians that the scarab (the insect family to which dung beetles belong) was considered a sacred animal. Constantly harvesting, transporting, burying and otherwise minding their precious cargo, dung beetles are anything but lazy.

In one study conducted in Maine, dung beetles cleared an entire pasture's worth of white-tailed deer feces in less than five days. Some dung beetles are even equipped with ant-like super-strength and are able to lift 250 times their own body weight.

These hard-working social insects may not be admirable, especially if you've ever suffered through a termite infestation, but they are extraordinary. Best estimates suggest that these tiny, wood-eating insects cause $5 billion in property damage and treatment costs in the United States each year. And the largest subterranean termite colonies, which may contain millions of hungry insects, can consume about a pound of wood per day.

Perhaps it comes as no surprise that some of the hardest-working insects in the world are also beneficial insects, like the honey bee and dung beetle. To learn more about insects, you can visit our Education or Bug Facts section on the blog.