Seeing as how gnats are one of the most common household pests, they are often confused with other types of small flies such as fruit flies and drain flies. Gnats are small, pesky, two-winged insects that frequently invade homes and businesses. Because each species of gnats can take on a unique appearance and behavioral habits, it’s important to know the difference between the various species of gnats that can appear inside your home. 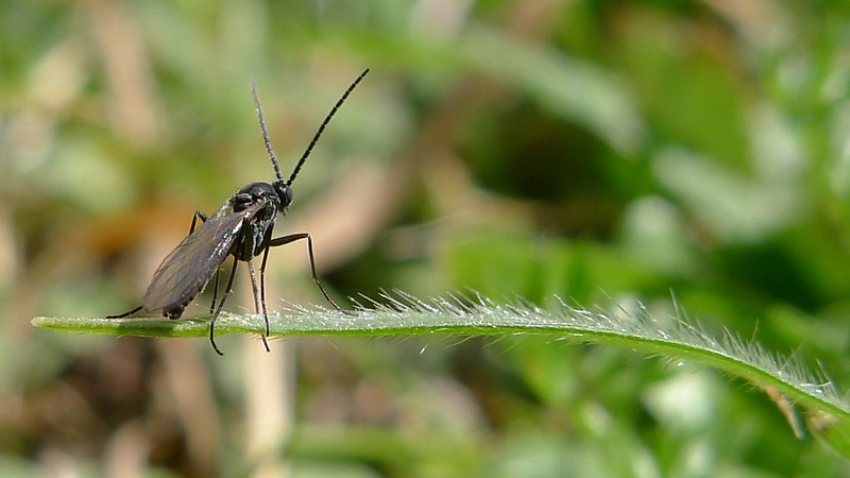 If you notice tiny brown insects flying around your house plants, it’s very likely that these pests are fungus gnats. Because of their long, spindly legs and brownish-white bodies, these pests are often confused with mosquitoes, though fungus gnats do not bite according to Cornell. Fungus gnats rarely grow larger than one-eighth of an inch long and use their long, transparent wings to fly from plant to plant.

During reproduction, fungus gnats seek out moist soil to lay their eggs, of which they can lay up to 300 at a time. When they do, it only takes a few weeks before these eggs mature into adults and begin feeding on plant material. They can eat anything from fungi, roots, and algae, to grass, and leaves. A plant that has been infested with fungus gnats may begin to wilt or yellow.

Buffalo gnats, which are frequently referred to as black flies, also grow to be approximately one-eighth of an inch long. This species can be recognized by the small hump that lines their back, as well as their wide, transparent wings. Buffalo gnats prefer wet environments, so you’re most likely to encounter these pests near small bodies of water, like ponds and rivers.

Unlike other gnat species, buffalo gnats can be dangerous. Female buffalo gnats require blood to reproduce and will fly up to 10 miles away to find a proper blood meal. According to experts from Purdue University’s Medical Entomology department, “The bites of black flies cause different reactions in humans, ranging from a small puncture wound where the original blood meal was taken to a swelling that can be the size of a golf ball. Reactions to black fly bites that collectively are known as ‘black fly fever’ include headache, nausea, fever, and swollen lymph nodes in the neck.” Though these pests can be found throughout the United States, their impact on outdoor activities varies depending on the specific region and time of year.

Eye gnats, more commonly called frit flies, measure just half the length of other gnats and rarely grow larger than one-sixteenth of an inch long. They have round, black bodies with tan or brown wings and legs. Eye gnats prefer to live in environments with sand or sandy soil. This makes coastal states like California and Florida most likely to host large populations of eye gnats, though these pests can survive in many environments.

What attracts these pests to humans and animals is a specific protein found in the fluid secreted from eyes, ears, and noses. Though these pests do not bite, they can transmit certain diseases when feeding on these bodily fluids. Experts from the Entomology and Nematology Department at the University of Florida have stated that eye gnats “have been implicated in the transmission of several diseases to humans and livestock including human acute conjunctivitis.” In other words, eye gnats are capable of spreading pink eye to the humans and animals they touch.

If your home is experiencing a gnat or small fly infestation, the first step is to identify the fly. Take it to a local extension office or university, or take a picture and request an identification from an entomologist. Many pest service providers have at least one entomologist on staff that can provide insect ID and tips on control and prevention.